Mummy Monks in the Czech Republic? 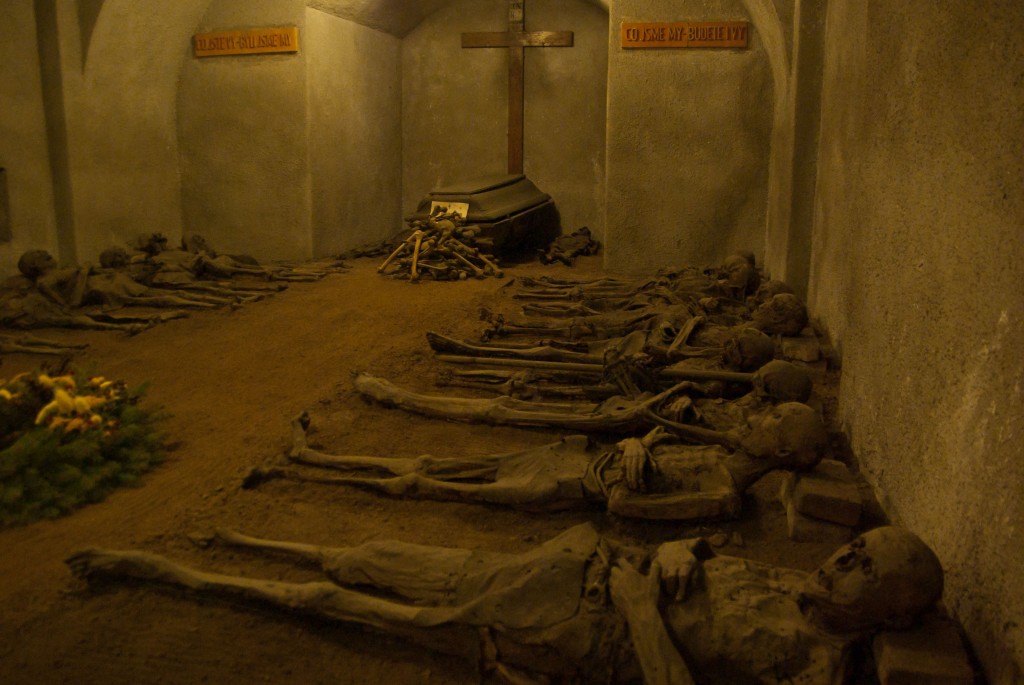 We usually associate mummies with Egypt however; you don’t need to be a pharaoh to be mummified. In Brno, Czech Republic there are mummies. Mummification happens when you have an environment that allows very little bacteria to grow and therefore the flesh dos not decompose, as we learned in class a few weeks ago. This only partially decomposes the body, and gives a “tanned” effect. The mummification of the monks in Brno is not like the mummies of Egypt. The mummies of Egypt have been mummified by wrappings and preparation, they where meant to be mummified. The monks in Brno were mummified by accident.

When I say Capuchin I don’t not mean the monkey; the Capuchin is an order of monks found around the world.

You can find more information about this order at this link…

The Crypt and church in Brno where founded in the mid. 17th century. The crypt of the Brno monastery is located in the basement, which is probably basement space left over from houses originally in that location. When the monks died they where brought to the basement in a coffin on a mobile gout. The coffin used was the same coffin used for every monk for one hundred years. Once there, they where lain down with a few bricks below their heads. The monks where located in the crypt below the alter. This placement below the alter is very symbolic in the Christian faith, in the bible it states that below the alter of God in heaven lie the souls of the Saints. The monks were not meant to be mummified but due to the environment of the crypt the monks where mummified in place. 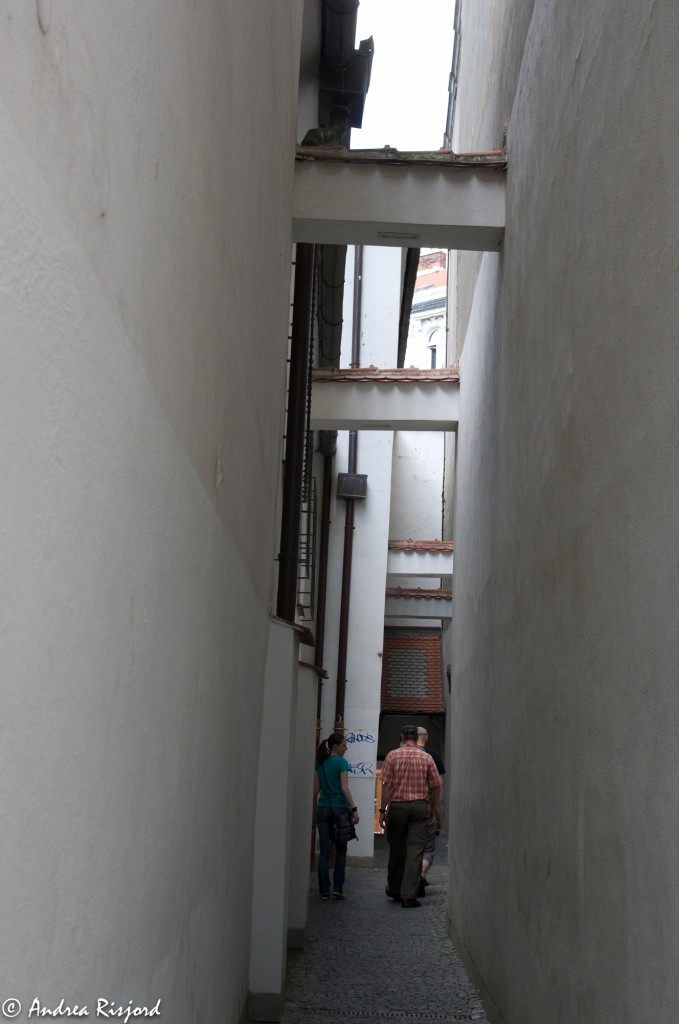 The church is still standing today and you can go and view them in the same position that they where lain when buried. The entrance is located behind the church in a small white courtyard. It is reached by walking through abnormally (by today’s standards) narrow alleys with whitewashed walls and small beams holding lanterns high above the street. Some of the monks have the hoods of their cloaks pulled up over their heads to symbolize a special unit within the Capuchin order. Other monks are buried with objects. There is a monk who was buried with a rosary and a wooden cross signifying some status that he held in life.

Mummification did not only happen to the monks, other members of society where placed in the crypt and where subject to the same mummifying conditions. If you go to the monastery today you can view all of the remaining mummies in the crypt, there are about 25 monks and a handful of townspeople of various class. You can see a high class family that was mummified in all their finery as well as some choir boys and a doctor. There is also the body of a Saint in the crypt in Brno. this particular Saint is prepared in the “Spanish style.” She is dressed up in clothing that shows the bones. Saints bones are very important because thy are primary relics of the Siant. Having the whole body of a saint would be really important as well because that saint would be the church, monastery, and even the town’s patron. The patron saint of a place, in the middle ages, would be the protector of the people against all enemies, divine or mortal. This saint has been placed in a glass coffin to allow visitors and pilgrims to see the body but not to touch it, increasing the otherworldly sense associated with the divine. 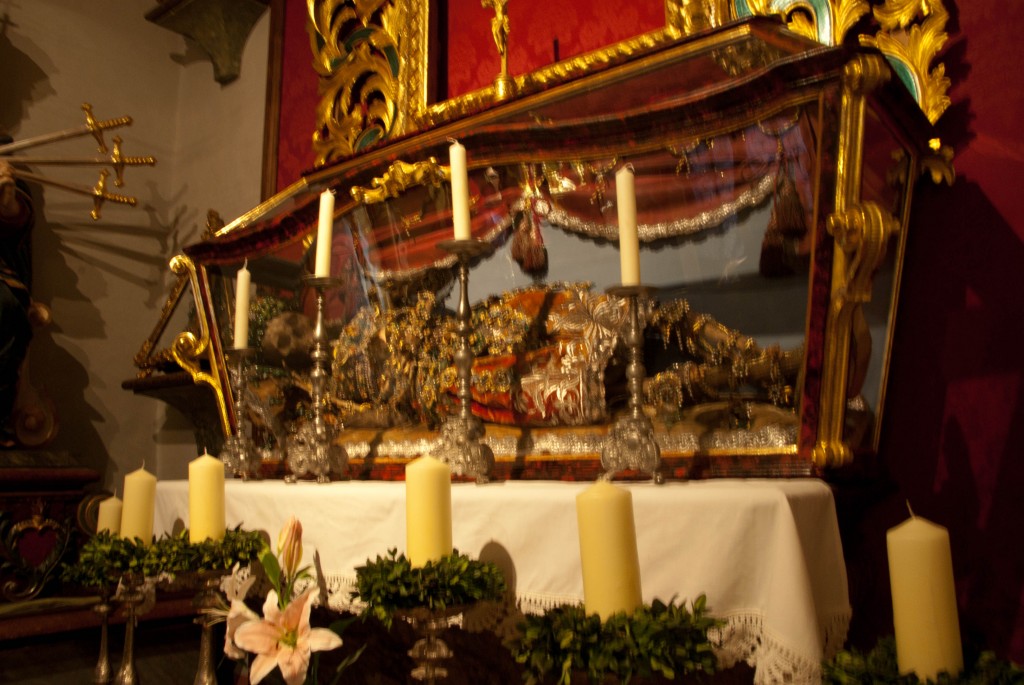 To me this is interesting because I wonder how the people of the community viewed the mummified bodies from a spiritual standpoint. The fact that the crypt held the remains of monks, commoners, and a saint is also unsual. In the middle ages a saint’s remains where placed in a high ranking location to be viewed and worshiped by the people, not near the bodies of the locals. This change in the organization of the crypt is obviously changed for a museum set-up but It is still curious that all of these bodies where found together in the same location.

Almost all the information on this monastery and church is in Czech, a language that I do not speak, however it is interesting to think about how the community would react to finding members of their community mummified in the crypt of the church.

If you are not expecting a body to be mummified, how does that affect how you deal with the death?

If, in the future, we discover that out relative that we had buried as a child had been mummified; how would this affect our grieving process? Would this change our perspective on this person or their death?