Fear of the Rising of the Undead

Eating your way out of your grave sounds like something from an old kooky horror television show like Buffy the Vampire Slayer; in renaissance Venice, it was a terrifying reality.  According to folklore, a corpse-turned-vampire would chew its way through its funerary shroud and emerge from the grave as a fully-fledged “traditional” vampire.  The only way to defeat the vampire was to wedge a brick in the corpse’s mouth to prevent it from chewing.  This particular myth of the vampire was perpetuated by the plague in the 16th and 17th centuries.  Plague victims were buried in mass graves; when another person died, the grave was reopened to add their body and once opened, the gravediggers met with a very unfortunate surprise.  The corpses already inside the grave seemed to have already attempted to eat themselves out; the shroud covering the mouth had been worn through and stained very dark.  The terrified grave diggers would shove a brick into the “vampire’s” mouth to make it unable to chew and then re-bury it.  Had the shroud been stained by the draining blood that the vampires had drunk before being buried? 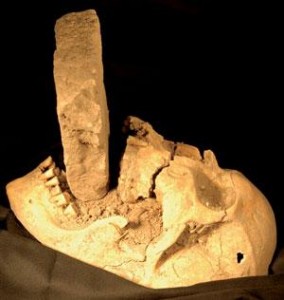 Skull of an “exorcised” vampire

Not really. This dark stain was caused by a fluid created from the decay of the gastrointestinal tract contents and lining that had then poured out through the nose and mouth.  The worn cloth was the result of putrid gases and moisture produced by the decaying corpse.  Even the gaping mouth is natural.  Everything that made the corpses “vampires” was really just the normal process of decomposition.

You can read more about the Venetian vampires here: http://archive.archaeology.org/online/features/halloween/plague.html

The superstition surrounding these particular vampires resulted from a misunderstanding of the process of decay.  In whatever time you live in, digging up a grave and exposing a bloated corpse with a black gaping chasm in place of its mouth would be terrifying, but at least now we have the medical knowledge to understand that the corpse has only undergone natural processes of decomposition.  Without our modern information though, how would you possibly explain this horrible discovery?

People had to come up with a reason of why this corpse was so terrifying.  Postmortem changes such as algor mortis (the cooling of the body) and rigor mortis (the temporary stiffening of the muscles) were known at this time but the corpse was usually interred in the ground while they were still in effect, especially if it was the body of a plague victim.  Naturally then, the corpse had to be alive to move.

The fear of these “vampires” embodies our fear of the corpse.  As a quasi-object, nothing is really definite about the corpse, except that it is dead.  So when a corpse comes back to life, our world turns on its head because now we don’t know anything for certain at all.  That death was apparently not permanent prompted thoughts of evil or Satanic involvement.  Since 16th century Italians were strongly Christian, the Devil’s interferences in the human world were real and terrifying.

Vampire folklore is not peculiar to 16th century Venice.  Other “vampire burials” have been discovered by archaeologists in places like Bulgaria, Poland, and even the Greek islands.  Many of the old cultures of Europe as well as around the world have their own version of the vampire.  They all also had their own ways of dealing with them.  Bulgaria, for instance, buried their vampires with iron stakes through their chests (read more here: http://archive.archaeology.org/1209/trenches/sozopol_bulgaria_black_sea_burial_skeletons.html). Did all of these cultures come up with the idea of a vampire based on the misunderstood decomposition of the corpse?  Or is it simply our imagination running away with the personification of our fear of death?

In a humorous article I recently came across, Vlad III, the prince of Wallachia, was declared to be in the top 10 list of royals who would not have been a good contestant for Facebook. Though not intentionally, this article is a reflection of the recent trend involving vampires. Whether loved or hated, one thing that cannot be ignored is the growing infatuation with vampires. One of American culture’s most recent fads has been the romanticization of these blood sucking creatures. Originally they were seen as cruel and vicious, bringing eternal terror to their victims. The actual person around whom the myth was created was Vlad III Dracula, also known as Vlad the Impaler, mentioned in the humurous article. It is thought that he impaled around 100,000 people during his short lifetime. Clearly there is nothing romantic about Vlad the Impaler. So why is it, then, that we have twisted his excessively ugly existence into something seductive and alluring? How did society go from Vlad the Impaler to the Twilight version of a vampire lover?

It seems that there is something in our nature that does not want to accept the existence of such unrelenting cruelty. We have no way to cope with the presence of such a vile and dark infringement upon reality. And so, we have turned the ugly into the enticing, the profane to the esteemed. Rather than hide from the terrifying death that vampires embody, our culture has begun to flirt with the idea- literally. Possibly as a makeshift coping mechanism, we have romanticized the vampire and given him seductive appeal. This has gone so far as to penetrate into movies intended for children. The recent film Hotel Transylvania depicts a teenaged vampire girl who falls in love with a human boy. What was the catalyst for this shift in perspective on vampires? Or has this been a gradual change on a never ending spectrum? If it is a spectrum, what decides the direction in which it travels? Perhaps this vampire fad is the reflection of underlying cultural unrest. Deeper still, maybe there is something deeply flawed within humanity. Taking the embodiment of a cruel death and turning it into an object of sexual appeal could be viewed as the reflection of humanity’s never ending search for a permanent solution to death. We seem to be trying to control that which in uncontrollable. Rituals give us an accepted way to deal with and mourn for the dead, but they do not solve the problem of death. Perhaps society is searching for a solution to something that cannot be fixed.