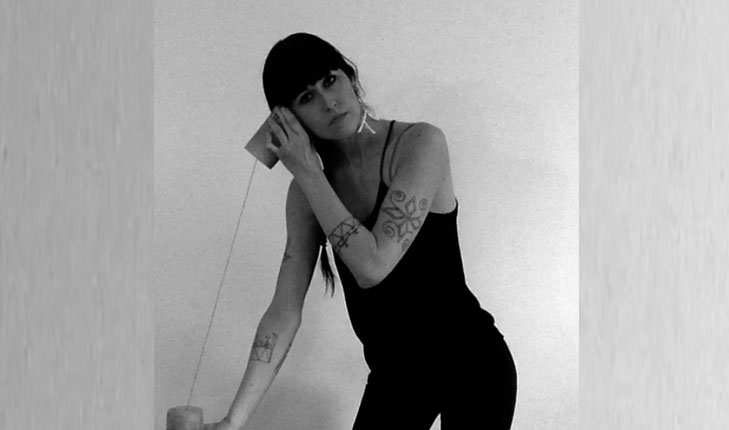 Art is one of the few things in society that is truly subjective – and intended to be. Whether we view the incorporation of light, design, space, texture, color, and other artistic elements as profound, riddled with abstract meaning and interpretation or we see it simply for what it is, we get to decide what art means to us.

And then we must understand how we can use this art to our advantage – to bring a voice to issues and passions that fuel our drive for change as individuals – and as a society as a whole. Often, we see artists embody one moral or cause, but this featured artist embodies them all.

Multidisciplinary artist, Merritt Johnson’s work represents the fluidity of creation that transcends “definition” – or one meaning.  She defines her art as something that becomes detached from her and takes form as its own life. Art, for her, is about “being”. She works with many forms of art, such as, sculpting, painting, performance, creating videos, and more. And in each of her pieces, she ensures that her art stems from a place of creativity versus material (Hutter, “Art Talk with Merritt Johnson”).

“The work I do is all over the place. It’s really driven by ideas and visual language…well I guess vocal language too. It’s not really materially driven. And artists will ask me, “Well, what kind of art do you do?” and I don’t have a material definition for that… I make all kinds of things…out of all kinds of things”, says Merritt in a candid podcast interview with Broken Boxes.

Johnson was born in West Baltimore as the daughter of Kanienkehaka (Mohawk), Blackfoot, and North American settlers. Indeed, she uses her mix Indigenous heritage to give voice and visibility to her experience and perspective. Themes of this work include; engagement with the past/present/future, navigation between space and body, and the bridge between culture and land – which is largely rooted in her Mohawk heritage (Johnson, “About” page) beads, quills and mass produced contemporary clothing to navigate the difficulty of cross cultural disguise, and camouflage in service of protection and aggression”, as she states on her NURTUREart self-written profie (Johnson, “Featured Artsit”).

Outside of growing up in a home where her mother made everything by hand, her love for art began at a very young age when her first idea stemmed from her discovery of Picasso paintings found in a large book in her home. She became fascinated with the imagery she engaged with and how they existed within a function she could not quite explain. Although she possessed a limited understanding of what the art was – she knew she wanted to purse it (Johnson, “Broken Boxes Episode 24). And that she did, earning her BFA from Carnegie Mellon University and an MFA from Massachusetts College of Art. She is now featured in many art exhibitions and performance spaces.

As aforementioned, art can be completely left up to interpretation, which Johnson embraces. She states that her art is, “viewed differently by Indigenous viewers than it is by non-Indigenous viewers or by someone who is not necessarily aware of Indigenous concerns in terms of language and culture and land”.

Johnson stays true to her consistent themes of womanhood, body, and use of non-typical materials to create messages through art as seen in the pieces seen on her website. One of her most recent pieces titled, Fetish (object/object/object), delves into the objectification of the female body. Fetish (pictured below), is a woven basket created from palm fiber, buffalo fur, and faux teeth shaped to mimic the most “desirable/fetishized” features of the female body” (Merritt Johnson, “Fetish (object/object/object). 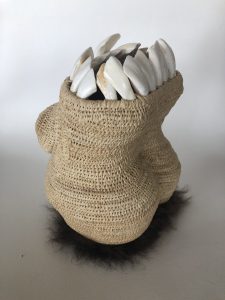 As you can see, the basket is without a head, arms, legs, feet, and any other body part typical to a human being. The extreme reduction and simplification of the female form intends to acknowledge that the ethereal, bodies capable of carrying child is minimized to a mere – object. In the same way, it proves to be empowering because the parts of the female body that are most fetishized are those that are capable of encompassing “life and power”. In her description, she adds her definition of fetishization is to be “simplified, feared, erased, and abused through misguided desire for control and ownership”. In addition to that, the title incorporates the word “object” three time to evoke it’s three meanings in the English language: “material form, something or someone at whom something is directed, and disagreement” (Merritt Johnson, “Fetish (object/object/object). Disagreement is especially pertinent as it applies to the female body in society.

This is one of her many artworks that counter injustice, both as a woman, and an indigenous being. She seems to push boundaries and create an “aha!” moment for all who see her work. She even works collaboratively with other Indigenous artists to combat ingrained societal issues concerning Native American communities.

For example, her work with well-known native artist, Nicholas Galanin since 2014 to create art that sparks expanded conversation. Similar to Johnson’s artistic process in creating her own work, collaboratively, their work begins with an idea, gathering of materials or technology needed, and inclusion of culture to depict the world in a multifaceted way (Indian Country Today, “Exploring the Artistic Worlds of Nicholas Galanin”).

She noted to Victoria Hutter of National Endowment for the Arts,

“’The institutional framing of who we are, where we come from, and how we fit into programming is entrenched in museum structures built without indigenous input.” She adds that Native Americans’ place within these structures become either “amalgamations in the interest of collecting otherness together; or fractured, because they’re separating out what doesn’t fit a linear Western Art historical classification’” (qtd. by Hutter, “Art Talk with Merritt Johnson).

One of her collaborate works with Nicholas Galanin, called Creation with her children, depicts the woman, Creation carving her own face with tools because she possesses the power to do so. It is necessary for her. The woman, who appears to be of Indigenous heritage finds it within her power to create who she is, before allowing someone else to decide for her. Who is this someone? Neither of the artists make this clear but given the common themes and history of both Galanin and Merritt’s work, it could be a nod to the forced assimilation of Native Americans during the 17th – 20th century. Fittingly, the artists note that she is shedding the garments of 17th century Europe and reveals a more modern clothing (Indian Country Today, “Exploring the Artistic Worlds of Nicholas Galanin).

Historically, boarding schools have tried to erase Native American culture  in the late 19th century (Little, “How Boarding Schools Tried to ‘Kill the Indian” Through Assimilation).

Merritt Johnson also performs metaphorical exercise videos on YouTube to bring to light micro-aggressive tendencies and how to correct them through forms of exercises movements – all of which are symbolic for a realistic way to contain these tendencies. The name of this series is Exorcising America. The word exorcising means to expel negative or harmful spirits from a person or place (Merriam-Webster Dictionary), and the pun is found in her demonstration of doing this through exercise   activities.

Johnson uses this worldwide platform (YouTube) to produce to viewers how we can better deliver our good intentions to others without first doing the damage that requires us to then explain those, innately, good intentions. This allows her to reach a broader audience and present a form of art that may not have been received the same way if it was, say, a painting or sculpture. Johnson describes her use of formatted video as a way that people can be led to her work without feeling forced to engage, in contrast with live performance.

She admits to the National Endowment for the Arts that,

“’ Live performance can be off-putting for a lot of people…. I like that the format [video-taped performance] is low resistance that people can try on. I love that people watch these videos that they wouldn’t see in a gallery, but they can just find them on YouTube and get drawn in and there’s all this subtext and layering of things that you wouldn’t have expected to find there’” (qtd. by Hutter, “Art Talk with Merritt Johnson).

As I sifted through numerous of Indigenous artists and attempted to decide just who my profile would be dedicated to, I stumbled upon the work of Merritt Johnson and instantly became more intrigued, by not only her work, but what she stood for. In a society that seeks every opportunity to take a side on an issue, abandons one set of beliefs to encompass those associated with another, artists like Merritt Johnson understand duality. Each of her pieces express another social injustice or misconception or bias that we see far too often, and she uses her outlet, artistry, to contribute her voice to each issue.

Merritt Johnson’s work challenges patriarchy, non-Native ideologies, misconceptions about art/ her role as an artist, and the Eurocentric standard held in the fine arts community while celebrating Native culture and Indigenous womanhood.

“‘I feel responsible for speaking to the way things are, and to envision a possibility for the future with ourselves in it, as we are and as we can be, in positive ways – as Octavia butler, said of “writing ourselves into the future’.” Johnson asserts (qtd by Hutter, “Art Talk with Merritt Johnson’).

And she continuous to uphold this responsibility through her work.

2 Replies to “Art with a Voice: A Profile on Merritt Johnson by: Jordyn Turner”