“Water is Sacred. Drink something sacred. This is my campaign to get Natives to drink more water. If it works, it will all be worth it.”-Duane Brayboy-Williams, Tuscarora

The issue of poor water preservation is prevalent all around the world, and on the rise. There’s an abundance of activists making speeches, starting fundraisers, and spreading awareness on the topic. However, what sets water rights activist Autumn Peltier apart is her age and strong Native American heritage.

The inspiring thirteen year old has been advocating for clean drinking water all across Canada since the age of eight (Alex, “Meet Autumn Peltier”). Indigenous to the Anishinaabe tribe of Northern Ontario, water holds a sacred meaning to her and her people. She believes that advocating for the quality of water is an honor to water itself and Mother Earth (Kent CBC). She enjoys meeting people from all different places and learning about issues specific to them, and furthermore seeing if there’s any way she can make a difference in their lives (Peltier CBC).Given her young age, she has a lot more insight on water preservation than people would expect. Much of her knowledge about the pressing water crisis is due to her Aunt, Josephine Mandamin. Mandamin has been an advocate for clean and sacred drinking water for a long time, and passed down her line of work to Autumn (Johnson CBC).

Autumn has already made a name for herself both in the Native American community and clean water activist community through the amazing opportunities she’s worked so hard for. Her momentum started in 2015 when she took part in a cultural camp in her community that focused on educating kids about natural resources (Johnson CBC). Through the camp, she was invited to represent indigenous youth in Canada at the Children’s Climate Conference in Sweden, and she spoke directly to Prime Minister Justin Trudeau at the AFN’s annual winter gathering (Alex, “Meet Autumn Peltier”). This in addition to her nomination for the 2017 International Children’s Peace Prize, and her Sovereign’s Medal for Volunteers (Marchildon Global Citizen). Most recently, she was given the honor of delivering a speech to the United Nations General Assembly on World Water Day, March 22nd (Kent CBC). 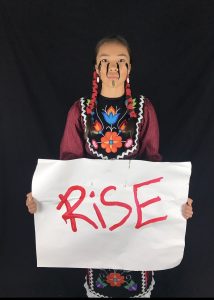 In her speech, she not only spoke to the factual aspect of the issue, but spoke about a lot of the cultural significance behind her anger. It’s not traditional to be personal or vulnerable in a United Nations address, but it helped her get her message across. The United Nations is used to having world leaders using bureaucratic language, according to spokesperson Brendan Varma (Kent CBC), but Peltier still made an impact on them.

There are some indigenous communities that have been without access to clean water for over thirty years, and it still seems as though government officials haven’t been taking them seriously. Water has held a sacred value to Autumn’s people for many generations, and in her address she explains why. Her elders taught her that water is sacred because it’s the basis of so many living things (Peltier CBC), and even humans are almost 70% water. It’s so highly regarded she explained in her speech,

“Many people don’t think water is alive or has a spirit. My people believe this to be true. Our water deserves to be treated as human with human rights. We need to acknowledge our waters with personhood so we can protect our waters” (Peltier).

Multiple times throughout her speech, she wanted to stress the fact that she was advocating for the rights of everyday people, not just rich people. She was specifically invited to speak as the “representative of civil society” (Kent CBC). Peltier went on further talking about her concerns not only about the present, but how this crisis will carry on and affect her people in the years to come. She expressed to the United Nations,

“No one should have to worry if the water is clean or if they will run out of water. No child should grow up not knowing what clean water is or never know what running water is. One day I will be an ancestor, and I want my great-grand-children to know I tried hard to fight so they can have clean drinking water” (Peltier).

Overall, it seems as though the Assembly at the UN had a receptive reaction to her address. Her age and social status made it all the more alarming and “in our faces” (Henk Ovink).

Her approach to her speech to Prime Minister Justin Trudeau in December of 2017  was slightly different. Her audience changed given that Trudeau has already supported a number of pipeline projects in the past (BBC news “Teen Activist Autumn Peltier”). He promised to solve this crisis in 100 First Nation Communities by 2021 (BBC news “Teen Activist Autumn Peltier”),and Autumn touched upon it in her speech. The goal seems far from in reach and she reacted to this issue saying, “I’m very unhappy with the choices you’ve made” (Peltier). Her two big speeches had different tones due to the fact that Trudeau has a lot more experience with the water crisis specifically pertaining to Native American communities. Peltier was clever in her approach in these two different settings, and it shows her understanding of audience, tone, and message.

At the age of thirteen, Autumn peltier has made enormous strides for clean water advocacy not only in indigenous communities, but all around Canada and the United States. She’s spread her agony by formal speeches like to the United Nations, but also personally going around in local communities and schools. One could question the accuracy in her information and her credibility due to the fact that she’s so young and comes from such humble beginnings, but I think it makes her intentions pure. Not to mention the history of water advocacy in her family. She’s not doing any of this for money or fame, but for the reason that water is in her heart, as she stated to the UN general assembly. 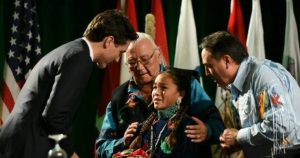