Every culture has some sort of power dynamic between young and older people. Usually, the gap between generations causes elders to look down on the youth. In any culture, ignoring the youth is easy because they have no authority or power in society, so their voices are easily swept aside, using their lack of experience as an excuse. The relationship between elders and young people is particularly prominent in Native American communities. When given the opportunity to use it, young indigenous voices can often be the most powerful. Daunette Reyome’s presence in the media is no exception. Daunnette Reyome, a 16 year old (according to her Facebook page as of September, 2018) from Nebraska and a proud member of the Omaha tribe, took the modeling world by storm at a young age. She has appeared in multiple pieces by Teen Vogue, where she gained a lot of media attention at 13 years old. In addition to modeling, Reyome speaks out for her community and young Native Americans everywhere by telling her truth as an indigenous person living in the United States today. She fights against cultural appropriation, which is an ongoing issue in the fashion industry, and the many stereotypes that have been thrown onto Native Americans. Her presence in the modeling industry has shattered the conceptions of what the beauty standard should be as well as shed light on many hardships Native Americans must endure in the United states.

In a video with Teen Vogue in 2016 entitled “Daunette on What Being Native American Means to Her,” Reyome discusses her relationship with her identity. Having grown up in Nebraska on a reservation, Reyome’s Native American identity is something she takes a lot of pride in. She acknowledges the values her community has instilled in her, emphasizing her connection to individuals, her community, and the earth because of her culture’s spiritual beliefs. When approaching how the rest of the world sees her community, Reyome is quick to say that she wants her presence to be recognized in society. She is also adamant on breaking stereotypes of Native Americans, refuting the idea that her people get free handouts from the government or that all indigenous people have long hair and live in teepees. Especially being a part of the fashion industry, Reyome finds cultural appropriation insulting as she constantly sees others wearing headdresses and traditional Native American accessories without understanding the significance and meaning behind the pieces. Reyome keeps her culture close to her heart, exemplified by the eagle feather and traditional garments she wears in the video. She shows her pride saying, “I wouldn’t have the story I have if I wasn’t Native American” (Daunette on What Being Native American Means to Her). 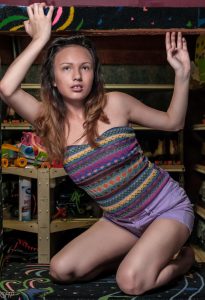 In an interview she did with Change Makers, Reyome ruminates on what happened after the Teen Vogue video came out and goes into further depth on some issues the Native American community faces in the United States everyday. Reyome goes into detail about how much she values the sacredness in her culture, especially certain traditions such as pow wows and peyote meetings. She describes the sacredness behind Native American headdresses as well, noting that each eagle feather on a headdress must be earned. She explains her frustration with people who don’t take the time to understand the honor it is to wear a headdress and wear something they in no way have earned. She equates the situation to if she were to wear a purple heart, a prestigious military decoration. Her own words best explain it: “A headdress is not supposed to be fashion; it’s our medallion” (“Daunnette Reyome”). 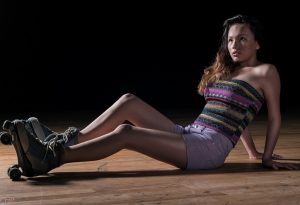 In the same interview, Reyome reflects on how her Teen Vogue video was received. She got an abundance of positive comments from people around the world, both indigenous and not. That feedback made her hopeful for the future, but other comments made her cautious. She received many offensive comments such as “Go back to your teepee,” making her slightly more apprehensive to continue moving forward. But with this interview and other similar articles, Reyome began obtaining the platform she needed to spread awareness. When asked about mental health issues on reservations such as depression, suicide rates, and addiction problems, Reyome gave an informative answer at only 13 years old. She explained that, in her opinion, Native Americans suffer from these issues because of the endless cycle between poverty, unemployment, and isolation from major cities. Because reservations are so far away from metropolis cities, transportation is necessary, but many households cannot afford a car. She prides herself on being so involved in her community, though. She believes she was born with a power that others don’t have because she was born Native American. She has a story and she is ready to share it with the world (“Daunnette Reyome”). 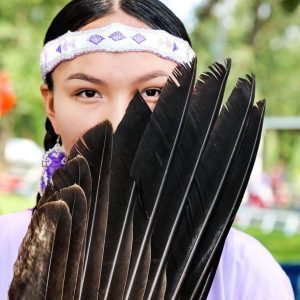 In 2017, Reyome spoke at the United Nations Headquarters in New York City at the Day in a Girl Summit. According to the transcript of her speech, provided by Indian Time, she explained her motivations to start modeling and her views on how our society needs to change in order to respect Native American culture. She reminisces on how she used to strut around her house when she was little in her mom’s high heels, and how she remembered never seeing a Native American girl in the fashion industry. Frustrated that she had no one to look up, Reyome became determined to be that role model for other Indigenous girls: “I believe it’s important for children to have a figure they can relate to and connect with that resembles who they are and where they come from” (Reyome). 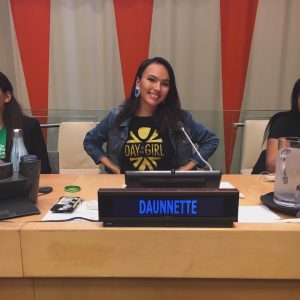 As Reyome and her friends were given the chance to vocalize their truth in a video series entitled #askaNativeAmericangirl, they received a lot of support along with backlash. Reyome mentions in her speech that a middle aged man even dedicated a seventeen minute video to criticizing her views. She took those hateful comments with grace, however, saying that those hateful words were just “an immature attempt to devalue everything we had to say.” She used the negativity to her power, using to to further her point that ignorance is an epidemic in America. Reyome discusses how she often hears people tell her move on and to not dwell on the past. To that she asks “how can we get over the past when those that tell us to get over it still show the same disdain towards us after all these years?” Reyome believes that for change to happen, the US government must start changing how we teach the history of our country in schools: “US History started with Native Americans so teach about us in entirety.” In addition, she encourages younger generations to educate the older generations. As a young person herself, Reyome has exemplified how powerful a youthful voice can be. Reyome doesn’t just ask for change, she demands her people to be heard, seen, and respected. “We are not just people of the past but people of the present and future” (Reyome).

“Daunnette Reyome on What Being Native American Means to Her.” Youtube, uploaded by Teen Vogue, 21 April 2016, https://www.youtube.com/watch?v=j-0WCV_d_CI