Just like moons and like suns, With the certainty of tides, Just like hopes springing high, Still I rise. HBD ? this Rez girl believes she’s a #phenomenalwoman because of you ? #mayaangelou @phenomenal.ly

The notorious Victoria’s Secret fashion show became an image of controversy in 2012. Karlie Kloss, who is a model for Victoria’s Secret, was walking on the runway wearing an indigenous inspired headdress. Included on the headdress were indigenous motifs such as feathers and turquoise jewelry. Since Victoria’s Secret originators nor are Karlie Kloss from indigenous descent, this headdress was misused and misrepresented an indigenous culture. Misuse of culture is considered cultural appropriation. After many outbursts from those who oppose, Victoria’s Secret had to apologize for misrepresenting, or appropriating, one’s culture (Willett) One fashion designer of Crow and Cheyenne descent, Bethany Yellowtail, is attempting to combat cultural appropriation and create clothing that is appreciated by all. Although Business Insider states that Yellowtail’s brand–b.yellowtail–is intending to “push back against the fashion industry that copies her culture,” she collaborates, designs, and sells culturally appropriate indigenous objects to create conversations and make solutions for native issues (Willet/Linn).

Bethany Yellowtail is no stranger to cultural appropriation. In 2014, the London based contemporary fashion brand, KTZ, recreated a dress using Yellowtail’s original geometric that contain a significant meaning to her Crow tribe. With KTZ being a non-native brand, Yellowtail on the surface level calls people to boycott the brand. Yellowtail, however, goes far beyond the surface level in this indigenous issue. Instead of being defensive of her specific geometric shapes being recreated for a different purpose/brand, she created her own culturally correct collection called “The Mighty Few” (Willet).

“I simply want to carve out space where an authentic voice and an authentic representation of Native America exists and thrives.”

This quotation is taken from Yellowtail after being asked how she felt about KTZ taking her design. She merely argues that she is tired of defending her culture and wants to take action to create new ideas surrounding indigenous cultures (Willet).

When being asked in a KCET, a news broadcasting center, interview how cultural appropriation affects her as a designer, she argues that

“we’re constantly having to defend ourselves, to justify our belonging”.

Yellowtail further iterates that her goal for b.yellowtail is not to be “centered around cultural appropriation,” but instead continue her passion of creating clothing that accurately represents her culture. Since Native American artists have to be defending themselves due to cultural appropriation constantly,  Yellowtail believes this limits an artist’s piece of work and eliminates the deeper meaning behind their pieces. She strives to stop defending her culture and urges people to look beyond the cultural appropriators when seeing the creativity in her brand. Yellowtail states that

In doing so, she is combatting cultural appropriation; however, her brand contains a more profound message of indigenous cultural appreciation by creating designs meaningful to her tribe and native community. According to KCET, Yellowtail explains the importance of geometric shapes to her Crow tribe. The most important of the geometric shapes is the tipi design which resembles an hourglass. She expresses that the hourglass represents the balance of spirituality and physicality, and at the center is where the Crow find their balance (Linn). Most of Yellowtail’s designs come from her youthful experiences of growing up in Montana on the Crow Nation and Northern Cheyenne reservation drawing back to her firsthand experiences of being a young indigenous woman.

This video represents what Bethany Yellowtail’s brand is about showing that it is more than just clothing, but a conversation starter about indigenous issues. Created and uploaded by b.Yellowtail.

Not only is b. Yellowtail representing Yellowtail tribe, but it is inclusive to several other indigenous artists and their tribes. During an interview with KCET, Yellowtail reveals that she opened her door to other native artists when a man approached her with a set of beaded earrings asking for $15. This man stated that her $15 would be going strictly towards gas money. His situation so emotionally moved her that she opened her business to different tribes and people (Linn). All people are encouraged to wear her collection and to understand the cultural significance of indigenous culture in a vibrate/trendy way (Willett). By doing so and buying her merchandise even if a person is non-native, the consumer is promoting cultural appreciation and support for indigenous issues. Bethany Yellowtail encourages people of all races, backgrounds, and spiritualities to join her movement in representing her culture in a beautiful positive way. Needless to say, b. Yellowtail is an all-inclusive brand creating multi-issue designs which encourages all people to make solutions and conversations.

This video is a series of youtube episodes showing the one year in the life of Bethany Yellowtail as she is producing a collection. The producer/director is Billy Luther. This is the first episode of a six-episode series.

One example of Bethany Yellowtail’s fashion that started a conversation about indigenous’ issues is the “Women Warrior” scarf. During the Women’s March in Washington D.C. in 2017, a group of indigenous women gathered in the “Indigenous Women Rise” movement and wore Yellowtail’s scarf. This scarf was created along with another indigenous artist to symbolize the power of women by using the Crow’s most powerful ceremony: “Shoshone War Bonnet Dance.”

“The two together gave me an overwhelming feeling… It was so beautiful to clearly see the continuity of our people.” (Willett)

This quotation is from Bethany Yellowtail after witnessing a “Shoshone War Bonnet Dance” firsthand and noticing how beautiful her culture is. This moment inspired her to begin designing this scarf (Willet).

There are so many powerful symbols in the scarf which represent important the Crow culture themes such as what the bonnet and dance symbolize. Women who dance in the “war bonnet” style have achieved the highest honor for a woman within their culture. The bonnet is worn during this sacred dance ceremony. The women in the scarf can be seen wearing the sacred bonnet in a circular style which represents the way indigenous people think of life: circular, not linear.  In addition to the significant symbols, the scarves color, turquoise, is symbolic of the native themes of friendship, unity, and peace. 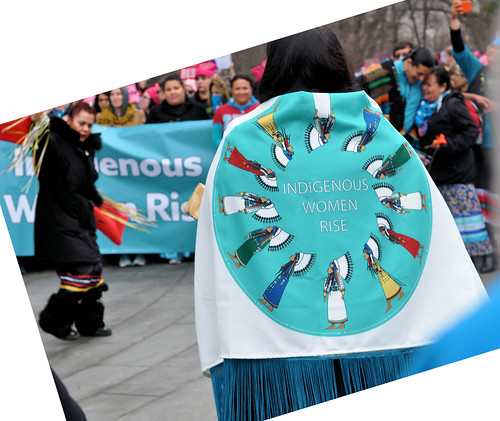 This picture represents the Women’s March “Women Warrior” scarf worn by women (and men) participating in the “Indigenous Women Rise” in 2017 in Washington D.C. The photo was taken by Edward Kimmel.

With all of these powerful symbols, the scarf accurately represents what the Women’s March is trying to portray: respect for/of the women and empowering women for better. Exhibiting this scarf during the Women’s March creates a conversation about how to treat indigenous women with this same empowering and respect.

Bethany Yellowtail is a 28-year-old Crow and Cheyenne woman who is representing her indigenous heritage, creating tough conversations, and coming to solutions through her active participation in the fashion industry.

Willett, Megan. “A Native American Designer Is Pushing Back against the Fashion Industry That Copies Her Culture.” Business Insider, Business Insider, 28 May 2015, www.businessinsider.com/native-american-designer-byellowtail-2015-5.

One Reply to “Looking Beyond the Geometric Shapes”