“I got my future back”

Tokata Iron Eyes, a 15-year-old environmental activist from the Standing Rock Sioux tribe has spent most of her adolescence fighting to protect her home. Iron Eyes grew up on the Standing Rock reservation, a region now known for the infamous grassroots protests over the governmental placement of the Dakota Access Pipeline. For Iron Eyes, protecting the environment is second nature. In an interview with Teen Vouge, Iron Eyes claims, “As an Indigenous people, I know no other way. My grandmother has taught me how to live off the earth.”

Growing up, Iron Eyes was taught the importance of her personal history, something that inspired her to lead the Standing Rock protests in later years. She cites learning about the initial plans for the pipeline in school, and immediately knowing she refused to be complacent in the destruction of the land her ancestors fought and died to protect (Iron Eyes).

Iron Eyes rose to prominence in the political movement after a video of several young children on her reservation went viral. The video, a part of the “Rezpect Our Water” campaign, shows the details of the Dakota Access Pipeline in text over pictures of the beautiful and serene reservation. A young girl sings a tribal song, as horrifying facts flash across the screen. According to this video, the proposed project would transport 570,000 barrels of crude oil over the Missouri River, which is located less than a mile from the Standing Rock Reservation, every single day. The video concludes with Iron Eyes’ call to action: “respect our water, respect our land, and respect our people,” she says. Iron Eyes goes on to detail how to join the fight against the implementation of the pipeline (Jean). This quotation by Iron Eyes stands out as particularly rhetorically effective. The use of anaphora in the repetition of the word “respect” invokes strong emotions in the viewers. By choosing the word “respect” to be repeated, Iron Eyes focused the video back onto the thesis of the movement. It is about respect for the environment, for the people of Standing Rock, and for the generations of Indigenous people that fought hard to protect the Earth.

The audience that this video reached was key to the protest’s success. By aiming it generically at the public, it turns a lens on the viewer, forcing them to either take action or feel uncomfortable in their complacency. If they had chosen to market the rhetoric toward a specific group, say, only indigenous people, the message would have been much easier to ignore. This video makes one thing clear: the youth at Standing Rock will no longer be silent, and neither should you. 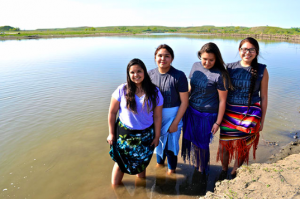 In the months following the video, the youth at Standing Rock, led in part by Iron Eyes, began a political crusade. The Standing Rock protests gained support from outside people and organizations and soon went viral. Iron Eyes was leading an entire movement in large part due to the popularity she gained from the video. A camp was built where protesters stayed. Groups would pray about the cause together, and ceremonies were often held. Millions of Americans across the country who weren’t there physically would “check in” to Standing Rock on social media to voice their support. Almost every aspect of this protest was organized by youth, and Iron Eyes played a large role in not only kickstarting the movement, but by inspiring passion in others to continue the momentum (Rosenmann).

Despite outside support, the Standing Rock movement still faced criticism by many, and was massively underrepresented in the media. The news outlets that did report on the protests focused on pushing a one-dimensional narrative about life in Standing Rock (Ahtone). BBC news wrote that life on such a reservation was “marked by a combination of crushing poverty and chronic alcoholism”. This idea was pushed through the minds of the public, making the movement seem illegitimate, forlorn, and unimportant.

In spite of the negativity chronicled by the mainstream media, Iron Eyes’ speeches to the protesters helped to show that poverty is not the defining characteristic of the movement. By employing a young perspective, the movement’s narrative was eventually shifted back to how it was when they created the video: a narrative of hope. The youth at Standing Rock led by Iron Eyes created pivotal turning point in the way the public perceived Native Americans. The story shifted from one of despair to one of power, and the Indigenous community gained more control over the way that story was told.

“I’m standing here for all the Indigenous people who couldn’t be here today. This is my purpose, this should be all of our purposes – to protect our Mother Earth.”

After months of protesting, Iron Eyes and the rest of the Standing Rock youth were finally granted justice; their demands were met. The U.S. Army Corps of Engineers eventually stated that they were no longer allowing the pipeline to be worked on in this region. After this announcement was made, Iron Eyes gave one last speech to the protesters set up in the camp. “I’m standing here for all the Indigenous people who couldn’t be here today. This is my purpose, this should be all of our purposes — to protect our Mother Earth.” Tearfully, she explains in a video that was later posted to Facebook, “I feel like I got my future back” (Rosenmann). However, this does not mean that Iron Eyes’ fight is over. Despite the announcement from the government, President Trump has pushed for further development on the land (Javier). We can be rest assured, however, that wherever the Dakota Access Pipeline reappears, so will the Standing Rock youth to work against further environmental damage.

Since her involvement in leading the protest, Iron Eyes has continued to fight for land and water protection, including speaking at the 2016 Climate March and collaborating with celebrities and other Native protesters (Doerer). Iron Eyes has spent her childhood fighting against not only environmental damages inflicted upon her people, but the stereotypes attached to her reservation. Her activism has inspired many Indigenous youth to join the fight and do the same. Her work will continue to impact and inspire for generations to come. 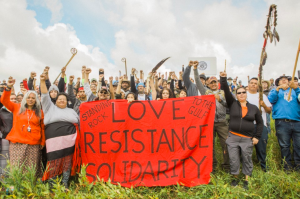 Javier, Carla. “A Timeline of the Year of Resistance at Standing Rock.” Splinter, Splinternews.com, 14 Nov. 2017, www.splinternews.com/a-timeline-of-the-year-of-resistance-at-standing-rock-1794269727.

Rosenmann, Alexandra. “’I Got My Future Back’: One of the Young Leaders of the Standing Rock Movement Sheds Tears of Joy.” Alternet, 5 Dec. 2016, www.alternet.org/activism/i-got-my-future-back-13-year-old-behind-standing-rock-movement-sheds-tears-joy-over.