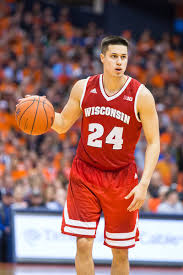 In America, dating back to the 1900s, sports have always been an important cultural facet of our society. This point is proven nn a recent study done by Reuters, stating that that states ion-in-2012-idUSN1738075220080618″>“The entire global [sports] market was $141 billion. The U.S. alone accounted for almost half of that.” With the large market and influence that American sports posses, athletes throughout American history, from Jackie Robinson to Muhammad Ali, have called upon the foundational American principles of liberty and freedom to bring to the forefront of public discussion poignant issues that plague under privileged and underrepresented communities.

However in today’s charged political climate, current President Donald Trump has put-forth the “stick to sports” narrative, originally a term coined by conservatives who viewed sports as a societal safe space, where real life political situations and qualms are put aside or ignored. With the silencing of Colin Kaepernick and the degradation of professional athletes such as Lebron James on a national scale because of their political activism, this narrative is once again gaining strength in American culture.

However one athlete who in the face of those, is using sports as a platform is Bronson Koenig, a former collegiate basketball player at The University of Wisconsin. A member of the Ho-Chunk Nation, Koenig is one of 40, Native American collegiate basketball players and is using the national relevance he has gained through sports to bring issues facing the Native American community to light.

Koenig, originally from La Crosse, Wisconsin, is currently a professional basketball player in the Montenegrin first division, but he became a household name across America while leading the University of Wisconsin’s men’s basketball team on two thrilling final four runs in the NCAA tournament. Throughout his college career, Koenig endeared himself to the nation with his underdog mentality and feisty spirit. He burst onto the national scene during his sophomore year, but truly rose to prominence throughout the 2016 NCAA tournament as a junior, culminating in his improbable and heroic step back three pointer to upset second ranked Xavier, advancing Wisconsin to the Sweet 16.

With Koenig’s heroics on the national stage being widely publicized, he began seizing the opportunity to use this newfound fame to advocate for Native American communities across the nation.

One main issue that Koenig has been brought to the forefront of public discussion is the degradation of Native Americans that comes with stereotypical sports mascots and insensitive team names that are found across the country. In an interview with Sports Illustrated, a nationally recognized sports magazine, he emphatically spoke out against these mascots and slurs, stating that, “when a Native American kid sees that growing up and sees the disrespect, it lowers their self-esteem and puts them in a lower place in society,” He continued, “It’s honoring them? It’s not racist? How are you going to say that when you’re not a Native American?” Koenig went on to specify that the “term comes from when we were skinned and our flesh was red,” adding that he doesn’t “see how that is honoring us in anyway.” Koenig’s nationally published interview with Sports Illustrated came in response to a series of policy decisions by Wisconsin Governor Scott Walker, who has consistently made it more difficult for high schools and colleges in Wisconsin to shift away from degrading teams names and Mascots. “In 2013, Walker signed a bill that makes it harder for public schools to change racist mascots and names. The law, which he claimed to support to defend the First Amendment, requires 10 percent of a district’s students to sign a petition within a 120-day period to earn a hearing regarding changing a mascot name.” While the state Government of Wisconsin is adamantly opposed to Koenigs view, his message is being supported and promoted by the population at large. Said Susan Schmitz, a University of Wisconsin alum and resident of Madison, “I am very proud that the team has players like Bronson, who is willing to take a stand against racist mascots. This is especially important as our governor has continued to attack American Indians and all working people in the state.”

More important however, than Koenigs outspokenness regarding plights faced by the Native American community is Koenig’s place as a role model, particularly for native youth. This was exemplified in the fall of 2016, when Koenig made the trip to Standing Rock to support the Sioux Tribe and their fight against the Dakota Access Pipeline. This pipeline not only will pollute vital water supplies that are crucial for the native Sioux Tribes sustenance, but will disturb ancient Native American burial grounds.The morning after he arrived, Koenig began exploring the camp and found kids playing basketball with a makeshift hoop on a dirt hill. As Koenig began playing and talking with the kids, word spread of his presence and soon over 50 kids were playing on a dirt hoop. 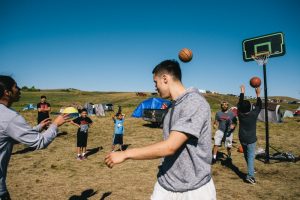 Koenig went on to host a series of basketball camps for native american youth at the sight. He also hosted a clinic at a local predominantly native american high school that filled out the gym. 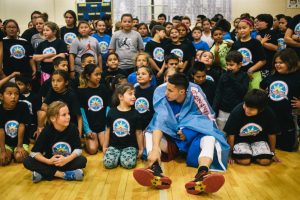 While speaking with the attendees of the clinic, he was asked if he had any Native American role models growing up. “The question stopped him in his tracks.” After a long pause he responded, “No, I didn’t grow up with any Native American role models. It’s not that they didn’t exist, but just that they weren’t on my radar. They weren’t celebrated in popular culture.” And that is what he believes is the true impact of his activism, “that if I could be someone who even one kid from Standing Rock looked up to, I’d be prouder of that than of anything I had ever done — or might ever do — on the basketball court. Looking out at the kids, I was proud that they were seeing someone succeeding who looked a little like they did.” As stated eloquently by NBC Sports contributor Rob Dauster, “the work Koenig is doing promoting the causes is invaluable, but it’s not as important as the self-confidence he gives Native American children around the country, the belief that they can make it out, they can be successful in life, they can put themselves into a position where they can give back to a community the same way that Koenig has.”

As one of, if not the most nationally recognized Native American in american sports, Koenig recognizes his responsibility to advocate on behalf of his kin and has forged his own path to show the oppression that Native Americans face daily in American society.

“What I Found in Standing Rock | By Bronson Koenig.” The Players’ Tribune, 1 Dec. 2016, www.theplayerstribune.com/en-us/articles/bronson-koenig-wisconsin-basketball-standing-rock.