Can you describe yourself in just 150 characters? This is all that is allowed for an Instagram bio to show your followers who you are and why they should follow you. Tunchai Redvers describes herself as a “social justice warrior”; these three words perfectly encapsulate her spirit and meaning. Most people would associate the word warrior with violence and aggression, but Redvers flips the idea of this concept and makes it peaceful. She uses the notion of warrior-hood as a medium for spreading positivity, hope, and self-love.

Tunchai Redvers is a modern and inspiring 25-year-old activist for Indigenous communities. In her bio, she also tells followers her Indigenous affiliation is Dene and Métis, and she identifies as queer/two-spirit (@denewanderer Instagram). Redvers is constantly taking action to empower Indigenous youth and give them hope, which is important because everyone should feel valuable and confident.

Tunchai grew up in the Treaty Eight Northwest Territories in Canada. She belongs to Deninu K’ue First Nation. Tunchai and her brother, Kelvin Redvers have risen to become leaders pushing for change for Indigenous citizens. Tunchai earned her degree at the University of Guelph, and she has had massive success since then. She has earned the title of one of the Top Ten Drivers for Change in Canada by MTV and We Day. She also received the Lawson Foundation’s Emerging Leaders Award, and all before she turned twenty- three (We Matter). 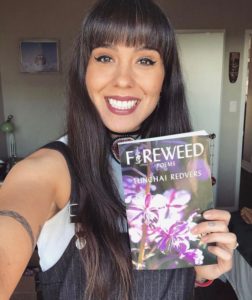 Tunchai released a book of short poems and prose titled Fireweedthat released over the summer of 2019. Fireweed is a pink-purple colored plant that spreads rapidly in areas that have a lot of wildfires. Redvers explains that fireweed growing is a signal for other plants to start to grow. This natural observance of fireweed parallels with Redvers’ interpretation of fireweed being “the healing cycle of the natural world” (Cohen). Additionally, fireweed can represent Redvers because just like her, fireweed is native to the Northwest of Canada.

Redvers uses the hashtag #Indigenouslit on her Instagram posts to describe the type of writing in her book. She writes to inspire all young women, but most specifically women who are Indigenous. She continues to be a social justice warrior even in her writing, where all her topics are geared to making positive impacts on her readers’ lives. This book is a form of self- expression that Redvers uses to project her ideas about healing, hope, and empowerment. She expresses herself throughcaptivating poems that are pieces of art. The short poem pictured below can be found in the Fireweed book, and it is a great representation of just one of Redvers’ several inspiring messages. 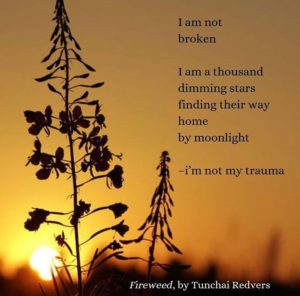 It can clearly be seen that Redvers uses literary devices to enhance her writing by comparing herself to stars. This displays the motif of natural world elements being used throughout the collection of poems, just like the title of the book demonstrates. While it may be interpreted many ways, Redvers conveys the idea that life is not hopeless.Even if you feel “broken”, helpless, or down, there will always be someone or something that can bring you back up and heal you. The “thousand dimming stars” represents the darkness and hurt that one may feel inside, while the moonlight is representing the light and positivity. The moonlight will help them out of their dark situation and bring them into a better and brighter place. The poem sends the message that past experiences that may have been negative do not have to define their life forever. Redvers fights to spread hope among as many people, both Indigenous and non-Indigenous, as she can possibly reach. 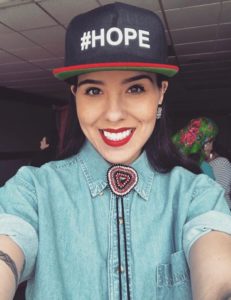 Redvers with her We Matter merchandise hope hat. (@denewanderer Instagram)

Hope is a huge factor in another one of her actions to be a warrior for Indigenous communities. The organization We Matter is a suicide prevention platform to inform and support Indigenous youth who feel like their lives aren’t important. People in similar situations send in videos of inspiration, and they can also post other media forms like artwork and writing. People everywhere are encouraged to sign up and take the hope pact on the We Matter website. This pact is a form of unity, and its goal is to remind youth that everyone goes through rough times, and they are not alone in their struggles (Ponciano).

In a YouTube video posted to the We Matter Campaign site, Tunchai tells her own story and gives words of advice. She says, “I was eleven years old when I started having suicidal thoughts. And for many years, I had suicidal thoughts. I was bullied really badly, I’ve been in abusive relationships, I’ve been emotionally and verbally abused, I’ve experienced trauma. I have trauma in my family. I have addiction in my family. When I was fifteen, I took a lot of pills and ended up in the hospital… In taking those pills I didn’t want to die. I just wanted to stop hurting” (YouTube).  She goes on to say that all she needed to do was reach out to someone about how she was feeling, which could persuade people having suicide thoughts watching this video to reach out and save themselves. The video appeals to other Indigenous youth because they can see that many Indigenous people deal with the trauma they are experiencing. Tunchai sharing her own experiences is impactful on viewers struggling with similar issues because they see that Tunchai was able to find light and positivity, and they can too. Even though it will be a difficult journey, it is a better option than taking their own life. The first-person narrative video is effective in Tunchai expressing her message because viewers can see her vulnerability. The video is better than writing her story because people are able to see her emotion and feel a personal connection.

For a person as optimistic and devoted to spreading positivity to others as Redvers is, it is hard to imagine that she was once so distressed. Along with the personal trauma she was dealing with, Tunchai struggled with her Indigenous identity. In an Instagram caption, Tunchai passionately writes, “As an Indigenous girl growing up, I never saw myself represented on tv, in movies, in the magazines… If I did, it was in negative news stories or very stereotypical portrayals. I struggled with my identity and ideas of worth and beauty” (Instagram @denewanderer).  Redvers’ words show how much of a heavy impact that these media portrayals really do have on Indigenous youth. 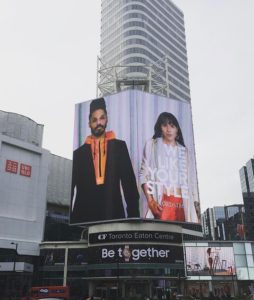 Even though Redvers used to struggle with her identity and beauty, she is now able to proudly show everyone who she is. A huge billboard in downtown Toronto is proof of this feat. Redvers exudes confidence in these statement shots of her modeling for Nordstrom. This campaign was, “meant to promote diversity and inclusiveness” (Cohen). A world-wide company as big as Nordstrom breaking barriers on Indigenous people being represented in the media is taking a huge step in the right direction, and Tunchai is at the forefront of the movement. Redvers is a warrior in her own right, as she is valiant and courageous in all her work to spread good vibes amongst Indigenous communities. Hopefully Indigenous youth won’t feel the way that Redvers used to as a child now that they have such a strong, positive, self-accepting role model – a true social justice warrior through and through.