Hong Kong is one of the most important financial centers in the world. Its complicated history, unique way of governance, and high degree of economic freedom altogether contribute to its singularity and affect the use of language in this city. In Hong Kong, its two official languages—Cantonese and English—are most frequently used. No matter where you go, there are always signs written in traditional Chinese and English, denoting its status of being bilingualism. In daily life, people communicate in Cantonese and English interchangeably, depending on different social contexts and environments. Thus, the mixed use of these two languages has shaped a unique linguistic landscape in Hong Kong and serves as a communicative force for Hong Kong community.

In Hong Kong,  traditional Chinese and English are written on every public sign, such as street signs, subway station’s names, airport signs, signs on businesses etc., with Chinese usually appears to be more prominent than English. For example, Figure 1 below shows a typical sign of the subway station—traditional Chinese characters are above the English letters and appear with larger font size. Besides the use in public sectors, bilingual signs are also displayed in some private sectors, such as privately-owned companies, commercial buildings and shopping centers, of which the potential clientele might be English speakers. For example, the directory of the commercial building where I go to work is presented in both Cantonese and English, as shown in Figure 2, which is convenient for English-speaking employees 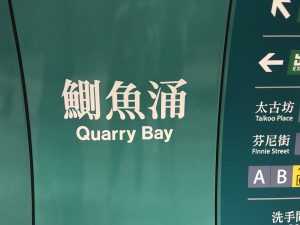 and clients. Therefore, in Hong Kong, it is easy to tell that both Chinese and English languages have been inscribed in this landscape, and they exist as guidance for both Hong Kong residents and foreign visitors. 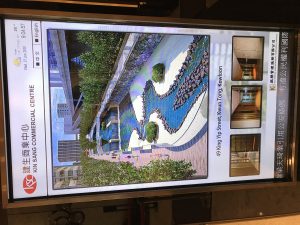 Even though both English and traditional Chinese are used in written form, the choice of language in interpersonal communication depends on the social context. For example, in daily life, local Hong Kong people still tend to communicate in Cantonese, no matter to families, to peers or to co-workers. However, in a professional business setting, many people would switch to English speaking mode and use English to give presentations or to write proposals and reports. Besides social context, the frequency of English use is also closely related to the physical location, as English is used more frequently in financially developed areas. For example, in the area where my company is located—Kwun Tang, most conversations that I heard on the way to work are in Cantonese. However, if I travel to Central and Tsim Sha Tsui, the more central and prosperous areas in Hong Kong, I’m usually more exposed to English conversations in the subway or on the street.

In Hong Kong, such linguistic landscape is mainly communicative driven, since bilingualism has both historical and present origins. It emerged in the late twentieth century, the era when Hong Kong became a British colony and was imposed to use English as the sole official language. However, despite of the change of sovereignty and regain of independence in 1997, the establishment of English education and English speaking environment in Hong Kong is still retained. Nowadays, English is being taught in school and used in a professional setting, and it becomes an inseparable part of Hong Kong life. What’s more, with a deluge of financial opportunities, Hong Kong has attracted so many foreign investments to build capital here; and English ended up being an important tool of communication. Given such historical and cosmopolitan reasons, people are gradually adaptive to English and could use it more comfortably, along with Cantonese, for school education, business negotiation and other communicative purposes. The use of English in Hong Kong is to serve ideational consideration more than to “aesthetic” or “symbolic function”, and these terms are defined by Leeman’s article (Leeman and Modan, P336).

All in all, language could be used to serve many different purposes, such as for “commodification” use or “to give a sense of authenticity” (P335). However, in Hong Kong, I feel its linguistic landscape mainly serves as a communicative force; since no matter where you go, English is used as a tool to truly provide convenience to English speakers, instead of being used for superficial purposes, such as a sign of modernism.