While many countries around the world have official languages, the United States is not one of them. This can be surprising since all official documents are in English, the language taught and spoken in public schools is English, and it is the most commonly spoken language. Because of this, it makes sense that most, if not all, signs are in English and English only. Boston is no exception. One of America’s oldest and most international cities, Boston could be expected to cater to nonnative speakers by adding signs in foreign language. So why don’t they? Well there are many possible answers to that question, including finances, necessity, and which language to select.

If there is one thing a city always needs, its money. Those familiar with Boston have most likely heard of “the big dig” otherwise known as a construction project to put certain roads underground. This project without a doubt put the city into major debt meaning that the next projects to be funded need to be top priorities. Adding signs in another language, for better or worse, is not a top priority. Through exploration of the city on foot, one can learn so much through visuals alone. In the city of Boston alone there have to be millions of signs, therefore, the cost of making a million new signs is almost beyond measure. Seeing the millions of signs provides an explanation for the lack of change and a start at understanding the economic and cultural situation of the environment.

The lack of signs in foreign languages can probably answer the question of whether or not people think these hypothetical signs are necessary. If there was a serious high demand, at least a few signs would have been produced as a test run. The airport would be a logical location for these test signs as it is a high traffic, international location. Even so, there are no signs in a language other than English. This doesn’t mean nonnative English speakers would not benefit from signs in a language other than English. American culture often dictates that everyone speak English, meaning that the necessity of foreign language signs is reduced because people coming here are expected to know at least enough English to get by.

With thousands of languages being spoken throughout the world how does a city decided which to put on signs? Looking at the most common spoken second language is a good start, but ultimately the speakers of the languages not selected could become upset as they feel their language should have been selected. The native English speakers also have a “vested interest in maintaining their own-group language on public signs” as they could feel as if their community is changing or the lack of necessity for the foreign language sign change (Landry & Bourhis 1997).

These feelings can have historical stems as well. Boston’s North End is a predominately Italian neighborhood filled with Italian businesses and even an Italian church. Of all locations, this would seem to be a logical one in which to add Italian to signs, but this has not occurred. The question as to why can be rooted back to the early Italian immigrants who came not only to Boston, but to America. There is no doubt that they spoke Italian and possibly also filled their neighborhood with Italian signs, so why are there no Italian signs today? One can theorize that assimilation played a part as these new Americans desired to create a new life and fit into American culture. Putting this history in context can help to explain why in a multilingual city, all the signs are in English.

When it comes to the discussion about adding signs in a foreign language, for those in government, it is easier to do nothing on the topic than it is to do something. The trouble of financial costs, overall lack of necessity, and sensitive topic of which language to select discourages action. The signs throughout Boston reflect this and most likely always will. 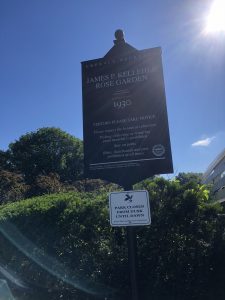 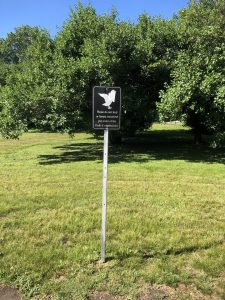