From the Starbucks menu to the “No Durian” signs in the metro, Singapore’s rich identity with its diverse population has evidently influenced the sociocultural use of language. Never had I imagined myself referencing a Starbucks menu as a tool for cultural anthropology, but Singapore has exceeded my expectations with its unique offerings, even at the local franchise of such a global corporation. Inspired by the finest Chinese tea flavors, Malay desserts, and Indian spices, the menu successfully mirrors the linguistic landscape of Singapore as a city, which I find too complex to be examined and understood as one whole piece. Singapore’s multifaceted linguistic landscape calls for an array of languages and mediums of communication among its people. Therefore, I have found the use of language in Singapore to be a personal statement of identity, which is adapted depending on the user’s relation and identification with Singapore as well as the discourse in which the language is being used, whether it be for public, commercial, or sociocultural purposes.

The linguistic landscape in Singaporean public spaces differs from that in each of Singapore’s cultural neighborhoods, where “culture is used both to frame public space and to legitimate the appropriation of that space by private and commercial interests.” (Leeman). Within an hour, you can travel from Little India to Chinatown then Arab Street and end at Marina Bay, having experienced completely different linguistic landscapes accompanied by different scents, menus, architectural symbols, and energies. While in publicly owned spaces, like the subway station, all signs are written in English, Mandarin Chinese, Malay, and Tamil, on signs for private spaces, you find only Tamil and English in Little India, Mandarin and English in Chinatown, and Arabic and English on Arab Street. In this context, “the symbolic functions of language help to shape geographical spaces into social spaces.” (Leeman) Although I have only been here for a month, it was easy noticing how these neighborhoods tend to be mostly occupied by individuals who identify with the respective culture that the neighborhood almost commercializes, as well as tourists. Not only do signs differ but the advertisements in the station at Little India and that of Chinatown are also different, each catered to the majority of visitors and inhabitants in these areas.

Despite the government’s attempts to reinforce the use of the main four languages spoken in Singapore: Tamil, Mandarin Chinese, Standard English, and Malay, the “globalization of English [impacting] many linguistic landscapes”, has reached Singapore, where the controversial Singlish was born and remains alive today. While Singlish is viewed by some as a unique and unifying form of communication among the locals, others find it unprofessional due to its disregard of many syntax and grammar rules of the standard English. An example of a Singlish term is “can lah” meaning “yes”.

Singlish has created a controversy on the internet, especially when in March 2017, grammatical mistakes were made on educational signs in a mall. In response to this, the chairman of the “Speak Good English Movement (SGEM), which is managed by a steering committee comprising key academics and professionals in Singapore […] said the mistakes were the result of ‘ignorance’ and ‘carelessness’.” (YK) On the other hand, Dr. Ng E-Ching, a lecturer at the National University of Singapore’s English department says that “If people are going to be proud of being Singaporean, they’re also going to want to sound Singaporean. The prestige of Singlish will rise or fall with the prestige of being an ordinary Singaporean.” (Sin) While these two arguments each carry their own weight, I have found from my interaction with Singaporean locals at work, in shops, and at markets that the beauty of the Singaporean identity lies in its fluidity, allowing each resident the autonomy to create and live their own definition of their national identity and the articulation of that identity through adaptive linguistic use depending on the discourse in which it takes place, as long as they follow the laws and respect others. 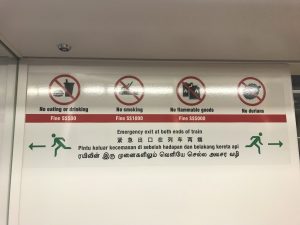 Image 1: A public sign of the prohibited items inside the subway (MRT) that articulates Malay, English, Tamil, and Mandarin Chinese. 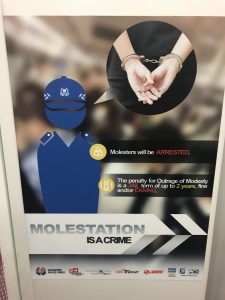 Image 2: A sign on the MRT that is only written in English. An example of how loudly stated laws and fines are in Singapore, which could influence the low crime rate. 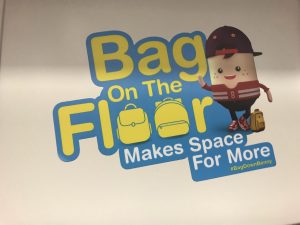 Image 3: A sign on the MRT encouraging passengers to be aware of other’s need of room. An example of how government funded and published signs use cartoon figures instead of real humans to generalize the message to all their residents, instead of using racially sensitive figures that could be misinterpreted.