San Francisco, famous for its technology advancement and innovation, has also been known as one of the most culturally diverse cosmopolitan city in North America. Rapidly expanded after the California Gold Rush, the city has left a variety of cultural heritage and linguistic landscapes. One of the most important legacy is the well-known San Francisco Chinatown, which is the oldest and largest Chinatown in North America. Through my experience in this past few weeks, a Chinatown is not always truly indicative of an authentic Chinese culture due to the influence of other linguistic landscapes.

As an international student from mainland China, I find it difficult to relate myself to the Chinese American in San Francisco Chinatown. The main differences come from cuisine and language. When I first came to Chinatown, I thought I get to taste the “real” Chinese dishes I have been craving for. After I have stayed in San Francisco for three weeks, however, I am upset to conclude that hardly any Chinese food in Chinatown are authentic and savory. I even find out a correlation that the older the Chinese restaurant is, the worse it tastes. The main reason I suppose is that the restaurants in Chinatown try to target Chinese and American customers at the same time. Yet, many fail to realize it is difficult to accomplish because the two groups of people have polarized tastes. This can be demonstrated by the fact that many authentic Chinese restaurants in San Francisco I find generally have very low ratings on Yelp.

Although the official language in San Francisco is English, the Chinese American in Chinatown often use Cantonese to communicate. Surprisingly, there are still some Chinese American who can speak only a few common phrases or cannot speak English at all. In the same time, Chinatown is a major tourist attraction. Every time I pass by Chinatown, I see tourists visiting and taking photos. As Leeman said, “the ratio of languages is indicative of the relative power of various ethnolinguistic groups” (334). Therefore, it is not surprising to see many street signs and banners are written both in English and Cantonese, suggesting the two dominant groups in Chinatown are Chinese and other racial visitors. 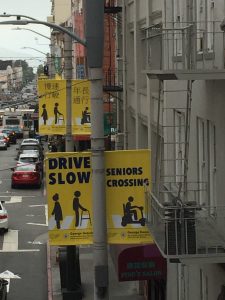 Similar to the banner and signage, I have seen another example of two languages put together. This picture, which depicts the Wells Fargo bank at San Francisco Chinatown, supports Leeman’s statement: “instances of written language in the landscape … are also productive signs: they have productive economic and social consequences…” (332). Unlike the other Wells Fargo banks, this branch prints its Chinese name alongside the English name. With the creation of a Chinese name, the bank helps itself to create a more down-to-earth image. In other words, the bank can be better fit into the local community after a Chinese name was attached, thereby attracting more Chinese customers and agreeing with Leeman’s claim that “consumption becomes culture, and culture becomes consumption” (338). 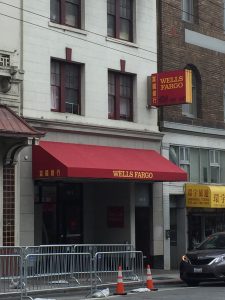 Overall, I found myself contradictory to the Chinese culture in Chinatown. The Chinese American in San Francisco Chinatown have developed their own set of values and customs, which is an amalgamation of western and eastern culture.