Dublin, Ireland is the capital of a country that has been caught up in religious and political turmoil for much of its existence: fighting with England for its independence, fighting to keep Northern Ireland, fighting to determine its official identity, its official language and religion. At one point, this fight ripped the country in two – old, traditional, western Ireland and new, modern Ireland.  Western Ireland hosted villages known as Gaeltachts, or places where Irish is still predominantly used and spoken. Towns like this got their own special name because they were so rare. After the economic boom in the 90’s however, there was a push to reunite both sides of the Irish culture.  School children learned basic Irish in class, tourism advertisements began to include the charms of the old Irish ways, some families even sent their children to Irish classes in Gaeltachts over the summer. Even with all this, the most evident way this can be seen in the city is through the use of language on the Dublin streets.

Walk down any street in Dublin and you’ll see the same thing: signs with both Irish and English on them. You may notice one common thing about all the signs other than the language though, they are all street or PSA signs. Every street sign, every sign indicating parking time, every sign asking people to clean up their dog’s poop off the side of the street, every sign placed there by the government (local or national) is both in Irish and English. The Irish, usually placed above the English in smaller, italicized letters, appears to be largely symbolic. It’s a gesture meant to bridge the old and new Irelands together. This idea is further evidenced by the lack of visual Irish anywhere else in the city. All the shops are in English, flyers and advertisements are in English; English is used for business, for commerce, for personal and private affairs.  Despite the fact that most Irish citizens now have a basic grasp of Irish, English is the dominant language in the city, no contest. 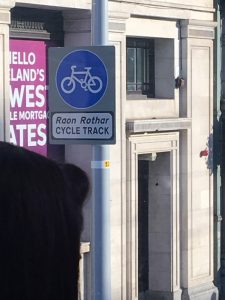 This inclusion of Irish in Dublin appears to be a passive, top-down regulation. That being said, there are many other active uses of language throughout the city, all found in the aural landscape of the people. Dublin is clearly an international city: walk down the street, take a bus ride, sit in a restaurant long enough – you will eventually hear a language that is not your own. French and Spanish are popular languages amongst tourists here, pointing to the unique advantage members of the European Union have when it comes to travel access. Thanks to the size of the countries and their shared, or at least close, borders, European citizens often take weekend trips to different countries, bringing their own native languages with them.

This unique aspect of the larger European culture extends to another landscape not often discussed – the digital one. While on the streets the inclusion of another language may appear passive and even obligatory, on the internet language is alive and often changing. Websites from different countries often offer translation services – usually provided by Google – but more often than not, the website will offer their own translated version in five or six different languages. This speaks to the fluid nature of language in an area so easily accessed by many different cultures, and Dublin is no exception to this dynamic integration. 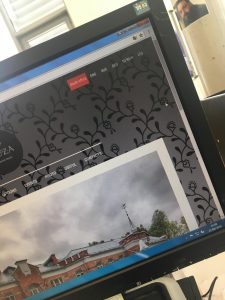 Overall, while English may be the more common tongue found in Dublin, Ireland stays true to itself be including Irish on street and service signs – even if its just as a gesture. While Irish is rarely heard spoken on the streets of the capital city, many other languages are represented. While Irish may have become less of a tool for communication and more of a symbolic bridge connecting the traditional Gaelic culture to the modern European one, the spoken and digital Dublin linguistic landscape is still just as vibrant and dynamic as ever.