In Boston, most signs are in English. I think this is because almost all residents, even though they are not from English speaking countries, can understand and communicate in English. English has always been as the “world language” where people from different countries could use to communicate. But Boston supports multilingual communities where I also see signs written and languages spoken in non-English. In my opinion, the purpose of multilingual is mainly to promote “symbolic economy”, which Zukin defines as “the intertwining of cultural symbols and entrepreneurial capital” (Leeman and Modan 337), and to gain commercial and economical development.

The public sign below is a very common one in Boston, which is always on a street lamp and informs people when and how to cross the streets. This sign targets all people in Boston whether they are locals or foreigners with simple written English so that every one could understand it and follow the rules. 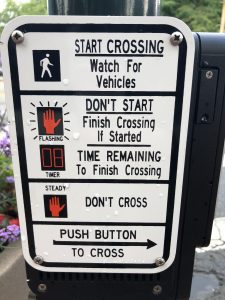 Boston is a diverse city where some people from Eastern countries live in, especially from China. In Chinatown, most signs are in Chinese and English. Just as the reading mentions in Washington DC’s Chinatown, “material manifestations of Chinese language are an important tool in the symbolic economy” (338), and “use Chinese-language signs as design features targeted towards people who neither read nor have ethics ties to China” (332). I obverse that while the majority of people coming to Chinatown are Chinese, there are also people from Korea, Thailand, Japan, and some other countries. Using Chinese language as an advertisement helps open up the market and enlarges the target group as people from other culture backgrounds could also feel the inclusiveness of their own culture into the American culture.

The Chinese sign in Boston Chinatown presented below is a good example illustrating this idea. The sign in Chinese says “Boston Chinese Commercial Association welcomes you”. The article also mentions the “commercial nature of material manifestations of language” (333). Signs in Chinese can be interpreted as a business strategy because there are a lot of Chinese in Boston who love to go to Chinese shops, restaurants, and bakeries. Using signs in Chinese languages let Chinese feel home and welcome, which makes them tend to buy more things and spend more money as they are pleased to feel the inclusiveness into a foreign country and become less homesick. This successful business move promotes commercial development, especially food and services industries, which then leads to generate more revenue for the city and sustains long-term growth of the economy.

Below is a sign on bus 59, which has both English and Spanish. I learn from my colleagues that some South American come to the United States to develop business or immigrant here to find better opportunities and jobs. “Instances of written language in the landscape have important economic and social consequences, and can affect those who visit, work, or live in a given neighborhood” (332). Since both Spanish and English are the top three widely used language in the world, public signs in these languages cover many people from the global and thus attract them to visit, work, or live in Boston. Attracting people from diverse backgrounds helps bring new perspectives and opportunities to Boston, which could potentially diversity current industries and improve economic growth. Therefore, the feature that public signs support multilingual communities is really a great way to have sustainable development in Boston. 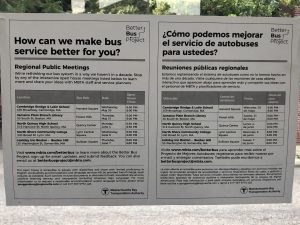 Even though most signs in Boston are in English with some in other few languages, I could here a lot of different languages on the streets, which include Portuguese, Spanish, Chinese and French. People from North America speak Portuguese and Spanish a lot. The company I am interning at share the same co-working space with a Brazilian company, where I hear its employees speak Portuguese all the time. The multilingual and multicultural features make Boson a very energetic city which it takes in new incomers and travelers every day as well as residents the locals. The symbolic use of languages attracts so many people from various backgrounds and builds inclusiveness of different culture groups, which also has strong commercial and economical implications.