A global power city, New York City has the reputation of being the cultural, financial and media capital of the world, and the city that never sleeps exerts a significant influence on the international stage.  Being such a global city, it is not surprising that the linguistic landscape of the city is very diverse and inclusive of the many cultures that are represented its members. Similar to other global cities in the world, but perhaps more so, the population of New York City is not only comprised of residents with different cultural backgrounds but also includes tourists and others passing through the city. The amenities throughout the city reflect the same; while they provide an ease of access to members of various cultural backgrounds, they simultaneously attract and target the tourists, thus illustrating the concept of “symbolic economies” (Leeman and Modan 337). While the main language spoken or used in New York City could be identified as English, from my personal observations, it is rather difficult to say.

At a place like Times Square (pictured below), which is a widely-known tourist attraction, it is more common to hear any language other than English being spoken. However, the billboards advertising various services are mostly all done in English except for one at the top, which is written in Chinese characters. Even within a global city, there is strategic planning involved- in a place sought out by tourists who are seeking the “American” experience, there are an appeal and commodification of the American culture: “As cities and themed environments become sites of ‘shopertainment’, consumption becomes culture, and culture becomes consumption” (Leeman and Modan 338). Though in this day and age there is a movement that encourages the identification and inclusion of other cultures to support the concept of multiculturalism, as globalization continuously progresses, even the American culture is commodified in America to attract and satisfy members of other cultures who crave the “American” experience as it is portrayed and romanticized in the media. 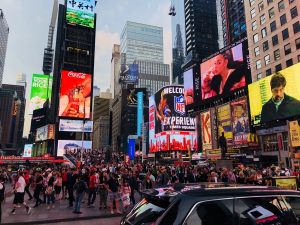 While a place like Times Square appeals the American culture to enhance the American culture, specifically that of New York, that is sought out by the hundreds of individuals to visit, likewise, there are certain districts that appeal and commodify their culture to attract members of the same. The existence of these neighborhoods demonstrate the bidirectional effects of blurring the boundaries between culture and consumption as mentioned in the reading: “not only do non-commodities enhance commodities, but cultural symbols also become part of the marketplace” (Leeman and Modan 338). Chinatown in the lower Manhattan area is one of the many cultural neighborhoods that exist in New York City such as Little Italy, Koreatown, etc. In a place such as Chinatown, while the commodification of the Chinese culture is apparent, with an emphasis on Chinese cuisine, the employment of the Chinese language limits the audience to the members of the same cultural background. 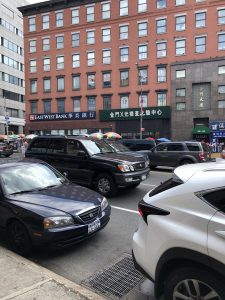 Observing from the picture above taken at Chinatown, the sign for “East West Bank” is written in English, but as for the other signs and characters posted on windows, a typical tourist passing through Chinatown for a meal would probably not understand. This idea of a limited audience, inclusive of only other members of defined cultural group is a characteristic of landscape as a way to construct identity: “Landscape is thus an important ingredient in constructing consent and identity- in organizing a receptive audience- for the projects and desires of powerful social interests” (Leeman and Modan 337). While the use of language in a specific space can be used to commodify the culture, at the same time, the use of language between members of the same group contributes to constructing a unique identity in the midst of the presence of countless identities and cultures in a global city like New York City.