Hong Kong, a former British colony, is today a multinational territory in China that has Chinese and English as its official languages. As a visitor or newcomer to Hong Kong, one can most immediately notice the material realization of these two official languages on major, official signages. I specify major and official because while government-operated spaces, commercial areas, and corporations dealing in international markets have signs and other informational forms in both English and Chinese, smaller, locally-owned institutions like street food stands or family diners will not. 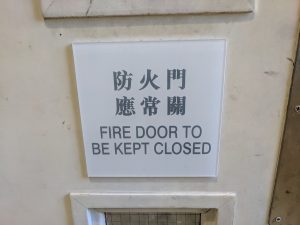 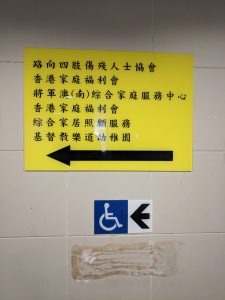 This is not to say that things like newspapers and public advertisements are necessarily published with both languages on the same surface either. Take, for example, the following two pictures taken at a MTR train station: 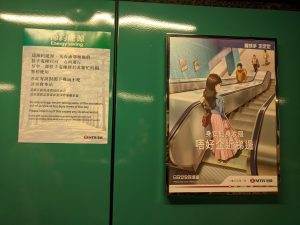 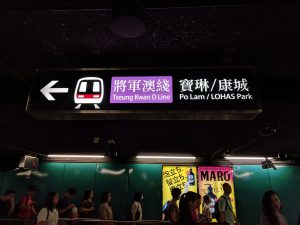 In the realm of spoken language, most Hong Kong natives and locals speak Cantonese and it is often the default in casual conversation between locals. After Cantonese comes Mandarin and English, which most natives, especially those of younger generations or those working in tourist-heavy areas, often know fluently or have enough limited understanding for taking care of simple tasks (i.e. placing a food order). Regarding these two statements, it is important to note that due to Hong Kong’s multinational nature, not every local (defined, for the purpose of this essay, as someone who lives and works in Hong Kong) speaks Cantonese or ever learns how to. This can be due to a multitude of reasons, one of which can be that their company uses English, Mandarin, or another language as the default language and they are able to get by without knowing Cantonese. An example of someone like this is one of the program coordinators at AIC, the organization that co-sponsors this study abroad trip with Emory. She is a local of Hong Kong who has lived in and gone to school here since elementary. However, because she went to an international school that used English and because the circumstances she found herself in growing up did not absolutely require her having to know Cantonese, she never learned it.

The textbook speaks about the use of language as a method individuals and groups use to indicate status or affiliation. Because Cantonese is usually the default in casual conversation, a situation in which two friends who are natives of Hong Kong and who grew up speaking Cantonese but who suddenly started speaking to English to each other casually would be strange. In this scenario, the two can be seen to perhaps be trying to indicate their affiliation to groups that typically use English as a default. Given that one of the four core subjects in Hong Kong’s university entrance exams, the Diploma of Secondary Education (DSE) exam, is English, a working proficiency of English can indicate education level and perhaps higher social standing as a consequential association.

In my first week at Hong Kong, my friends and I checked out a place called Visage One, a hair salon that turns into a jazz bar on Saturdays. Located in a hidden spot up a hill in the hipster part of Hong Kong, it is frequented by the kind of outwardly artistic and hipster types one would often see at contemporary art museums or other niche, artistic spaces. To fit the vibe of the space, the guest musician largely sung English songs and spoke English to the audience, who spoke English back to him and with each other. This place had a couple of tourists because of its novelty as a salon turned jazz bar, but it was by no means a tourist site because it was, after all, a hidden gem. The scattered use of Cantonese and Mandarin mixed in with slightly broken English also gave away the fact that most of the audience members were not native English speakers. Language “is a way of carefully selecting and representing the world so as to give it a particular meaning” (337). In this way, the use of English in this space became a strategic tool wielded by the group to symbolize, consciously or not, status (of the group as intellectually and culturally higher class) and affiliation (of the group with a global artistic community) (332). Should we view the language landscape in the way Leeman and Modan proposes, as a “perspectivized, ideological representation of space,” then this example illustrates that (333).