Hong Kong is the multicultural bastion of the East. Rather than promoting a work-culture of uniformity and conformity like Korea and Japan, this city invites and even encourages expats from all over the world. It’s an East-meets-West kind of city – and the linguistic landscape reflects that. However, I’m curious if this advent of Western and English influences throughout the city is completely welcomed or viewed as a threat to traditional Chinese/Hong Kong culture by locals. In theory, if there are more signs in English than it shows a stronger Western influence on the city; on the contrary, more signs written in Cantonese shows a stronger effort to preserve traditional Chinese/Hong Kong culture. After all, “material realizations of language are strategic tools that are wielded in local politics, power struggles, and competing claims to space” (Leeman and Modan 333).

Hearing that Hong Kong was a British colony since 1997, I came in to the city fully expecting everyone to speak near-perfect English. Frankly, I thought Hong Kong would be a lot like English-speaking Singapore. What I found, however, was a place dominated by the Cantonese language. The first restaurant I visited in Hong Kong had a menu written entirely in Cantonese, with no English options to be found. I essentially had to guess what I was ordering, using my fingers rather than my words. The servers at the restaurant could speak some English, but frankly not enough to fully understand exactly what I was ordering. After spending more time in Hong Kong this made a lot of sense, as I was in a local-dominated area far from the Central Business District – a less dense area called Chai Wan. This changed significantly the closer I got to the business district of Hong Kong. In Central, Sheung Wan, or Causeway Bay nearly every sign was either written in English or had English words alongside the Cantonese words. This is very similar to the “second wave of business development” that “directly translate[d]” an establishment’s name from Chinese to English or vice-versa (Leeman and Modan 352). All servers were very proficient in English and were quite talented at recognizing (and targeting) English-speaking foreigners. 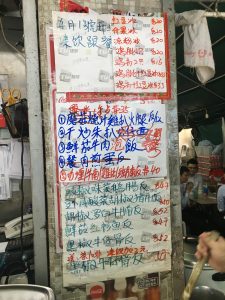 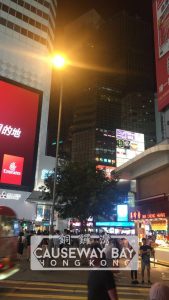 It seems that most of the major capitalist structures within the city (esp. Finance) relies on Western influence and language, which makes a lot of sense as “language in the landscape […] spatialize[s] commercialization” (Leeman and Modan 339). Free market capitalism quite literally runs Hong Kong – the domination of this system is primarily due to a history of Western colonial influence. The closer you get to the Central Business District, the more English you’ll start to read and use. As you get closer to Kowloon, the new Territories, or generally any area away from Central or Sheung Wan, you’ll start to see and hear a lot more Cantonese. Public transportation services like buses or the MTR utilize both English and Cantonese, respecting the needs of both locals and foreign expats.

Ultimately, it seems that rather than attempting to expunge English from the linguistic landscape, Hong Kong and its government has learned to accept Western colonial influence in the city. Regardless, the Cantonese language still dominates – I’m curious of the reason for this. With such a recent presence of colonialism, one would think English would have a stronger presence. Maybe one day I’ll grab a boat at Stanley and spend some time reading a book on Hong Kong’s colonial history. Enjoy this picture. Thanks! 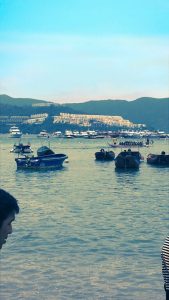