With its growing economy and diverse population, Hong Kong provides the perfect environment for cultural diversity. Hong Kong citizens have incorporated many of the different into their daily lives. Throughout the city, there are evidences of cultural diversity especially in the language spoken and the signs.
In Hong Kong, the majority of the population speaks Cantonese followed by English and Mandarin Chinese. The signs around the city also exemplified this as many of the signs have English translation below the Chinese characters. For example, in the public service announcement sign below in image 1, there are Chinese and English translation on it. Being able to read some Chinese, I saw that the translation between the Chinese and English was very accurate with little discrepancy in the meaning. Additionally, in the article, it quoted Landry and Bourhis that “Having one’s own language enshrined on most private and government signs should contribute to the feeling that the in-group language has value and status relative to other languages in the sociolinguistic setting” (Leeman 334). This can be seen all around the signs in the MTR station, supporting a multilingual community. Also, the Chinese characters are displayed above the English translation, showing that although Hong Kong values both Chinese and English, Chinese is valued greater.
Another example of the cultural makeup in Hong Kong is the difference in restaurant ads in different parts of the city. For example, in the more modernized parts of the city, many of the restaurant names, including the menu would have Chinese and English. This is shown in image 2 and 3. However, in the traditional part of the city, the restaurant names might only have Chinese names, shown in image 4. The menus taped outside the restaurant would also be in Chinese unless you request for an English one. The restaurant also resembles the earlier establishment discussed in the article with its use of Chinese, and red and gold in its signage (Leeman 350). In the article, it stated that English is typically used to signify modernity and it can be applied to this situation (Leeman 335). The restaurants that accommodate both English and Chinese were from high-end restaurants, typically in nice part of the city. The restaurants that have only Chinese were typically “street shops,” that serves mainly the locals. This contrast showed that the different culture that Hong Kong supports: the modern world and the traditional world.
Despite Hong Kong using the same writing system as China, it has also incorporated some English words implicitly into its system. In the restaurant ad below shown in image 5, the word strawberry is an example of this. In Mandarin, the word for strawberry is “草莓” (Cǎo méi), so typically it should have been the same writing with a Cantonese pronunciation. However, in the restaurant ad, the word for strawberry is “士多啤梨” (si6 do1 be1 lei4), which is a translation of the English pronunciation for strawberry. This shows that Hong Kong holds English to high regards with Cantonese. This was rather not surprising to me as the two primary languages in Hong Kong prior to the 1997 Handover was Cantonese and English. Also, similar to image 1, the English translation is below the Chinese, indicating that Chinese is valued more. One interesting that I found from this ad was that the English translation of the Chinese were not so accurate. For example, the translation of “冰川甜酸橙花骨” is Glacier Sweet Sour Flower Bone, but they had to adjust the translation to make it sound more appetizing. This shows that Hong Kong put in effort to incorporate English in its culture.
Overall, being able to tour Hong Kong has been a rewarding experience. I was able to see the different incorporation of American culture into Hong Kong culture through the use of language, food, and style of dress. Most of the signs will have English translation to support the multilingual community. Through my experience, I have noticed that whether the sign is public or private, both contains Chinese and English translation. I think this is because English have been integrated deeply in Hong Kong culture. 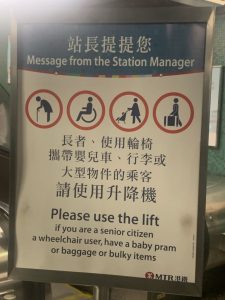 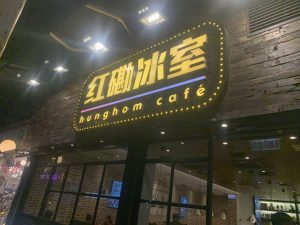 Image #2: Restaurant with Chinese and English 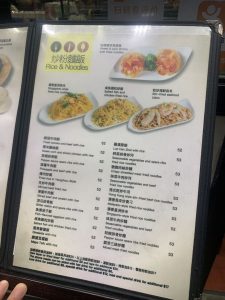 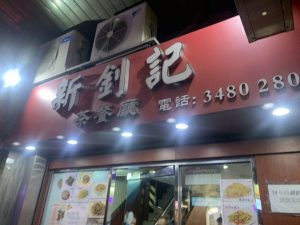 Image #4: Restaurant with only Chinese 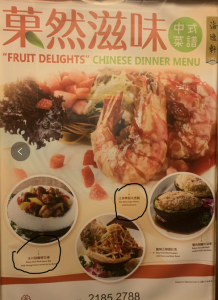