Dublin is a city filled with a variety of different people from all over, however, the country has a deep respect and pride for their own native language, and this is seen throughout the city. The obvious example of language diversity in Dublin is their use of the Irish Gaelic language. Only about 5% of the population actually speaks the language, however you cannot get around the city without hearing or seeing the language. In fact, one of my colleagues who is originally from Dublin told me when people talk about what streets they have been on in Dublin she sometimes gets confused because some streets she only knows the Gaelic name and others only the English name for the streets. Luckily, most people in Dublin don’t even speak in terms of street names but rather by proximity. Overall, it is interesting to see how Ireland’s linguistic landscape differs from where I grew up. I have been so used to seeing every sign around me in English and Spanish, that it is odd to see Irish Gaelic where Spanish usually is for me. I think this difference also really changes the importance of language and learning other languages in the country. Where I am from it is seen as crucial to learn Spanish because it is all around you. However, here, it seems more crucial to preserve a language from the past in a way of retaining the pride of the country and possibly increasing the city’s tourism. This idea of altering the urban landscape in a way to promote a specific type of “culture” in order to increase tourism and commerce is exactly what Leeman and Modan discussed. Because only 5% of the population speaks Irish Gaelic, it makes little economic sense to spend the time, effort, and money on creating signs with both English and Irish Gaelic.

What I love about my office is the diversity. On a regular basis I hear everything from Spanish to Hungarian spoken. However, I do not see this as often around Dublin. Other than the kids from Spain that live at the University nearby, most people who live in Dublin seem to only speak English. A girl from Dublin joked that people from Dublin can never speak another language because their accent gets in the way. I was curious if that was actually true, so I did a bit of research and actually found statistics showing that one in ten homes in Dublin speak more than one language at home. Compare this with the United States which is one in five. I find this a bit surprising considering the country as a whole is becoming relatively diverse. This does not mean there is no other languages seen around Dublin city center. Places such as Parnell street have a large Chinese community where you will see signs in mostly Chinese. One place that used a different language that surprised me was the Starbucks coffee cups. On all of the to-go cups, Starbucks translates everything in English and French. This I think is ironic considering to-go coffee is not popular in France. However, after a little research I found that Starbucks is currently making a big push to advertise to the French population because it views the country as an untapped market.

Dublin is a beautiful city that is growing in diversity both culturally and linguistically. However, I think those born in Dublin have a way to go before the introduction of a new language becomes common in the City center. With the importance and commodification of Irish Gaelic and the lack of a clear secondary language, Dublin will continue to focus mostly on their connection with the English language for the time being. 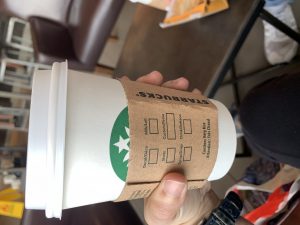 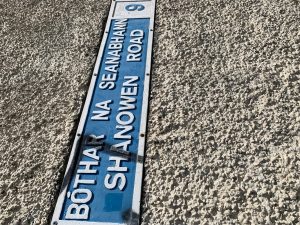 3 thoughts on “Dublin and Irish Gaelic – commodity or pride”