The Gaelic language appears only in parts of Dublin life. The language seems to be more for aesthetic purposes rather than something that is used heavily in daily life. Everyone in Ireland primarily speaks English. In short my time here, I have not found myself in a situation in which I was struggling due to a language barrier. The languages I have seen here are English and Gaelic. I have not heard anyone speak Gaelic, but it is present on all the road signs. It is also written on the bus every time a bus stop approaches; the automated voice says the stop in English and Gaelic. The neighborhoods are also distinguished by numbers. They also have names of the neighborhoods on signs which are both in English and Gaelic, they act more as directional signs than anything else. The signs and stops suggest that Dublin is supporting a bilingual community, but that is not necessarily the case. I was speaking with my coworkers about Gaelic, they told me that many people in Dublin do not actually fluently speak the language. Many learn it in their childhood, but do not regularly speak it in their daily lives. I have only met one person that thoroughly knows the language. There are, however, small pockets around Ireland that do speak Gaelic fluently and daily, such as in the Aran Islands, but that is not representative of Dublin at all. All of the private enterprises I have seen are written in English only. Malls, gas stations, restaurants, and small stores are all in English. It is interesting that schools are sometimes referred to in both English and Gaelic, but it is not a big change. For example, the school my center is located at is called St. Collmicles, but it is also referred to as Scoil Colmcilles. The publically written language is mostly the same as the speech you hear on the street. English is spoken everywhere, but I have yet to hear Gaelic in casual conversation throughout.

Similar to Washington DC’s Chinatown, I believe the usage of the Gaelic is a part of the sociohistorical context. Dublin’s history would in fact have many people who spoke Gaelic reside in the city. As the city grew in population and became more modernized, English became more popular. Honestly, it does not make much sense that Gaelic is used only for street signs, and not for any businesses or in daily usage. Similar to Chinese writing on Chinatown’s streets is “indicative of the geographically informed concept of landscape in that the force of such writing is overwhelmingly aesthetic; thus, it works to privilege the visual.” (Leeman & Modan, 358). Gaelic is used very freely on signs throughout the City Centre and Temple Bar district, which are very tourist heavy areas. Like Chinese writing in DC’s Chinatown, it is less of a means of communication and interaction, but just something that is an “ornament” in the larger landscape. It is more of a small way to be reminded of culture. Gaelic culture is preserved more through things such as sports rather than language.

It is interesting that the diversity in Ireland is increasing, so maybe in ten or twenty years, different languages can be implemented into the landscape as a means of legitimate utilization, and not something that is merely ornamental. 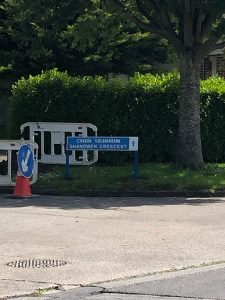 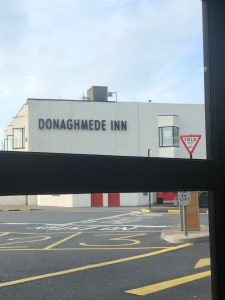 One thought on “Essay 3- Linguistic Landscape”