Before coming to Ireland, I had always known that the Irish language, Gaelic, existed, however, I never thought that it was used. Instead I was under the assumption that, similar to my native language, Greek, that it was mostly unused language that is only used locally. Once I had arrived, it was much to my surprise that while it is not commonly spoken, the Irish language is proudly announced as the first language of Ireland, rather than English. According to the reading by Leeman and Modan, a linguistic landscape can be understood as “a way of carefully selecting and representing the world so as to give it a particular meaning” (Leeman and Modan, 337). Further, it is important in constructing and maintaining an identity. When looking at the linguistic landscape of Ireland, and where the Gaelic language takes place in it, it is clear to see it is mostly a decorative language that evokes a sense of pride amongst the Irish. Through their national language, the Irish continue to maintain their identity and their pride in their culture and heritage.

Dublin in itself is an up and coming multicultural city, however, the majority of the language that I hear is English. It is very rare to hear another language unless it is from a group of tourists who are visiting from another country. This is in contrast to the way that public signs are presented all over Ireland. They demonstrate a multilingual community in that a majority of public, government mandated signs are written in Gaelic first, and underneath are the English translations. This further emphasizes how the national language of Ireland is not English, as many may assume. This is not just limited to pubic signs, but also all over public transit. However, private businesses and store signs are not see to be written in Gaelic with English translations, and instead are mostly English.

Below are examples of these signs around the city. The first is a loading bay sign, while the second is a sign for tourists that direct them to the major attractions around the city. I find this second sign to be the most interesting. The reason for this is that, while one would assume that a sign meant for tourists would be either solely in English or organized in a manner that promotes English before Gaelic, this is not the case. I believe that the reason for this is to help “commodify” the Irish culture.

Leeman and Modan explained that with the growth of suburbs, cities attempted to draw in more visitors by turning to public-private initiatives that would promote a certain type of culture (Leeman and Modan, 338). This culture was then “used to both to frame public space and to legitimate the appropriation of that space by private and commercial interests” (Leeman and Modan, 338). It is my belief that the reason that even tourist directed signs are primarily written in Gaelic is to use the Irish culture as a way to draw interest by tourists and promote more visitation. It creates an environment that is unique to only Ireland and therefore piques intrigue from those who visit. The end result then boosts tourism and commercial businesses. Overall, I believe that the use of the Gaelic language in Ireland is not only to maintain the Irish identity and pride in their heritage, but also is a means to promote tourism. 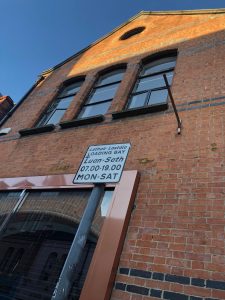 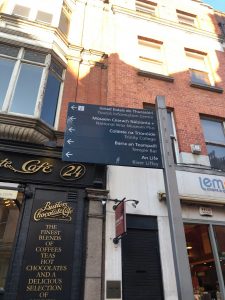