I am living and working at New York City, and I consequently did some field research around the place I live, at 14th street, and the place I work, at 51st street. At these areas, English dominates these areas and unexceptionally serves English speaking population. Restaurants probably provide the only limited variations. Inspired by Leeman approach to research LL, I see the necessity to dive deeper into identifying the meaning of different languages. In addition, by analyzing the LL, I would like to study the ethnicity presence and its projection on LL. Therefore, I mainly focus on exotic restaurants to analyze LL variations at English dominant areas and how residents around those areas influence those variations.

This area used to be an upscale area in the early history of New York, and it is now mainly the aggregation of commercial streets and apartments. My first impression to this area is the lack of language diversity. Walking along the 14th street, I occasionally see only a few restaurants with foreign language facades, mostly Chinese and Japanese. The ethnicity of pedestrians on the streets perfectly matches the overall national average ethnicity percentage, mostly White, fewer Black and Latino/Latina, and even fewer Asian. Although the comparatively low percentage of Asian population, Asian restaurants have a more prominent presence around this area such as Chinese Guangdong Tim Sim restaurants, Sichuan flavor restaurants, Japanese ramen and steak restaurants… The language use in these restaurants is unanimously English, with only façade displaying Chinese or Japanese to manifest their authenticity. The functional signs inside and outside are all in English as well, such as menu, restroom signs and “take out” sign. 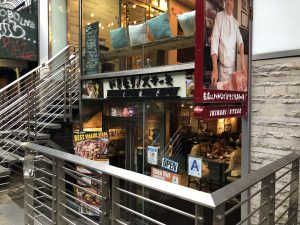 This area now is known as midtown area, where most new finance institutions sit. Unlike the traditional finance street at downtown, 51st street has more young technology focused venture capitals and international banks such as BNP and UBS. The population is more diverse than 14th street, more tourists and more diverse employees in international institutions. It is very interesting to observe the correlation between population and language vitality. At 51st street, between 6th avenue and 7th avenue, I observed a much higher percentage of Chinese population. I hear Chinese much more often and menus and signs in and outside the restaurants show a strong presence of Chinese.

It is very interesting to see even a Japanese ramen restaurant have all the Chinese signs (not Kanji, but Chinese characters really used as Chinese) beside the English sign! For example, one sign written “Employees only!” is right followed by its Chinese translation. In this case, Chinese signs serve specifically for Chinese customers and the ideational meaning cannot be clearer: a Chinese sign inside a Japanese ramen restaurant can have no symbolic meaning!

After finishing a bowl of ramen, I found something more surprising. A Chinese character was printed at the bottom of that bowl, “囍”.

“囍” is pronounced as “Xi”, meaning two good things happening together, often used as an auspicious sign at marriage. In this case, it is very hard to address whether it is ideational or symbolic because none of them makes sense. Ideational? I do not see the connection between marria  ge and ramen; symbolic? A red bowl, with a typical Chinese character on it, is too obvious to not to be a Chinese culture representation. I therefore bring my own idea to try to explain this phenomenon in LL. I think as the population from a certain background dominates a small area, anything overall is under the custom from that certain cultural background. Therefore, it can have no meaning but simply a good representation of an extremely strong cultural vitality and presence. Although a bowl quintessentially is different from public sign because it is too trivial to be considered public, it reflects the dominance of a kind of culture. The purveyor of this restaurants can possibly only buy Chinese bowls around this area although he or she did not intend to do so. This area was so small but concentrated that it is an enclave encompassed by financial behemoths, and the very local Chinese presence significantly influenced the local LL.

Most of the time, a lack of culture diversity is the most common case; however, by scrutinizing small details into those limited variations, LL starts to speak about cultural and discourse system landscapes. From my observation to these two areas, a concentrated discourse system or ethnicity group has a huge influence on local LL and is hardly influenced by its surroundings.