Tokyo is the capital city of Japan, and it is certainly the most global city in Japan. By examining the public signs and notification around the city, it is easy to find that the linguistic landscape in Tokyo is very simple and is also containing some “simplifying thought”.

Here is the visitor information panel for foreign visitors which is set at the front of disaster preparedness training center, Bosaikan Ikebukuro. 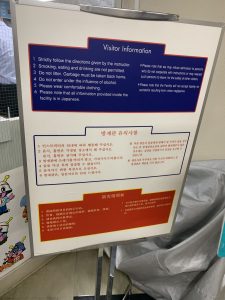 The languages shown on this panel is English, Korean, and Chinese. Bosaikan Ikebukuro is a life safety learning center established by Tokyo Fire Department where visitors are able to experience disasters such as fire and earthquake, using the simulation equipment, and to learn how to behave correctly and how to use the emergency products such as fire extinguisher during the disaster. The center is used for mandatory education for company employees, students, and some neighborhood associations (tfd.metor.tokyo.jp). Thus, this panel infers that the general visitors of this life safety learning center consists of English, Korean, Chinese, and certainly Japanese speakers.

However, there is another “hidden” common language exists in Tokyo. As the training session comes to learn how to use the fire extinguisher, there are four options showed for the language subtitles for introduction videos. 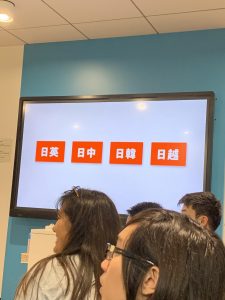 The four options are “Japanese-English”, “Japanese-Chinese”, “Japanese-Korean”, and “Japanese-Vietnamese” from left to right. Although it is quite rare to see Vietnamese words all around Tokyo, there exists the subtitle for Vietnamese, which is made by official Japanese government organization, Tokyo Fire Department. This is a crucial evidence of the existence of Vietnamese culture. They are common enough to have an official subtitle for them, but the community is not as large as other four main languages communities.

The shape of linguistic landscape is also shown in several different places. 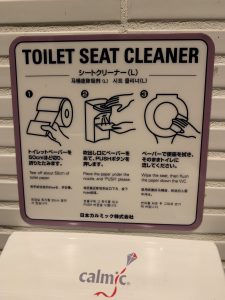 This is a picture taken in the restroom of Tokyo Sunshine City, which is located at Ikebukuro. The panel shows how to use the Toilet Seat Cleaner in Japanese, English, Chinese, and Korean. Tokyo Sunshine City is a huge shopping mall near the Ikebukuro JR station. There is also one of the three Pokémon Center in Tokyo located here. 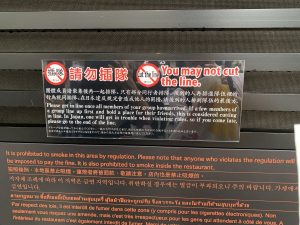 This is a sign set outside of a famous Ramen restaurant, Mutekiya, which is also located at Ikebukuro. The notification is written in Japanese, English, Chinese, and Korean.

Those two signs in Tokyo Sunshine City and Mutekiya show that the general languages except Japanese which are used in Tokyo are English, Chinese, and Korean. Vietnamese is really rare in this city, but from the subtitles we see in Bosaikan show that Vietnamese is also part of the linguistic landscape of Tokyo. I am also able to see some Vietnamese people speaking Vietnamese near the Warabi JR station. Also, in the shared house where I am living right now, there are several German students studying abroad to Japan, but the notification in the shared house is written in only those four main languages. Languages other than those four main languages do exist, but they are not the main part of the linguistic landscape in Tokyo.

Here comes to the problem that why Vietnamese and those other languages do not belong to the linguistic landscape of Tokyo. The answer is very simple, according to my analysis. It is because they are the minorities.

Japanese people learn English from their middle school, so English is very common for Japanese and there do exist many loan words come from English in Japanese. For Chinese and Korean, they are the two biggest countries near Japan, and there are thousands of Chinese and Korean students coming into Japan for study. Thus, these three languages are certainly the part of the linguistic landscape of Tokyo.

However, those Vietnamese, German, and people coming from other countries are minorities compared to those three language communities. At the same time, most of them from those minority groups can speak English. So, in my opinion, Japanese people “simplify” the language shown on the road signs and the information panels.

6 thoughts on “Linguistic Landscape in Tokyo”