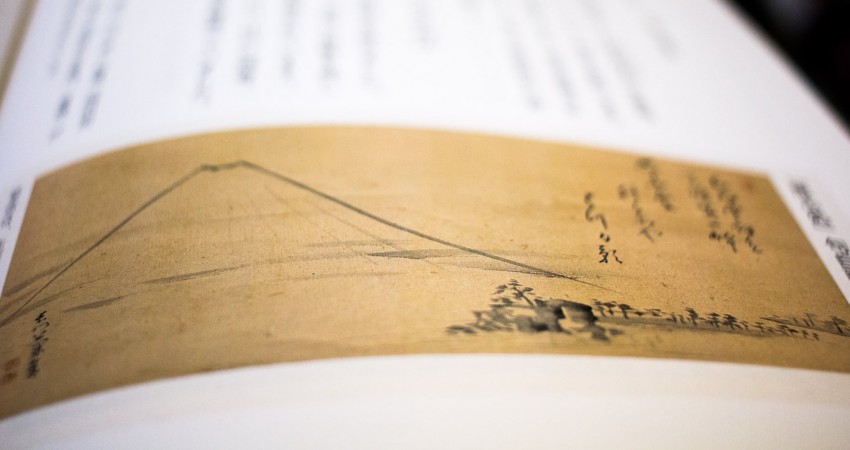 Kikusha died at the age of 74, and had an extremely productive and well-documented life. Although the two-volume set of her collected works published in the year 2000 contains only two texts published during her lifetime, it also includes about thirty-five manuscripts of prose and poetry and thirty letters, and represents a formidable amount of material.  Kikusha’s first journey began in 1781 and took her from Shimonoseki as far north as Niigata, to Edo, and back again in the course of about three-and-a-half years.

Kikusha was a member of a samurai family. She was born in Tasuki, a rural area near modern Shimonoseki, and was given the name Michi. Her father was a doctor; she had two sisters and a brother who lived into adulthood. She married at 16 to Murata Rinosuke 村田利之助 who was distantly related both to her mother and to her father. She and Rinosuke had no children by the time he died when she was 24. Within the next two years she settled the property from her marriage onto an adopted son and daughter-in-law, moved back in with her father and mother who had since relocated to the branch domain capital in Chôfu (Shimonoseki), and caused her name to be reentered onto her natal family register. From this point it seems like she began a completely new existence, one that was remarkably autonomous and self-directed.

Kikusha’s father must have been well-educated, as medical doctors in early modern Japan depended on remedies drawn from Chinese texts; he was known to compose poems in Chinese and may also have been interested in haikai. Documentary evidence of Kikusha’s association with other haikai poets dates from 1778, when she was 26. This is in the form of a collection of fifty-seven verses contributed by local haikai poets in celebration of her receiving her haigô

Three years later, when she was 29, Kikusha left for her first journey in late summer. Her first stop was Hitomaru Shrine in Nagato, and second stop was at Seikôji 清光寺, a Pure Land (Jôdo Shinshû 浄土真宗) temple in the castle town of Hagi. She took the tonsure at Seikôji. It’s not clear how long this process took, but it could have been no more than a few months: having asked a local poet for a letter of introduction to Chôboen Sankyô 朝暮園傘狂, the sixth generation leader of the Minô School, she was on the road again by the middle of the Tenth Month. She stopped briefly at Tenmangu in Hôfu, and traveled thence by water to Osaka and then quickly to Kyoto, where she spent seven days taking part in the Hôonkô 報恩講 ceremonies in honor of Shinran (the Jodô Shinshû sect’s founder) that were held at the end of the Eleventh Month at Nishi Honganji Temple.

With the new year, her haikai activities began in earnest, and she stayed for a few months taking part in haikai gatherings with Sankyô and his disciples in the vicinity of Fuwa, and then she started a trip that would take her north across the country along the Japan Sea coast, across the Hokuriku and Tôhoku areas, and thence to Edo. On this trip, the sites she visited were of significance both to haikai poets and to Jôdo Shinshû believers: they included areas that Bashô visited on his many journeys and were also places important in the life story of Shinran.