We were able to visit Stekoa Creek on Sunday, April 8, 2018.  We followed some paths of the creek in both expected and unexpected locations.  Some parts of the creek were filled with trash and plastics, while other parts would pass through developed areas (i.e. next to a pharmacy) and recreational areas like parks.  However, these locations make it easy for people to access and pollute.

Stekoa Creek is known as a polluted creek that is located in Rabun County, Georgia.  Stekoa Creek Park was opened to the public on August 2015 and was built by the Chattooga Conservancy.  Building the park involved cleaning up the trash and rubble that polluted the creek, in addition to the removal of invasive species, such as kudzu and privet, by the community.

Below you can find a map of different parts of Stekoa Creek, including coordinates and images of each location.

Stekoa Creek starts from Black Rock Mountain and goes through several different locations such as industrial sites, ranches, highways, and residential areas, with potential of high water pollution build up as the creek runs along. Stekoa Creek runs though residential area after deviating from the mountain and our team were not able to track down this area because the creek was located in the personal property. Few miles away from the mountain, the creek followed through main road along with commissaries, restaurants industrial sites, and parking lots where large quantity of trash and residues were present and high possibility of runoff during rainy seasons. Also, we observed several drainages located along the creek which may increase risk of contamination of water with poor management status. Small and moderate size ranches were located in throughout the creek raising concern of bio-residuals, organic matters and microorganisms, heavily impacting the water quality of nearby environment including Stekoa Creek.
Stekoa Creek passes through Stekoa Creek Park which is located next to Clayton Highway 441 with main purpose and ambition of removing a invasive plants, garbage, and building materials and replace them with native trees, flowers, and trails for the community. After restoration, Stekoa Creek Park opened to the public in August 2015 for recreation and natural study purposes. Cleaning Stekoa Creek Park involved in getting rid of more than 200 tons of building materials and eradicating invasive plants such as kudzu and poison ivy without using herbicides to prevent negative impact on the river and surrounding area (Chattooga Conservancy, 2017). A rain garden was constructed in the park to distillate polluted discharge of water from Highway 441 before going into Stekoa Creek and bioengineering practices were conducted to stop the massive erosion which was major problem in the area (Chattooga Conservancy, 2017).
On the site, our team noticed that the park was not as utilized as we thought it would be. One of the reasons for low utilization could be a location of the park which is located right next to the highway. A plan to reduce pollution runoff from the highway with the park was legitimate; however, noise and pollution generated from the highway may have hindered people from relaxing. Other reason could be that the park seems to lack in management because our team had hard time finding any flowers (in “flower garden”) or indicating native trees planted around the park. Effectiveness of rain garden and bioengineering practices to prevent erosion has not been measured which could be conducted next time we visit the park.
Finally, few of our last mark points of the Stekoa Creek are in the residential areas. Several houses deviated creek water for their personal uses, mainly for pond at a lawn. This increases potential of contamination of water such as herbicides, lead paints, building materials, and garbage generated from residential area. With different sources of contamination, Stekoa Creek runs through mountains and is discharged in to Chattooga River, affecting main river stream of Northeastern Georgia. Chattooga River passes through several lakes such as Lake Hartwell, Lake Thurman, and Lake Russel, and eventually reaches to Atlantic Ocean (National Water Quality Monitoring Council).

Georgia’s first biomass-fueled powering plant is the Rabun-Gap Biomass Plant, established by Multitrade Rabun Gap LLC. Multitrade is owned by an energy management company based in Syracuse, NY called PurEnergy LLC. The plant has a production capacity of 20MW, and its electric customer is the Coweta-Fayette Membership corporation. This project reused an old textile mill by reusing the mill’s boiler and ancillary equipment. To convert the mill to a biomass plant, a cooling tower, turbine, energy generator and other equipment was added. Georgia is #1 in the nation for the cultivation of commercial timberland and is #3 in the nation for biomass potential, given the amount of available biomass in the state (Stuckey, 2010). We stumbled upon the plant while tracing the Stekoa Creek by car. While the plant was not directly situated by the creek, it is unclear of its environmental impacts given the carbon emissions generally given off by the burning of biomass and the unknown sinks of the residue created by biomass burning. 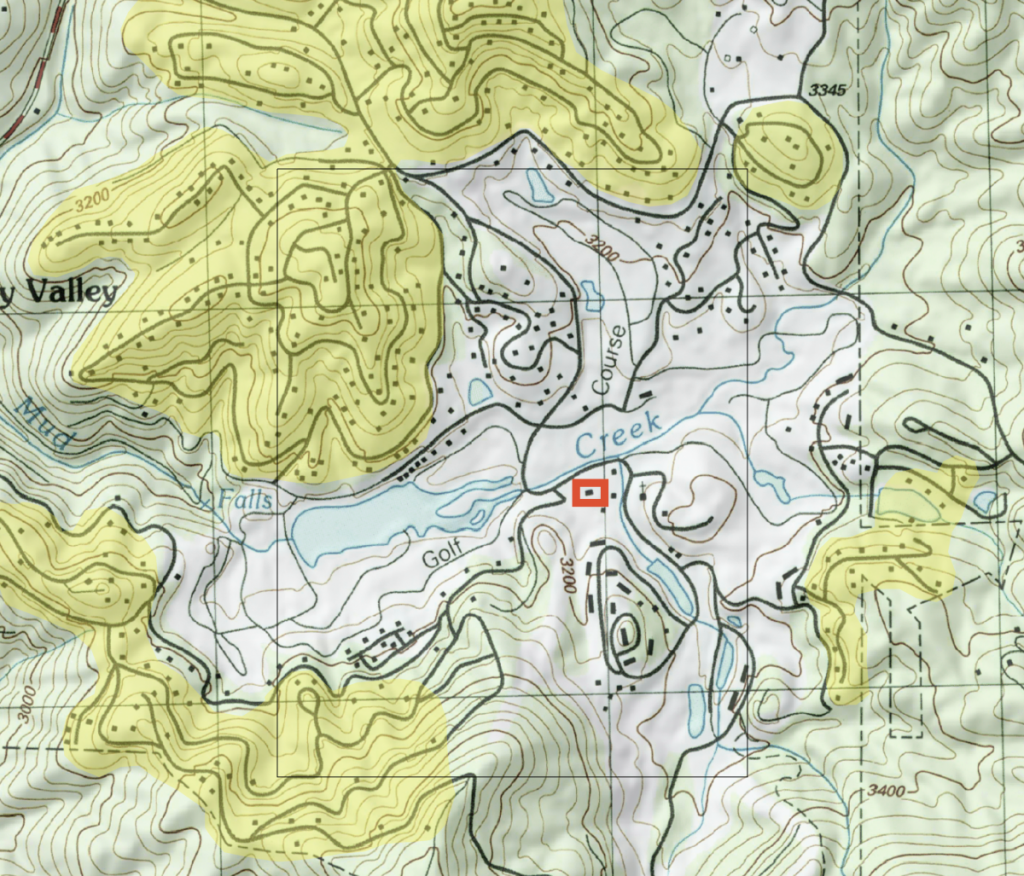 Sky Valley presents an interesting topography comparanda to Dahlonega. Effectively, all the key places in the town are located in the valley. While perhaps not the best comparanda in terms of commonalities of townships, Sky Valley originated as a resort town (pseudo -country club). Hit hard by the housing bubble in the early 2000s, Sky Valley stands as a shell of its former glory and a reminder of the economic crisis our country is still recovering from. From a planning perspective, the valley is not entirely self sufficient as it is mostly residential with few communal/recreational places, and little to no commercial development. Interesting, the location of the communal places in the valley increases their visibility as the residential housing in the area encircles the valley on higher elevated terrain. The topographic map above shows this formation, with the higher elevated residential zones highlighted in yellow, enclosing the depression of the valley. The steep terrain is not the easiest or most cost effective place to build, many houses rely heavily on extensive man made supports/stilts.

The old ski lodge nested in the heart of the valley is a visual reinforcement of the town’s economic perils (on topo map the red box). While architecturally stunning, upkeep has been neglected and the building is entering into the point where restorative costs likely exceed current capital. This building reflects a quintessential northern Georgia mountain aesthetic, with cedar shingle roofing on steep exaggerated eves create an effective snow and water repellent that suit the local climate. Large portions of the roof are covered with lichen and other moss-like greenery. While almost certainly a long term structural threat, the organic build up ads to the buildings charm.

This is no different for Stekoa Creek, which runs through the North Georgia town of Clayton. However, there was not a consistent presence of leaf packs, which are vital to stream ecosystem health, as stated. It was noted that, in less populous areas along the stream, there an abundance of leaf packs alongside woody debris. This lack of direct human interference (“direct” meaning channelization or other serious intervention) has allowed the stream to maintain some degree of ecological health.

In areas with higher human density (such as beside parking lots or major roads), there was a distinct absence of leaf packs. The high amounts of run off, tree clearing, and channelization that go alongside development prevent the build up of leaf packs. This indicates that human presence is detrimental for macroinvertebrate and thus overall stream health.