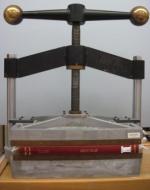 Artist Benny Andrews began his career as an outsider, working in a representational style just as abstract expressionism was gaining popularity. Separate from his artwork, Andrews created scrapbooks, and three of them are being preserved at Emory. One scrapbook chronicles his family life in interview format with accompanying photographs. The other two scrapbooks describe Andrews’ military career while stationed at various Air Force base locations in Texas, California, and Alaska. 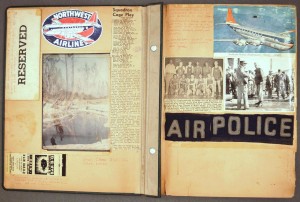 Best known to the public for his paintings, Andrews is not remembered by most people for his years spent in the military. Between 1950 and 1954, he served in the Korean War, rising to the level of staff sergeant. During his tours of duty, Andrews constructed scrapbooks of his travels, squadrons, and military experiences.

All three scrapbooks are traditionally-bound album structures, either post-bound or laced at the spine. The covers are intact, and the overall binding structures are strong. The support pages are acidic construction paper, so they have become very fragile over time. Both of the military-themed scrapbooks include items, photographs, and ephemera adhered to the pages with glue. One depicts his tour in Alaska, and it also has layers of pressure-sensitive tape on top of the glued items. 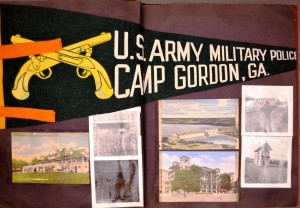 A different conservation treatment approach will be required for each album, but it is the one with extra tape that needs the most attention. Yellowed and brittle, most of this tape has failed and is releasing easily. Simply removing it manually might be enough, as the remaining adhesive residue is minimal. The brittle, paper support pages have Andrews’ handwriting on them as he described important occasions or photographs. Removing all of the items from these pages would risk losing the original handwriting and the integrity of the fragile items. Instead, the full pages will be encapsulated between two larger sheets of clear, polyester film for protection. Finally, new covers will be made to fit the bigger pages. The original covers will be retained together with the new binding in a custom-made box. 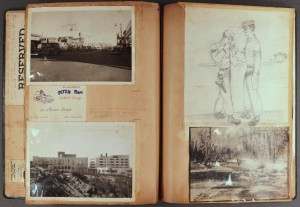 The scrapbook album from Andrews’ service in Alaska may have been constructed in 1954, as that is the only dated reference in it. Many patches and small pennants made of felt are in the two military scrapbooks. This adds another level of treatment consideration for such three-dimensional items. Extra space in the spine will have to be added into the final binding structure, reducing pressure on those thicker pages. 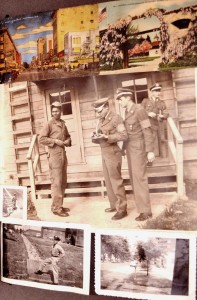 Benny Andrews was born on November 13, 1930 in Madison, Georgia. He was the second of ten children born to George and Viola Andrews. His parents were cotton sharecroppers. George was a self-taught artist, and Viola was a writer. Both parents encouraged their childrens’ creative pursuits, especially in drawing and painting, and it was Andrews’ mother who was his strongest influence.

Andrews attended a segregated elementary school in a one-and-a-half-room log cabin. As a student at Burney High School, Andrews experienced long interruptions in his schooling if he was needed on the plantation where his family lived and worked. Even with sporadic attendance, he established his artistic talent and also became active in the local 4-H Club, an agricultural program for youth. 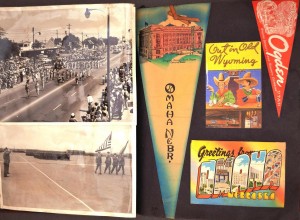 In 1948, after graduating from Burney High School, Andrews moved to Atlanta and lived at the Butler Street YMCA. There, the executive director helped Andrews find a job. When the young artist received a commission to paint a mural for a local café, the same director provided Andrews with work space. Later that year, the 4-H Club awarded Andrews with a $400 scholarship to be split evenly over two years. Andrews entered Fort Valley State College and began working in the art department. Always supportive, his family picked scrap cotton to pay the portion of his tuition not covered by the scholarship. Only one art class was offered at Fort Valley, an art appreciation course, in which Andrews enrolled six times.

When Andrews’ scholarship expired in 1950, he no longer could afford to attend Fort Valley. To defray the cost of college tuition, Andrews joined the United States Air Force, knowing that he could take advantage of the GI Bill educational benefits. Upon his honorable discharge in 1954, Andrews moved to Chicago, entered the School of the Art Institute of Chicago, and began to define his artistic style. 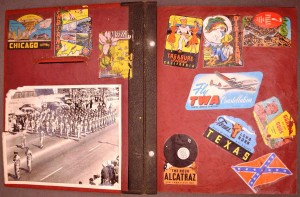 Prior to arriving in Chicago, Andrews had never even visited a museum. He felt confined by the rigid emphasis of the Art Institute program, as it concentrated upon the Abstract Expressionist movement. Andrews opted, instead, to work in a representational style, drawing inspiration from realist painters, the jazz clubs he frequented, and memories of his rural youth. Andrews once reported that, as a student, he had been rejected for every show, organization, or club in the Art Institute of Chicago. He even was rejected for the veterans’ exhibition when the only requirement to exhibit was to be a veteran. Andrews supported himself during his these years by illustrating advertisements for local theater companies and album covers. 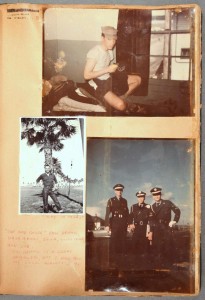 He married photographer Mary Ellen Smith in 1957 and earned his BFA in 1958, yet never winning the favor of his professors or peers. He once wrote, “I . . . was determined to remain true to what I felt an artist should be, and that was a human being who happened to paint, sculpt, or etch, never giving up his or her right to remain himself. Needless to say, in the eyes of the school, I was a total failure, and I found that very easy to live with. In fact, I gained a certain amount of strength from the academics’ utter dislike of what I chose to do, which was natural-looking black and white people from all regions of America.” 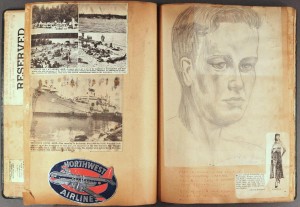 The Andrews moved to New York following his graduation. Their first son, Christopher, was born a week after arriving in their new city. The couple eventually had two more children—another son, Thomas, and a daughter, Julia. Smith took an office job to support the family, and Andrews stayed home to paint and raise their children. Andrews and Smith divorced in 1976. Ten years later in 1986, he married artist Nene Humphrey.

After joining the faculty of Queens College in New York, 1969, Andrews began writing art criticism, commencing with a 1970 essay for the New York Times titled “On Understanding Black Art.” In addition, he launched art programs in prisons and led a volunteer program at the Society for Prevention of Cruelty to Children. From 1982 to 1984, he served as visual arts director for the National Endowment for the Arts (NEA) where he established additional outreach programs. Andrews realized he had a knack for arts administration but found that the work distracted him from his true mission. “I hated to leave the NEA,” Andrews said, “but I couldn’t stay with that job and be a painter, too.” 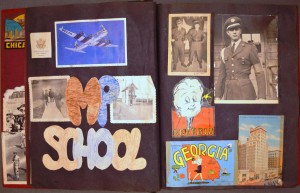 Throughout the 1980s and 1990s, Andrews drew increased recognition for his creative work, with his paintings and collages appearing in the collections of more than twenty museums across the United States. Additionally, Andrews established the Benny Andrews Foundation to assist young African American artists and institutions dedicated to African American art. The Foundation secures works by prominent African American artists for smaller museums that cannot afford them. It also works to teach young artists how to prepare portfolios, conduct interviews, and otherwise navigate the art world. 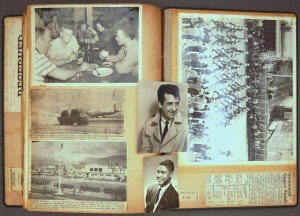 By refusing to yield to artistic trends, Andrews carved a long and respected career as a painter and collage artist. He remains well-known for his work as an activist, educator, and philanthropist, paving the way for young individuals to follow in his footsteps.

In total, there are three scrapbooks that form part of the Benny Andrews papers at Emory’s Manuscript, Archives, and Rare Book Library. Emory also holds the papers of his brother, novelist Raymond Andrews, and of their mother, Viola Perryman Andrews.

In 2006, Benny Andrews died of cancer. He and Nene had been married twenty years. After his death, the Archive of the Andrews Humphrey Family Foundation was established primarily to create and maintain an archival resource on the art of Benny Andrews. Currently, the Foundation is working with the MacDowell Colony in Peterborough, New Hampshire to establish the Benny Andrews Fellowship. The aim of this fellowship is to advance the diversity of the MacDowell Residency program.