While MARBL holds a significant amount of letters to and from soldiers in the Civil War between families and friends, it is also important to note the epistolary conversations that happened between those who stayed at home. A collection of letters in the Bomar Family Papers here in MARBL is a peek inside life for young women during a war that came so close to home.

Amaryllis Bomar was the daughter of Dr. Benjamin F. and Sarah E. Lumpkin Hayne Bomar. Dr. Bomar settled his family in Atlanta when Amaryllis was very young. Upon arriving in Atlanta, Bomar ceased practicing medicine and opened up a general store on Whitehall Street. He was elected a member of the first Atlanta City Council in 1848 and became the city's second mayor in 1849. He also started the Atlanta Intelligencer, one of the city's earliest newspapers.

Amaryllis was a teenager during the Civil War, and most of the letters in the Bomar Family Papers are addressed to her. Some of the most interesting, which tell of life as a young woman in Atlanta, come from her friend Imogene Hoyle. The Hoyles were another prominent family in the city at this time. Both families refugeed to towns outside of Atlanta during 1864 and some of the letters document this period.

You can really see the difference a year makes when you view letters from the summer of 1863 alongside those from the fall of 1864. Imogene writes in June, 1863 that “Atlanta is very dull now.” She also mentions a young man who “inquired very particularly about [Amaryllis].” This letter is lively and light and talks about the goings on in the city and how “there's plenty of gossip going around.” 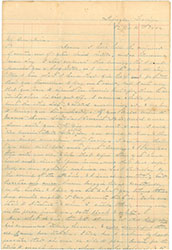 The mood changes significantly, however, by letters from the summer and fall of 1864. In a letter dated June 28, 1864, Imogene talks about the family's difficult flight from Atlanta. “I had a hard time getting out of Atlanta and had almost come to the conclusion that the Yankees would get me in spite of every thing.” Her family ended up refugeeing in Sandersville, GA and a number of her following letters are sent from there.

There are definite pangs of homesickness in the letters, most significantly in one from November 16, 1864 when Imogene writes, while discussing a newly acquired piano, “Our favorite song is 'Take Me Back to Atlanta' and when I strike that, every one in the place joins in, both black and white. Ama, what do you think!” She also talks about teaching someone to play the piano, most specifially “'Dixie' for the troops to march home by, when peace is declared.”

The letters continue on into 1865 as the girls exchange news about wounded soldiers and where their loved ones have been stationed. They continue, though, to retain a somewhat lighthearted air as love interests and gossip are discussed as well.

Though the collection of letters is small (there are only ten written by Imogene to Amaryllis) they span a significant time period for Atlanta. Their importance, as well, is in the fascinating way they offer a glance inside life for young women in the South during the incredible upheaval of the Civil War.