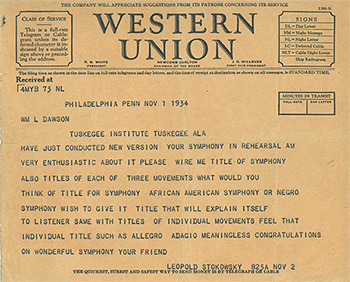 Periodically, the MARBL blog will feature updates and insights from visiting researchers working within MARBL's collections. Gwynne Brown, Assistant Professor of Music History and Music Theory at the University of Puget Sound, spent a month with us in MARBL this summer delving into the papers of composer William Levi Dawson.

When I first visited MARBL in 2010, I wanted to learn how William Levi Dawson's approach to the arrangement and performance of African American folk songs differed from that of his composer-arranger-conductor contemporaries such as Hall Johnson, Eva Jessye, and Jester Hairston. The Dawson Collection at MARBL proved so rich, and its subject so remarkable, that by the end of my week of research I envisioned writing a book solely on Dawson. This past summer, with support from my home institution, the University of Puget Sound, I returned for four weeks of research at MARBL. My findings enabled me to complete an article that will appear in the November 2012 issue of the Journal of the Society for American Music, as well as a book proposal on Dawson now under review by a major university press.

The Dawson Collection's abundant materials are organized in such a way that they are not only easy to use, but almost novelistic in the stories they tell. The story that first gripped my attention in 2010 was that of Dawson's splendidly effective Negro Folk Symphony, which debuted in 1934 in four performances by the Philadelphia Orchestra under the baton of Leopold Stokowsky. The materials in the Collection vividly convey the excitement generated by the performances, one of which reached a nationwide audience via radio broadcast. Given the current obscurity of Dawson's magnum opus, I was amazed to read accounts of the tumultuous applause that interrupted the symphony after its second movement (a concert hall faux pas then as now) at each of the four performances, the telegrams and letters that Dawson received from around the country after the concerts, and the approbation of critics ranging from Alain Locke to Olin Downes. The question that all of this raised in my mind provides the title of my forthcoming article in JSAM: “Whatever Happened to William Dawson's Negro Folk Symphony?“

I would like to express my gratitude to the staff at MARBL, to the MARBL fellowship committee for supporting me with a Cannon Research Fellowship in 2010, and to Mr. and Mrs. Randolph L. Milton, Jr. for donating the materials that comprise the William Levi Dawson Collection.