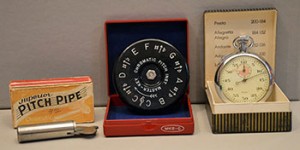 Pitch Pipes and a Metronome, circa 1930s

The metronome, pitch pipe, and baton are artifacts from William Levi Dawson’s tenure as conductor for the Tuskegee Institute (now Tuskegee University) choir. Dawson began as a student at Tuskegee at the age of thirteen and was a member of the band and choir. In the fall of 1930, he was invited to return to Tuskegee to organize and conduct its School of Music which included the role of choir conductor. In 1946, under Dawson’s leadership, the choir became the first African American performing organization to appear at Constitution Hall in Washington, DC. Other accolades under his tenure included the choir performing at the opening of the Radio City Music Hall in New York in 1932 and singing for both Herbert Hoover and Franklin D. Roosevelt. In 1956, Dawson retired from Tuskegee ending 25 years of leadership in the music department.