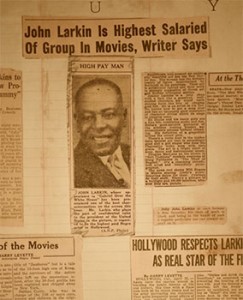 Newspaper clippings in the Larkin scrapbook

John Larkin Smith (1882-1936) was an actor and vaudeville performer born in Norfolk, Virginia. Known most often by his stage name “Jolly John Larkin,” he was also billed as “The Rajah of Mirth” and “The Funniest Colored Comedian in the World.” He led the Dandy Dixie Minstrels in the 1920s and later transitioned to a successful career in film. In the 1930s, Larkin performed in several films including Smart Money, Sporting Blood, Alexander Hamilton, and MGM’s The Great Ziegfeld. Before his death in 1936, Larkin became the highest paid African-American actor in Hollywood. Emory has in its collection a scrapbook relating to Jolly John Larkin from ca. 1914-1932. The scrapbook includes movie reviews, programs, advertisements, newspaper clippings, and announcements, as well as broadsides and other ephemera relating to Larkin’s vaudeville performances including those with the Dandy Dixie Minstrels and his career in film. 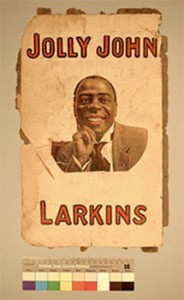 The badly chipping inside front cover

Like many of the scrapbooks being preserved under the SAT grant project, the pages of the Larkin scrapbook are in poor condition. In some cases pages are crumbling at the edges, ephemera that have been folded to fit within the scrapbook are often splitting at the folds, and many if not all of the pages are discolored. One of the goals of the SAT grant project is to preserve the scrapbook experience for future viewers, so every effort is made to avoid changing the layout or format of each scrapbook. It was clear that with pages in this condition, any sort of direct handling would cause further damage. For this reason, the Larkin scrapbook was identified as a good candidate for polyester encapsulation, a process in which the pages are separated into individual leaves and protected in an envelope of clear sheets of polyester (ex., Mylar).

One of the benefits of polyester encapsulation is that it allows for an object to be sealed and protected without introducing heat or moisture to the object. In contrast, lamination of an object involves the application of an adhesive to the surface of the object and heat is often applied to activate the adhesive and seal the casing. In the encapsulation process, the polyester envelopes can be secured at the edges using one of several methods including sewing or with adhesive, but sealing the edges with an ultrasonic polyester welder allows the conservator to create a tight seal in very close proximity to the edge of the object, in fact within millimeters, and to do so without adding any bulk to the edge of the pages which might create a challenge when the book is reformatted into a new cover. Another benefit is that the process is rather immediate with no drying time as well as being reversible, unlike lamination. 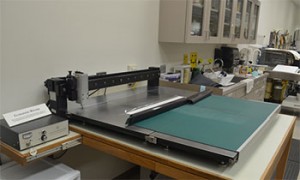 Ultrasonic welding of plastics originated in the 1960s and has many industrial applications. Bill Minter, a conservator in private practice, developed the polyester encapsulation system we use at Emory. The ultrasonic welder utilizes high-frequency acoustic vibrations to melt the thin sheets of plastic together without heat. 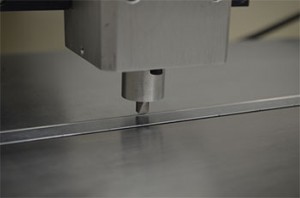 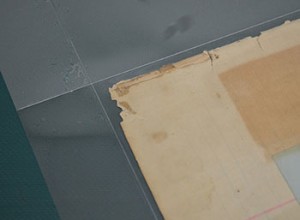 Two sides welded but not yet trimmed

In polyester encapsulation, once each folio is separated into individual leaves, the pages are carefully measured in the flattest format possible. Thin sheets of polyester (three to five mil thick – a mil is a thousandth of an inch) are cut to just oversize of the object so that the edges can be welded and any excess is trimmed to leave about a 1/8-inch border. A wider margin is left on the spine edge to allow for a post binding. 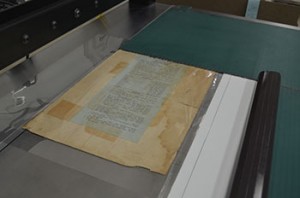 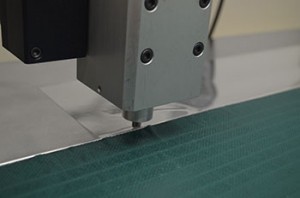 Magnetic mats secure the object and help force air from between the sheets of polyester, which aids in creating an envelope with less bulk. Once the object is in place on the bed of the welder, the welding head is operated by foot pedal and allows for a straight weld along each edge of the object. 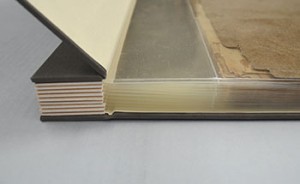 At completion of welding each side, the edges are trimmed, fore edge corners are rounded, covers are created, holes are drilled, and posts are inserted to finish the newly formatted scrapbook, which will be housed in a custom manufactured archival box. John Larkin’s protectively enclosed scrapbook will now be available for researchers and other patrons. 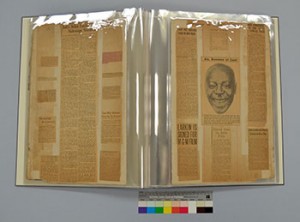