William H. Scott (1848-1910) was a Baptist minister and political activist. Though he was born a slave in Virginia, he escaped at age eight and joined the Union Army’s 12th Massachusetts Infantry Regiment. Following the Civil War, Scott studied at Howard University Law School. He taught newly freed slaves in Virginia until he was forced to flee the state as a result of racist intimidation. He then enrolled at Wayland Seminary and was ordained a Baptist minister in 1880. He served churches in Washington, D.C., Virginia, and Massachusetts. In 1892, he moved to Boston to serve as pastor of Calvary Baptist Church. Scott was an advocate for African American rights. He founded the Massachusetts Racial Protective Association in March 1896; he was one of 29 original members of the Niagara Movement; and he helped organize the National Independent Political League in 1908. 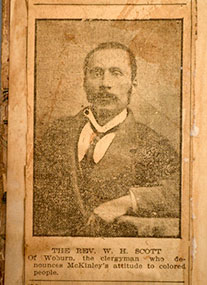 William H. Scott, Jr. (1887-1976) was the son of William H. Scott and Laura Ann Fields Scott. He followed in his father’s footsteps and joined the United States Army. Scott also followed his father’s interest in politics and was active in the National Equal Rights League. He wrote for radical periodicals, including The Clarion and The New Negro. Scott married Mary E. Robinson in 1907 and they had two children: William J. Scott and Henry Thompson Scott. In 1917 Scott enlisted in the Army again. He was commissioned Second Lieutenant in the Officers’ Reserve Corps on January 15, 1919. He spent the same year attending the Northeastern College of Law. He eventually spent most of his working life employed by the Monsanto Chemical Company in Everett, Massachusetts. While employed for Monsanto, Scott also did freelance work for the Baltimore Afro-American as a photographer. 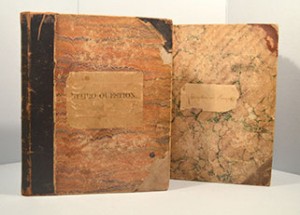 Two of the Scott family scrapbooks that were treated

Emory has in its collection the papers of the William H. Scott family from 1848-1982. The papers of William H. Scott, Sr. include correspondence, personal papers, writings, scrapbooks, photographs, and printed material that document his religious activity and political activism including work with the Anti-Imperialist League, the National Independent Political League, and the Negro Baptist Ministers Conference. The papers of William H. Scott, Jr. include correspondence, personal papers, writings, photographs, subject files, and printed material. Much of his correspondence consists of letters exchanged with his wife while he was in service and details black life in the U.S. Army during the Jim Crow era.

Due to the condition of the Scott scrapbooks, the access to researchers and the public has been limited, or in some cases completely restricted. Some of the other types of materials from the Scott collection have undergone conservation treatments in the past and at times have been included in exhibitions. However, until this time, none of the Scott scrapbooks had been treated. For this reason, they were included among other scrapbooks being preserved under the Save America’s Treasures (SAT) grant project.

Some of the scrapbook bindings were relatively intact while others were in very poor condition with issues such as very brittle pages, detached newspaper articles, water and mold damage, staining or discoloration from acidic substrate material, and some were in need of spine repairs.

At times the repairs involved a bit of detective work in locating the original site of loose fragments and reattaching them. Clues were found in paper type and color, text or image remnants, or even in the irregular, puzzle-like edges of the missing pieces. Often, the readability of information was improved with patience and perseverance as the fragments were carefully returned to their original places.

Before and after images of vacuuming 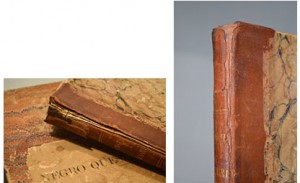 Before and after images of a spine repair

One of the scrapbooks was in need of a spine repair. The text block was relatively secure within the binding, so the spine simply needed to be mended. Prior to any mending, all the leather surfaces of the binding were coated with Cellugel. Cellugel, essentially a derivative of cellulose suspended in isopropyl alcohol, penetrates the surface of leather to consolidate and protect it. It provides a thin film coating which protects the leather from potentially harmful environmental conditions, such as moisture or handling, but does not darken or discolor aged leather. Cellugel also dries quickly and will not stain other materials with which it comes in contact. It was necessary to coat the leather prior to any mending so that the moisture of the adhesives used in the mending process did not do further damage to the leather. Old leather can turn much darker and burnt-looking if in contact with moisture. 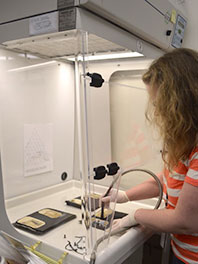 Mold was also discovered among the pages of several of the Scott scrapbooks and required careful removal with a HEPA vacuum while working in a fume hood. The Emory conservation lab is equipped with a Misonix Aura 250 ductless fume hood and a Nilfisk GS80 HEPA vacuum. The fume hood is a self-contained, filtered enclosure that removes hazardous fumes, vapors, and small particles such as mold spores. When mold is discovered in a book and appears to no longer be active, the covers and each of the pages are vacuumed to remove the mold spores. The vacuum is outfitted with an array of small attachments for various applications along with controls that allow the user to adjust the level of suction so as not to inflict further damage on an already fragile book or document. In the case of particularly fragile items such as brittle newspaper clippings, a fine-meshed plastic screen can be placed over the surface of the item being vacuumed so that only fine particles such as dust or mold spores are lifted from the surface.

Before and after images of vacuuming

In some cases staining remains, though most of the mold spores have been removed.

More before and after images of removing dirt and mold spores 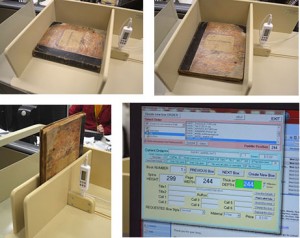 Using the CMI system to digitally record the precise height, width, and depth of a book directly into the order form for a custom-manufactured box

Once cleaning and various repairs were completed, the Scott scrapbooks were measured for custom-fitting, archival boxes. The majority of our boxes are made in house, but Custom Manufacturing Incorporated (CMI) in Hammondsport, New York fabricates the boxes we use for the SAT grant project. CMI provides a system for measuring the precise height, width, and depth of the item to be boxed, which connects via USB cable to a desktop PC. Measurements are taken and directly entered into CMI’s digital order form. CMI then manufactures each box, ships them flat, and the boxes are assembled upon delivery in the conservation lab.

One of the Scott scrapbooks housed in a custom-fitted, archival box

Each of the scrapbooks selected to receive treatment in the SAT grant project will also be photographed and digitized, and then returned to MARBL rehoused in the protective boxes. This achieves the main goal of our grant, which is to make scrapbooks accessible to researchers and patrons, both physically and as digital files.