William G. Porter was the head of consignment shipping company, William G. Porter and Company, out of Apalachicola, Florida, and the collection contains the business records of the company from 1831 through the 1870s as well as letters and documents of the family during that time and through 1936. This collection has incredible research potential, covering not only the antebellum shipping trade, but also relations between cotton farmers and shippers, family matters, and life in the antebellum south. 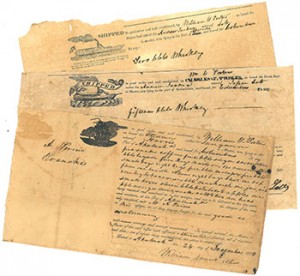 Bills of Landing from the Porter Family Papers

The collection contains research material on shipping of various materials, not only cotton, but also general merchandise, rum and sugar from Havana, textiles, and food staples. Information on pricing can be gleaned from the printed stationary of shipping companies from both sides of the Atlantic, and the names and routes of steamships, barks, and brigates are easily accessible. Letters between the family discuss daily life as well as the celebrations of marriages and births and the announcements of death.

William G. Porter was the eldest son of Reverend Thomas Porter and Mary Gibbs. The family hailed from Bucks County, Pennsylvania, but Porter founded the company in Apalachicola with two brothers, Charles and Joseph who ran the merchandise firm, J & C Lawton. Initially, William would ship and sell merchandise that the Lawton’s provided, selling items to people up and down the Apalachicola river which was the primary shipping route before the Mississippi made New Orleans a primary shipping hub. William brought in his cousins, John and James Ruan, as well as his brother, Richard. Later, William added his brother-in-law, Samuel Benezet. William moved to Philadelphia, Pennsylvania after his marriage to Catharine Benezet, and ran the business from there, an advantageous circumstance once the U. S. Civil War broke out. By the 1850s, William G. Porter and Company was working primarily as a commission merchants in cotton, grading and selling cotton from Alabama and Georgia to ports in New York, Boston, and Liverpool. 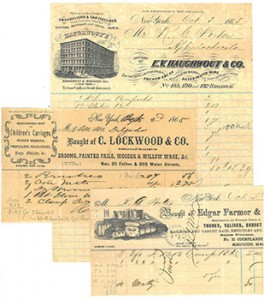 Receipts from the Porter Family Papers

The business records consist of accounting records that include what you would normally find in any business records: bills, account ledgers, insurance records, correspondence, but there are also records specific not only to the time, but also to the shipping business including freight lists and ships manifests as well as bills lading that are contracts that cover specific items on a hired ship. Many bills are strips of paper from farmers and locals asking for specific items including flour and other staples, but there are letters asking for wagons for a child’s gift or shoes and clothing for slaves. One letter requests a fashionable hat with a ribbon. The company also acted as a bank agent. At that time, banks rarely had many local branches and other companies were used as branches. William Porter and Company allowed people to conduct business, withdraw and deposit money, and pay bills. The company also worked as a collections agent for Bank of Brunswick. The diversity of business allowed the company to stay afloat in the face of bank crises, the Civil War, and other issues that closed many other enterprises.

The family letters cover topics such as domestic matters, daily events, and family news, but there are also letters between the brothers and cousins dealing with the work of William G. Porter and Company. There are also records that document the family’s expenses, including receipts and invoices for personal purchases such as groceries and luxuries as well medical and dental bills. The family also collected devotionals, drawings, historical writings, and there is a series of hunting journals that document the wildlife and style of hunting from nineteenth century Apalachicola.

William Porter not only headed the shipping company run by his family but was also the Vice Consul to Belgium, appointed by the King of Belgium. The collection contains printed material documenting the social customs of the country as well as guidelines on the Vice Consul’s work.

This collection covers many topics and will be handy for research in many fields. Obviously, there is data on the shipping ports for merchandise including cotton, rum, tobacco, and other general commodities as well as pricing as documented on shipping company letterhead. Included are common shipping contracts such as agreements, bills of lading, protest and attestations, and charter parties. Also of interest are the duties the company took as bank agent and collections agent, illustrating the diversity of business in antebellum Apalachicola and the means the company took to stay in business. Many people will be interested in the general family correspondence and the family history, but the hunting journals, family bills, and estate records can fill out the story of everyday life in nineteenth century Florida. This collection gives an important view of not only daily life, but also the business life in the South.