On a hot August day during my first semester at Emory College in 2012 I walked to my advisor’s office that was on the campus quadrangle. Having been assigned my advisor by the Emory Pre-Major Advising Connections at Emory (PACE) program, her job was to recommend the classes I should take during my first semester at Emory. I walked with my head high across the quad, as my brown skin glistened in the sun.  As I walked, I looked at the trees that lined the space, and at the white administration building at the head of the quad; I was instantly reminded of a plantation. Attempting to forget America’s racist past and my ancestors’ realities within it, I walked into a building to meet my advisor for the first time.

Once I entered into her office I said, “Hello”. She looked at me coldly and said “hello” back. After making small talk I told her that I wanted to take a Poetry course in the English department and then she looked alarmed. “Well, I don’t think you should take the Poetry course,” she said. Confused, I then explained that I had already fulfilled the prerequisite English 101 requirement by making a 4 out of a 5 on my Advanced Placement (AP) English Language exam in the eleventh grade in high school, thus, I was exempt from taking English 101 at Emory and was qualified to take the Poetry course in my first semester of college. She replied, “The Poetry courses here [at Emory] are difficult and given your SAT scores I don’t think you would do well in the Poetry course during your first semester at Emory.” I couldn’t believe that my exceptional score of a 4 on the AP exam was not enough for her to believe I could excel in a challenging course in Emory’s English department. But taking her word for it, I enrolled in the English 101 course and I aced it. Yet I fell asleep in each lecture because I was bored; I had learned English 101 in high school. After that meeting I never asked her for academic advice again, because I felt as though she judged my intellectual capabilities based off of the color of my skin. From that moment on, the campus seemed cold to me, even when the August sun shined. 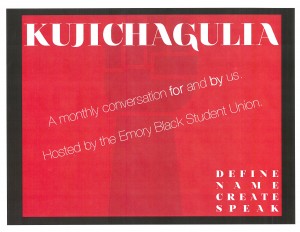 After that encounter with my former advisor I began to ask myself, what does it mean to be Black on Emory’s campus? The cold racial tension on Emory’s campus in 2013 caused me to ponder this question more. My new advisor encouraged me to attempt to answer these difficult questions about race relations on Emory’s campus more formally through research and writing. I love being Black, I thought to myself, but how can I change Emory University to improve the experiences Black students have at this institution? As I researched, hoping to find answers to this question, the Emory Black Student Union (EBSU) was established, which was a victory for the recently afflicted Black community at Emory.[1] Subsequently being drawn to the concept of safe spaces, I began to research the history of safe spaces for Black students at Emory. I then learned that the first safe space for Black students at Emory University was established in 1969 and it was called the Black Student Alliance (BSA) House. 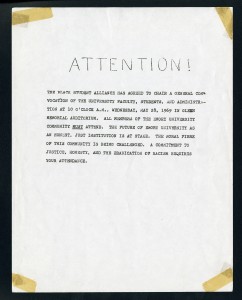 The Black Student Alliance held a series of protests and events in 1969 to fight racial injustice on campus. Image from the Emory University Desegregation Collection.

Captivated by that historic moment, I made an appointment to view the documents concerning the 1969 BSA House in the Emory University Desegregation Collection in the archives at Emory University. It was my first time attempting to use the Rose Library Reading Room, thus, I stumbled through making an appointment to view the items. But I succeeded, and I waited for the day of my appointment to arrive. When the day came to research I walked into the Reading Room and was instructed to place my book bag in a locker. I sat down and received a box with folders in it. I quickly delved into the box, pulling each folder out and then looking through each of them. I couldn’t believe what I saw: photographs of Black students protesting on Emory’s campus in 1969. I immediately had a flashback of the Black student protests that had occurred just months before on campus. I saw photographs of Black students tell their experiences they had that were marked by prejudice to White administrators who looked at them coldly. I then remembered the cold look I received in my former advisor’s office when I was a first-year student. I learned that in 1969, the Black Student Alliance presented the Emory Manifesto: a list of nine demands to the University administrators. The things they demanded were similar to what Black students demanded in 2015 in a list of thirteen demands. I realized then that Black students decades before I was a student at Emory had wrestled with the reality of being Black at an institution situated in the South, too. This motivated me to discuss the current experiences of Black students at Emory University in my Interdisciplinary Studies Senior Research Project, so that decades from now students can read with awe the pursuit of justice that we, too, made.

With a strong desire to continue to make connections between Black students of the past and Black students of the present, I interned in the Emory Black Student Union as its Historian during my senior year in college, to record the historic moments Black students had at Emory. Gratefully, I was able to work with John Bence, the Emory University archivist, to place the history of the EBSU into the Emory University Archives. The photographs, documents, and items that tell this history are in the Emory Black Student Union collection and it is available to be viewed by the public in the Stuart A. Rose library’s Reading Room. Adding to the physical space that Black students have on Emory’s campus is now an archival space. May the bold activist leadership of students and staff recorded in the EBSU collection inspire you to advocate in your communities for justice and equity for all persons.