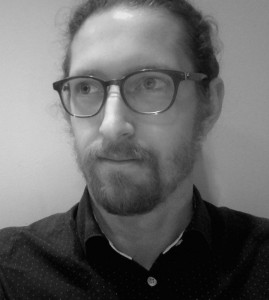 The Rose Library’s recent acquisition of an important collection of Jack Spicer material, which I was able to look through during my residency centered on studying the work of Ted Berrigan, led me back to an inherent echo I’ve felt between the two poets’ writing. The aesthetic and geographic differences between the work of Spicer and Berrigan has rarely placed them in the same critical conversation. Spicer’s critical myth-churning occultism, deeply embedded in the early gay liberation movement and anarchist lineages emerging from the Berkeley Renaissance of the late ‘40s, hardly seems to echo in Berrigan’s sonorous Blonde on Blonde, Pop Art-edged iteration of the New York School. After all, it was the deaths of Frank O’Hara in 1966 and Jack Kerouac in 1969, not Spicer’s in 1965, that triggered Berrigan’s elegiac impulse in poems such as “Frank O’Hara” and “Telegram, to Jack Kerouac.” Likewise, their popular personas – Spicer as the irascible queer localist of North Beach, Berrigan as the swaggering, boisterous leader of the Lower East Side – seem to put them at odds in the established coterie narratives of postwar American poetry. 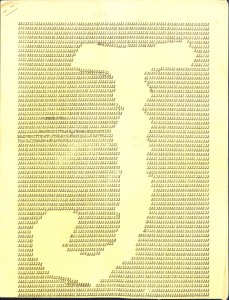 However, the aesthetic bullet points and teachable narratives that distance Spicerand Berrigan are precariously thin. It’s difficult to imagine Berrigan’s iconic sequence The Sonnets not being linked to Spicer’s serial poetics. In particular, the poems in Spicer’s Language share a kind of glowing disjunctive formalism with the reverberating uncanniness of Berrigan’s serially appropriated voices, what he calls his “rough magic.” Alice Notley says as much in the introduction to The Collected Poems of Ted Berrigan, noting that “he agreed with Jack Spicer’s notion of the other voice that dictates one’s poems, and his poems have a ‘dictated’ quality, even the ones that are made from other people’s words.” Furthermore, the two shared an array of personal and artistic devotions that appear throughout their work, including the epistolary gesture, pulp genres, mistranslation, sports, themes of the outlaw American west, and a studied yet brilliantly mischievous penchant for literary hi-jinx and Rimbaudian pronouncements. Both poets’ presence was laced with a contagious commitment to their art that garnered them a fiercely loyal constellation of fellow poets, including friends like Larry Fagin, Harris Schiff, and John Wieners who moved between Spicer’s and Berrigan’s circles. Funny and ardent, and sharing a bent, loquacious wit, Spicer’s and Berrigan’s transcribed workshops and lectures have been treated as primary documents of their eras. 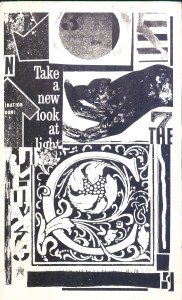 These similarities also resonate in the magazines they edited; Spicer’s J (which ran for 8 issues from 1959-61) and Berrigan’s C: A Journal of Poetry (which ran for 13 issues from 1963-67). As far as I can tell, the Rose Library is the only special collections library to house the full runs of both magazines, a small portion of the vast Danowski Poetry Library at Emory. Aside from the single-letter names of the magazines (itself a kind of pleasurable uncanniness), both mimeo magazines emerged against institutions as acts of anti-professional resistance to established publishing models and ethics. Spicer gathered the first five issues of J, all in 1959, from the work of his friends, collecting poems left in a box at The Place, a North Beach bar whose address appears on the cover amid a sprawling pattern of ‘J’s. Started as a fiercely localist rebuke of the little magazines of the Beats and New York School, particularly Beatitude and Locus Solus, Spicer assembled the magazine quickly and cheaply with beautiful hand-painted covers. It was an opportunity to re-present a community’s work back to itself, a means of initiating communication and participation among one’s shared sources. Similarly, C emerged directly from The Censored Review, a one-shot mimeo magazine produced in reaction to the censoring of Berrigan’s poems by Columbia University administrators in The Columbia Review, for which Ron Padgett was an editor. Berrigan adopted the legal-size mimeo printing model of The Censored Review for C, as he explains in “Some Notes about ‘C’,” for its cheapness and because the size of the magazine “would infuriate collectors and dealers, but please Wallace Stevens who said he like to see a lot of space on pages.” Not only was the size of the magazine intentionally unmanageable, its editorial policy refused to be pinned down. The apparently easy-going announcement, “C will print print anything the editor likes,” appears at the beginning of each issue.

J and C never shared any contributors, but both were started with the intention of featuring an intimate, aesthetically linked group of friends and artists. For both Spicer and Berrigan, the process of magazine publishing was a reciprocal, anti-gatekeeping act of love and defiance. Spicer’s Book of Magazine Verse, composed solely of poems written for and rejected by major and obscure publications, and Berrigan’s The Sonnets, arranged from a range of sources including lines from friends’ poems that appear in the first few issues of C, both exemplify how these poets saw editorial work – or a refusal of editing as professionalization – intersecting with and amplifying their aesthetic choices. As Berrigan said about the first issue of C, the intent was “to reflect the SIMILARITY of the poetry, since I felt the differences to be obvious, and the NEWNESS of such a point of view as we (I) had.” While Spicer might have articulated it in different terms, his editing of J shares a commitment to establishing a critical, energetic collectivity of voices. Contributors to J include Bay Area poets such as Spicer, Robert Duncan, Robin Blaser, George Stanley, James Alexander, Richard Brautigan, and Ebbe Borregaard; Joanne Kyger, a future friend of Berrigan’s; and even Don Allen, who would later reissue Berrigan’s The Sonnets with Grove Press in 1967. In addition to Berrigan’s own poems in C, including 42 sonnets from the originally published sequence of 66, we also find poems by friends like Padgett, Dick Gallup, Joe Ceravolo, and Tom Veitch; a litany of established New York poets like O’Hara, John Ashbery, and James Schuyler; and others poets of Berrigan’s generation like Wieners and Harry Fainlight. Both magazines share a dismal lack of female voices, but it’s interesting to note the range of queer male poets included, especially in C. 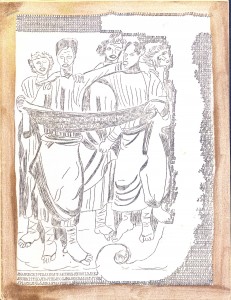 While J doesn’t approach the unwieldly physical size of C, its assemblage of poems, genre-bending prose works, plays, letters, pseudonyms, and real and faux poetics statements is a West Coast precedent for the boisterous range of works Berrigan would gather into his magazine only a few years later. With drawings and symbols appearing within poems and its intentionally amateur production, J actually more closely resembles Ed Sanders’s mimeo Fuck You: A Magazine of the Arts, though without the rock’n’roll outlandishness of The Fugs front man’s publication. The covers of J and C, however, show a kindred approach to the little magazine as an intimate, artful (and sometimes artless) object of aesthetic communication. Both Berrigan and Spicer counted painters among their close friends and the gorgeous covers of J designed by Fran Herndon and Russell FitzGerald, though not as aesthetically elaborate as Joe Brainard’s covers of C, highlight a continuity of collaborations between poets and painters. There’s also a resonance in the magazines’ centering of queer male writers, as exemplified in the covers of two particular issues, the gold-trimmed cover of J issue 5 designed by Herndon and C issue 4 designed by Warhol. In the former, five Greco-Roman male figures stand huddled together with their arms around one another, including one hand in the center grabbing a toga-clad crotch. 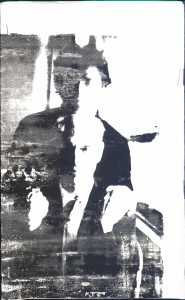 In the latter, a Warhol silkscreen shows a photograph of the young poet Gerard Malanga standing behind Edwin Denby, his arms on the elder poet’s shoulders as if linking two generations of gay artists. The back cover, which garnered the issue some controversy in the New York art world, shows Malanga and Denby kissing. While Duncan’s partner Jess Collins only contributes writing to J rather than his visual art or illustrations, it’s not hard to imagine Jess as the Bay Area iteration of Brainard. In fact, J issue 5 includes a kind of absurdist myth- and linguistics-inspired comic drawn by Spicer, “The Poet’s Corner,” an idiosyncratic precedent for Brainard’s own two-issue run of C Comics. 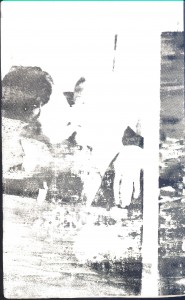 It’s unclear whether Spicer ever read Berrigan’s poems, as Spicer died less than a year after The Sonnets was published, though they did share the same space at the Berkeley Poetry Conference in 1965 (they did not meet) after which Duncan wrote a poem in homage to Berrigan, “At the Poetry Conference: Berkeley After the New York Style.” Berrigan, though, would read and reread Spicer throughout his life – his 1980 journal, part of the Ted Berrigan collection in the Rose Library, includes a transcribed quote from Spicer’s Admonitions (1957): “The trick naturally is what Duncan learned years ago and tried to teach us – not to search for the perfect poem but to let your way of writing of the moment go along its own paths, explore and retreat but never be fully realized (confined) within the boundaries of one poem.” If nothing else, Spicer’s and Berrigan’s poems share an enigmatic, devotional, thickly attentive zeal. Just as in the magazines they published, they chose similar ways to refuse to be boring.