In December 2018, Scott McKendry conducted research at Emory’s Rose Library as a recipient of our Short Term Fellowship Program. Mr. McKendry is a PhD candidate at Queen’s University Belfast.

Poets love gossip. In fact, one might argue that poetry itself is a form of highly-tuned gossip. Poets tells the not quite truth about the not quite past and plain lies about the future; and literary critics are guiltier still, in their gossip-mongering around gossip.

Though the noun ‘gossip’ comes from the Anglo-Saxon ‘godsibb’ (‘god-sibling’, godparent or sponsor), by the fourteenth century it had come to mean an ‘acquaintance’, ‘friend’, or ‘neighbour’: any close outsider who might announce the birth of a child or some other family news. As the centuries rolled by, ‘gossip’ – disembodied and imbued with negative connotation – came to mean what we now know it as, that is, ‘familiar or idle talk’ (OED). This etymology, I contend, suits poetry down to the ground. The lyric poem is at once familiar, but never quite familial – always outside the tent, an artful deceiver, a ‘frenemy’, as Millennials might have it.

I visited Emory University’s Rose Library in early December 2018 for two reasons: (a) to sniff around for gossip about Irish poets and critics, and (b) to see what I could find on the use of Hiberno-English dialect amongst the Ciaran Carson Papers. My main interest regarding gossip was the correspondence between literary figures during a culture war which consumed the litero-critical sphere of the Irish academy in the 1980s and ’90s. The two factions in this foray were (what I call) the Ulster Postcolonialists and the Revisionists. Because these debates were concurrent with the Ulster ‘Troubles’, the two sides – although in fact comprising a broad range of political positions – were quickly caricatured (by both opposing factions and observers) as paralleling the long-established Irish political poles of British Unionism and Irish Republicanism. The Revisionists viewed Ulster Postcolonialism’s nationalistic historiography as one which – fetishizing Ireland – lent credibility to the armed campaign of the Provisional IRA; in turn, the Ulster Postcolonialists saw the Revisionists, in their avowal of cosmopolitanism, as Anglophilic apologists for the British Empire embroiled in denialism and ahistoricism regarding the socio-political realities of Northern Ireland. Despite these characterisations, both factions claimed their goal was to transcend the sectarian dichotomy of ‘Orange and Green’. The main figures of Revisionism were Edna Longley and Gerry Dawe, whilst Postcolonialism – centred around The Field Day Theatre Company – found its critical protagonists in Seamus Deane and Tom Paulin.

When I began to look through the archives at Emory, I was struck by the volume of postcards and letters between literary figures. Their correspondence is often quite lengthy and eloquent. As well as the toing and froing of ideas, it’s easy to discern where close relationships developed from mere acquaintance – where references were written for academic posts and various other instances of benign nepotism. Here a record emerges on paper what today we’d call a ‘professional network’. There are many in-jokes, some of which wouldn’t hold to contemporary norms of political correctness.

Embarking on my hunt for gossip, my instincts took me to Tom Paulin’s correspondence from the 1980s (MSS 880, Subseries 1.2). Here I was hoping to find reactions to Edna Longley’s erudite and witty journal piece, ‘Poetry and Politics in Northern Ireland’ (Crane Bag, 1985), where she lambasts a perceived new form of cultural nationalism in the work of literary figures associated with Field Day. As the piece accuses Ulster Postcolonialists Deane and Paulin of a nascent neo-fascism, it’s understandable that they may have taken personal offence. Furthermore, as a follow-up to her deeply unfavourable review of his collection Liberty Tree (1983) in Fortnight, Longley mercilessly attacks Paulin’s poetry in her journal piece, characterising it as philosophically obtuse and derivative. Despite this ongoing critical row however, I found no trace of animosity in Longley’s correspondence to Paulin in the 1980s. (It’s possible that any letters of a belligerent nature were retained by both parties where they handed over material to the Rose Library). In a letter following a conference in the summer of 1985, Longley compliments Paulin and goes on to write about her upcoming holiday to County Mayo. She also reassures him regarding some of the conference’s more heated debates. ‘Thank you so much again for your double contribution,’ she writes,

your lecture and reading certainly stimulated and excited their audience. A few people were sorry not to get the chance to debate with you on a more conversational level […]  Don’t ever think that intellectual disagreements carry over into the personal sphere. 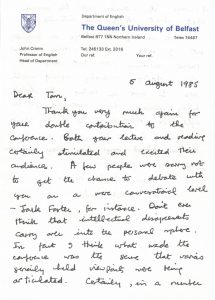 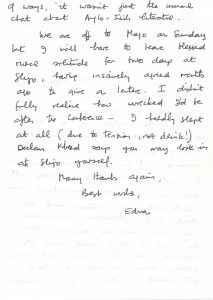 We can assume from this letter that in previous correspondence to Longley (which the Rose Library doesn’t hold, or I was unable to find), Paulin expresses his concerns about critical debates becoming personal vendettas. Another letter to Paulin from (now famous actor and then fellow Field Day director) Stephen Rea would suggest that the former felt threatened by Longley’s Revisionist attacks on his work and the wider Ulster Postcolonalist project. Rea ends this letter with a note of camaraderie, where he describes Edna Longley as a ‘hard-line nonentity’. 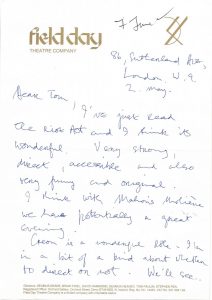 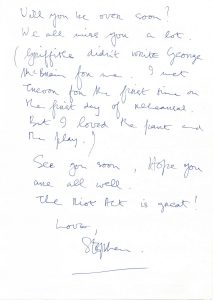 This letter’s undated, but as Rea mentions Paul Muldoon’s ‘programme’ (Muldoon having left the BBC in 1986) and Heaney’s upcoming ‘book’ (presumably Sweeney Astray, 1983) we can safely assume it was sent in late 1983. The comment thus refers to Longley’s unfavourable review of Liberty Tree in Fortnight. Notwithstanding Rea’s lack of faith in her work, Edna Longley would of course in the following decades become the foremost literary critic in the North of Ireland. Indeed, it strikes me as peculiar that within the Rose Library collections, the Edna Longley Papers remain a subset of her husband Michael’s collection.

Despite his poetry’s interest in colloquial language, unlike his Belfast predecessor Padraic Fiacc, Ciaran Carson’s work is rarely written in his native Belfast Urban English dialect. Because I’d often wondered if he’d ever attempted to use it in his drafts, for the second half of my visit to the Rose Library, I turned my attention to Carson’s uncollected poems (MSS 746, Subseries 2.2b), a good deal of which are unfinished. As far as one might garner from his typescript drafts, Carson has never made any attempt to create a new orthography for using dialect (as is common across the Irish sea in the ‘Urban Scots’ poetry of Tom Leonard et al.). Although there are instances which we might describe as experiments in implementing dialect words and grammatical structures, very rarely are these present in Carson’s published collections.

From its ‘pub’ theme and long lines, we can assume that ‘The Eclectic Bar’ was written sometime in the late ’80s, prior to Carson’s return to writing (after his decade-long hiatus from 1976 to 1985) with the formally ground-breaking collection The Irish for No (1987). Asked in interview about this return, Carson told John Brown how he wanted to colour his new poetry with a sense of the demotic: ‘When I did come back […] it was through trying to accommodate bar-talk. Speech and slabber can be entirely odd and strange,’ Carson said, ‘I wanted to get that into poetry’ (cited by Brown 145). ‘The Eclectic Bar’ uses words such as ‘slabber’ (‘slobber’) and ‘half-un’ (a measure of liquor). Used by Heaney, Paulin and more recently, Alan Gillis, ‘slabber’, it seems to me, has become in a sense a sort of lexical heirloom passed between Northern Irish poets. 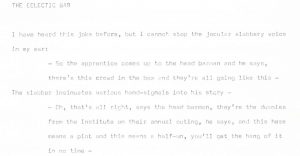 According to the OED and Caroline Macafee’s Ulster Dictionary, ‘slabber’ as a verb means ‘excessive salivatat[ion]’ (OED); to ‘slabber at someone’ is to ‘provoke [them] verbally’; and if a person is a ‘slabber’, they’re a ‘loudmouth’ or a heckler (Macafee 309). Interestingly, amongst the Rose Library manuscripts of Tom Paulin’s Field Day pamphlet, A New Look at the Language Question (1983), there’s an inventory of Hiberno-English dialect words, one of which is ‘slabber’ (MMS 880, Box 31, Folder 5). In his notes for an essay on Heaney’s work, Paulin underlines ‘slobber’ on an annotated photocopy of ‘Death of a Naturalist’ (1966), and in the margin, corrects its orthography to ‘slabber’.

In another poem (presumably from the same era as ‘The Eclectic Bar’), titled ‘Firing Range’, Carson uses the word ‘daren’t’ (‘dare not’) to great effect. 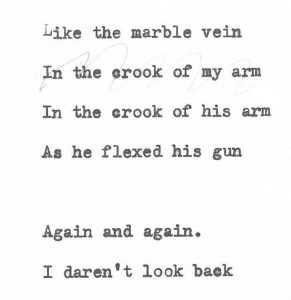 The folder with ‘unidentified manuscript fragments’ in Subseries 2.2b of the Carson Papers contains a poem which applies a nonstandard orthography – ‘Hey there, Hairy Mary, are ye dancin’, nah, nah, it’s jist the way / Ah’m standin’’. 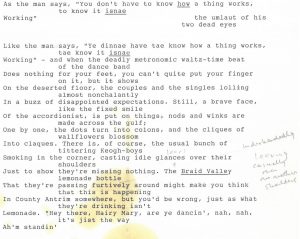 This is an image of a rural County Antrim dialect, rather than Belfast dialect. It’s intriguing that Carson never attempted to orthographise the sounds of his own English or incorporate more urban vocabulary into his published work in the ways in which we’ve seen in the drafts above. One might posit several explanations for this absence of dialect. If I was to hazard a guess, I’d put it down to a form of cultural cringe – that, for Carson, these local words and phrases feel in the last instance overly parochial or twee, even though they’re in common usage, especially in the bar room ‘slabber’ he wished to emulate.

One famous example of this form of socio-linguistic self-censorship is the case of Heaney’s use (or rather disuse) of ‘wrought’ (a South County Derry dialect word for ‘work’) in his poem ‘Follower’ from Death of a Naturalist (1966). Originally, the opening line of the poem read ‘My father wrought with a horse plough’; in its published form this line appears as ‘My father worked with a horse plough’. On this alteration Heaney wrote:

[O]nce you think twice about a local usage you have been displaced from it […] and your right to it has been contested by the official linguistic censor with whom another part of you is secretly in league. You have been translated from the land of unselfconsciousness to the suburbs of the mot juste.

As we can see from the workshop drafts in the Michael Longley Papers (MSS 744, Series 8, ‘Belfast Group sheets’, Box 60), Heaney had changed ‘wrought’ to ‘worked’ before he submitted ‘Follower’ to Philip Hobsbaum’s group. 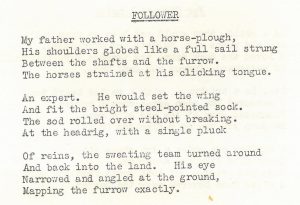 I travelled to Emory with a PhD colleague from Queen’s University, Dane Holt, who also received the Rose Library Short-term Fellowship. Dane would agree that the staff at the library and the wider academic community in Atlanta went above and beyond what was expected of them in accommodating our research and making us feel welcome. At the invitation of Nathan Suhr-Sytsma, Assistant Professor at Emory’s Department of English, we attended a book club at the home of esteemed Irish theatre critic, Marilynn Richtarik (Georgia State University). Serendipitously, the pick for that week’s book club meeting was Leontia Flynn’s latest collection of poems, The Radio (2017). Serendipitous for the members of the club, as Dane and I – who both know Leontia – were invited at short notice. Potentially serendipitous too, of course, in terms of gossip, though our lips were sealed.

Before the meeting began, Dane, Nathan and I sat with Marilynn and her family and she served us supper. Over the most delicious sweet potato soup – Dane and I hadn’t had a vegetable for a week at this point – she asked me what I was researching at the Rose Library. I told her I was on the hunt for gossip around the Edna Longley and Tom Paulin ‘row’, and anything I could find on dialect in the Ciaran Carson Papers. Knowing that Marilynn is close to the Longleys, I thought it might be amusing to tell her about the letter I’d found from Rea to Paulin (where – in an instance which we might describe as ‘slabbering’ – he describes Edna Longley as a ‘hard-line nonentity’). At that moment however, I looked over at the wall, on which hung a framed photo of Marilynn, her husband Matt, her son Declan and Stephen Rea. I self-censored; I asked Nathan to pass me the bread.

Brown, John (ed.), In the Chair: Interviews with Poets from the North of Ireland, County (Clare, Ireland: Salmon Pub, 2002).