Ramsey Baden (19C) is a senior in English and Creative Writing, and the recipient of a Currey Seminar travel award to conduct research in Taiwan.

When I started college, I began realizing just how much I missed my home in Taiwan. I began devoting massive amounts of energy to my new quest: I was to find out what it meant to be Taiwanese-American. It was a scheme that became daunting when I realized I had started just a moment too late, and that I was already physically removed from the island that in many ways feels more like home than anywhere else on this planet. 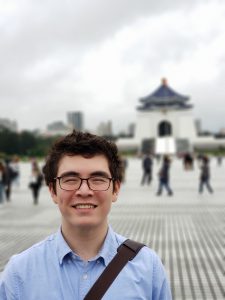 This is me! It’s a bit ironic: I’m smiling in front of a famous monument in Taiwan called Chiang Kai-Shek Memorial Hall, which honors the dictator who ruled Taiwan during the White Terror. It’s important to think critically about the spaces we find ourselves in.

Out of this frustration came the idea for a graphic novel about the White Terror, a period of history in which thousands of Taiwanese civilians suffered under an oppressive military dictatorship. Every Taiwanese person is connected to their shared history, and so in a way, projects like these allowed me to remain connected to my home. By engaging with Taiwan’s cultural memory, I cling to my place in that culture.

In fall 2018, I applied for research grants. A few short months later, I arrived at Taoyuan Airport in Taipei. It felt like I was still dreaming, but I had indeed made it back.

I promptly began making earnest use of my time. In the morning, I would get up and head straight to one of my planned sites as early as possible. I went to these sites with a vague notion of how they connected to the White Terror and came away with a clear view of their place and purpose.

The Jing-Mei Detention Center, now the National Human Rights Museum, was the first stop on my journey. This wound up being the core experience of my trip. The museum itself was established just this past fall, and I was lucky enough to be among the first visitors. It is housed within the existing grounds of a formerly-functional prison, used by the government to imprison victims. Many prisoners kept here were later transferred to another penal colony on an offshore island.

I was fortunate enough to take an English tour that had been arranged for students from an international university. They were kind enough to let me tag along, and for the next six hours I walked in the footsteps of Taiwanese political victims. Every aspect about that prison was riddled with sickening hypocrisy and paradox. During the White Terror, the prison called itself a place of harmony. A wall paved with thousands of victims’ names says otherwise. These are the names of some of the known victims of the White Terror. Countless others suffered without record.

In a truly surprising turn, one of those victims met us in person and spoke about his experiences. He described the events through which the military tortured him into confessing to false crimes (such as planning explosions at two government facilities, which he had never heard about) and subsequently threw him into an island prison for over twelve years. He had been a Malaysian student in Taiwan, and he was taken away from his home in a brutal and permanent way. When he was released, he could never return to his life before the White Terror. His connections to his family and friends had been severed by the Kuomintang government.

I spent the next three days going to the National Central Library to perform archival research in Mandarin. This proved to be incredibly difficult, but I managed to walk away with a decent cache of information. This is very important for the future of my project; as I don’t know when I’ll be back next, having a body of material to translate and process will help me continue my work abroad more effectively. The National Central Library is currently the main library operated by the government of Taiwan, so it houses plenty of materials regarding the government’s history.

My last stop was at the National 228 Memorial Museum in Zhongzheng District, which is in the building that was the Taiwan Radio Station during the White Terror. When the titular February 28th massacre (228) began, this radio station broadcast news of Taiwanese riots around the island as they were brutally stifled by the military. Stored within this building were several artifacts from the White Terror, as well as another slew of information about the chronology and details of the period that were in multiple languages. I was again bestowed with an English translation.

At each of these places, I was able to find stories that I could not have found anywhere else. My archival and spatial research was vital to my project, and couldn’t have been done outside of Taiwan. 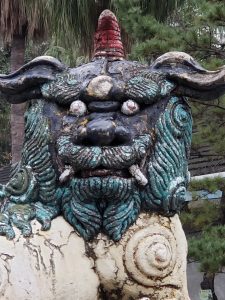 This is a statue that Jing-Mei forced one of its prisoners to build. It is a mythological beast that delivers justice by goring the unjust with its horn. The paradoxes are stark when considering the prison that it sits within. This is my interpretation of the statue. The sun that crowns the beast is featured prominently on the flag of the government responsible for the White Terror.

However, historical details weren’t the only reasons I wanted to go; I also wanted to see how Taiwan is engaging with its past today. And in that regard, the trip was fascinating. I don’t know of another nation in Asia that is engaging with its history of human rights abuse in the same way that Taiwan is. Granted, I still believe that the government has an incredibly long way to go. It still has not released official figures for those that it imprisoned and killed, and its efforts towards compensating the families of those victims fall far short of where they should be. But the openings of these sites in the past ten years shows that people are fighting to learn the truth, and I hope to join them in their efforts.

As I left Taiwan, I reflected on just how much I had accomplished. I was there for eight full days (ten including international travel), but I did enough to fill two weeks’ worth. I captured words and images that are truly haunting, but which will also make their way into my graphic novel as it comes together. After all, the things that haunt us are often the things that we ought to look most closely at. By bringing color to the White Terror, I hope to do my part in dispelling the censorship and oppression that has silenced Taiwanese victims for so long.