The Renaissance of the 12th century brought about the spread of monasticism, increased literacy, and a heavier reliance on science. These changes set the tone for the Italian Renaissance in the 15th century, as well as the scientific developments in the 17th century. Among the most important pieces of writing to be produced during this period of changes is the Medical and herbal miscellany, which was finished at the end of the 12th century. The manuscript explores the medicinal properties of many animals and plants. Looking beyond its contents, however, the structure and materiality of the manuscript suggests that we should read it with a scholarly view, as to learn and implement the uses of the animals and plants for medical practices.

The manuscript was either written in Europe or France during the fourth quarter of the 12th century, and both countries experienced an expansion of cultural and scientific practices during this period. The text wasn’t bound with its marbled endpapers until post-1600, which was often made from vellum. The manuscript itself was written on parchment. It has also had several owners, but among its first owners was Sir Hans Sloane, who was a baronet, a physician, and a collector (The British Library Board). While he may have not been of the highest hereditary titled British order, being a baronet certainly gave Sir Hans Sloane some status above the rest. His being a physician also suggests that he was qualified to read this manuscript, and he would put its contents to good use. 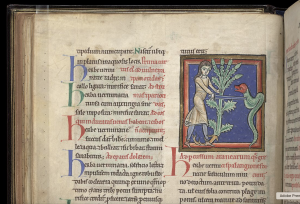 The manuscript was written in Latin, a language that allowed for scholarly exchange. Latin was primarily a written language, and it was often used for theological and educational texts. Thus, this particular text was not intended for a commoner, as they were usually poor and could not afford to receive an education. The use of Medieval Latin indicates that the manuscript is intended for those that belong to a higher status and have a received an education. 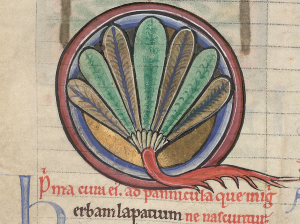 Consider, also, the use of different colored inks. The most common colors of ink used in manuscripts throughout the Dark Ages were red and blue. Green ink was slightly more expensive, making it a more valuable (and desirable) ink to use. The illustration to the left makes use of red, blue, and green pigments. It also has gold lead on the leaves of the plant and in the background of the circle. Using gold or silver required that a base adherent be put on the desired area, and then the lead would be placed on top. Gold was an expensive material, and the process to use gold in an illustration was extensive. Making use of all these colors suggests that this manuscript was extremely valuable, and it was not accessible to everybody. Less valuable manuscripts would most likely feature fewer intricate illustrations like these, an indication that those with status, wealth, and education had access to more beautiful, upscale manuscripts. Thus, we should read this text as if we are scholars that can afford books like these, particularly for becoming knowledgable about advanced medical practices given the time period. 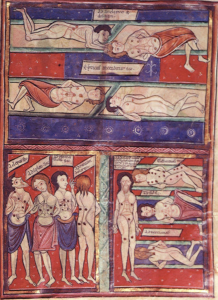 While it may have been common for almost any manuscript to have small illustrations throughout its pages, it was not as common for manuscripts to have illustrations on an entire page like this one. This drawing is of several medical diagrams showing cautery points as red dots (The British Library Board). It is important to consider that illustrations like these required a lot of ink, making the text more expensive. It is also important to consider how illustrations like these worked with the actual text. Complex drawings such as this one would require an in-depth explanation, as to allow scholars to glean meaning from it. If we compare how we use textbooks to learn a particular subject to the way manuscripts like these were used during the 1100s, it is not such a far-fetched idea that more expensive books most likely offered better drawings and more specific explanations. Because education was not as accessible as it is now, few people were able to read texts like these. This manuscript is valuable, and its use of whole pages for illustrations suggests that we should read it with the view of a scholar that is interested in the medical field.

The Medical and herbal miscellany manuscript was a text for the learned. Featured in its pages are drawings of surgical procedures (before anesthesia medicine was discovered), along with plants and animals that had medicinal properties. The manuscript was written in Latin, and different inks and lead were used to draw beautiful diagrams. These small structural details only reaffirm that this text was not meant for a commoner. This book is similar to a textbook for students interested in pursuing a career in the medical field. Those with status, wealth, and an education had access to resources like this text. The materiality of this manuscript suggests that we should read this text with a scholarly view, that we should come away with knowledge that would allow for an advanced exchange of ideas. We should also read this text as being a marker of distinction. Manuscripts like these came with exclusivity to the wealthier, educated people. History tends to repeat itself: nicer books are for superior groups.