The Royal 12 C. xix Bestiary is a fantastic example of why texts and literature of this caliber were only a rich man’s hobby and not accessible to the common man. We can make this argument based on the materials and the presentation of information in this manuscript. The craftsmanship is evident by just looking at this manuscript. This manuscript also includes excerpts from the Bible describing the Creation and excerpts from Etymologiae, an entomological encyclopedia by Saint Isidore of Seville. 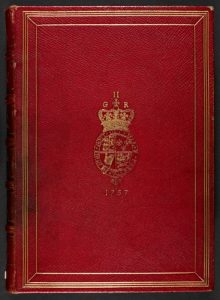 The bestiary depicts both real and mythical creatures, such as a phoenix and a hydra. The illustrations are all shown on a background of gold ink. This color of ink was often created by mixing gold powder or gold leaf into the ink. This means that just illustrating the depictions alone was a difficult and expensive task that only the wealthy would have been able to commission. The illuminations are incredibly detailed and extravagant,

letting no ink go to waste in making sure that the depictions of the beasts were as beautiful as possible. Each illumination is also surrounded by a beautiful border, often a blue, green, or red ink. The sheer number of illuminations also tells us that this manuscript was meant for a wealthy audience. There are more than 80 illuminations in this manuscript, all of them fully inked and not just drawn in. There likely was several more, as there are a couple of leaves missing from the manuscript.

As you can see in this illumination of a centaur, the background is a gold ink that reflects the light. This Centaur is wrestling a snake. 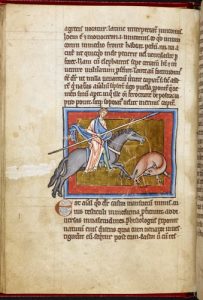 Here we see again the golden ink background that is prevelant throughout the manuscript, further reinforcing the assumption that this was an incredibly expensive work and only available to the wealthy. This illumination is showing a hunter chasing after a beaver. The beaver is described as biting the hunter’s testicles off to ward him off.

A very important thing to consider when looking at a manuscript is the language in which it was written. This manuscript was written in Latin. This means that just because you were literate in the English of the time, did not mean that the knowledge within this manuscript was accessible and relevant to you. Only the rich nobles and members of the clergy would have been able to read and understand this manuscript in all of its glory. The text being in Latin and the illuminations being of such high quality tells us that this existed only for the wealthy to use.

The physical aspects of the manuscript must also be taken into account when trying to understand its origin and its use. This manuscript is a medium to large size, 220mm x 160mm, which translates to roughly 9 inches x 6 inches. This means that it was not so large that it could not be transported easily, but it was not potable by design or meant to be carried around as an everyday reference. Also looking at the images and scans of the illuminations and text, we see very few, if any, mistakes, smudges, or smears. This shows that the manuscript was kept clean and maintained, only being handled by those who knew what they were doing and had clean hands. This again shows that only those who were wealthy (and clean) were able to access this manuscript. We also see that this manuscript had gilt edges, which means that the edges of the pages where covered in gold, so that if you were looking at the closed manuscript, you would see an edge of gold on the pages. The pages of this manuscript were made out of parchment and in a folio arrangement. Parchment is a writing medium made primarily from animal hides, making a durable yet still pliable writing surface. A Folio is a way of arranging the pages, so that a page is folded once to make into two or more pages. The use of parchment in this manuscript shows that this was an expensive and quality work of art, meant to showcase its craftsmanship. This manuscript’s current binding looks to be leather, and is bright red with a gold coat of arms on the cover and the year 1757 printed under it. This is the year that the British Museum acquired the manuscript and they were the ones to add the current binding.

This manuscript and its quality craftsmanship shows us that it was created for wealthy clients, nobles and/or members of the clergy to use. The manuscript featuring its exquisite illuminations and its quality construction are a testament to this. Latin being a language that only the educated, and by extension the wealthy, could use and understand further supports this claim.