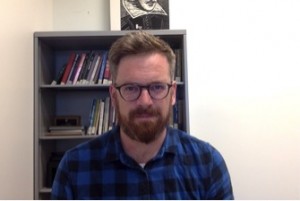 Sean McAlister will be a Sawyer Seminar Postdoctoral Fellow for the 2016/17 academic year. He completed his Ph.D. in English at the University of British Columbia in 2014. His research focuses on nineteenth-century American literature and print culture, theories of mass and popular culture, and affect theory (with a particular focus on the work of Silvan Tomkins). He is currently working on a book project, “Interest in the Market: The Poetics of Partial Commodification,” that integrates Frankfurt School Critical Theory and the affect theories of Silvan Tomkins in order to analyze the pre-culture industrial poetics of the antebellum American literary scene. His work has appeared in Language and Literature and Criticism.