One of the most important dishes in my family is called tteokguk. Tteokguk literally translates to rice cake soup, and it not only is an important dish in our family, but it also symbolizes South Korean culture in various ways. To me, Tteokguk is a dish so important to me that it is one of foods that I crave whenever I am homesick. Though there are many variations of this dish, my favorite is my mom’s style: simple, yet so rich in flavor. Always being the first meal my mom cooks for me when I come home for break, Tteokguk brings about feelings of nostalgia and bliss. As I take a mouthful of Tteokguk, I am taken down the memory lane of my four tough years in high school. As an athlete, I was always out the doors by 6 a.m. to go to morning practices. Especially during the cold winters of Seoul, which can get as low as 10 °F, practice sessions were hard to endure. My mom, a typical Korean mother who is always concerned whether or not her child is getting enough food, would always cook me a hot bowl of Tteokguk. “Hot soup and some rice cake will make you feel warmer on the field,” my mom would always tell me. Though sleepy without appetite, I would always finish the entire bowl to see my mom proudly smile, a sign of relief that her child was well-fed. To my surprise, on the days I ate Tteoguk for breakfast, I felt warmer, due to the warmth of the soup or perhaps the warmth of my mom’s heart. The warmth still prevails in my heart and mind, intensifying whenever I eat Tteokguk.

Tteokguk is symbolic of South Korean culture as well. Though it can be eaten at any time of the year, this dish is generally consumed on New Year’s Day. Interestingly, Korea has its own way of counting ages; a baby is considered a year old the moment it is born. And from that point, every year, on New Year’s Day, a person turns a year older, despite it not being their birthday yet. For example, a person born in August 2019 would turn 2 years old on January 1st, 2020. It is said that a person turns a year older if they consume a bowl of Tteokguk on New Year’s Day. In the 19th century, people commonly asked, “How many Tteokguks did you eat?” to ask for a person’s age. It is believed that Tteokguk was first introduced as a dish for New Years because the ingredients symbolize various things. The rice cake that is put into the bowl is originally a long piece of rice cake, almost like a long sausage. This long piece of rice cake represents longevity. The rice cake is cut into pieces to prepare Tteokguk, and it is cut up into circular pieces that almost look like coins. With an abundance of these circular rice cakes in the bowl of Tteokguk, a spirit of wealth and good fortune is thought to follow the person.

Tteokguk was first cooked with beef to make the soup, but since its invention, variations in cooking methods have formed. This difference in preparation methods is important to my family as a whole, for it shows the different roots and origins of where my mom and dad came from. My paternal grandparents are from an area called Masan located near the Southern coast of the Korean peninsula. Located near many ports, Masan is known for its seafood. Having grown up in this area, my paternal grandmother always incorporated seafood into her cooking. Her style of Tteokguk is made from anchovy broth, which has a crisp, refreshing taste much lighter than beef broth. My maternal grandparents are from a city called Daegu, which is located in the south away from the ocean. Seafood is less commonly used in this region, so my maternal grandmother uses beef broth to make Tteokguk. Her broth is very intense and resonating in flavor, for it is cooked on low heat for 5-6 hours. Both styles of Tteokguk represent where my roots lie, which is quite often forgotten when living in the United States. Though it may not be my ultimate favorite dish, Tteokguk is a dish that not only satisfies my taste buds, but it also reminds me of my frequently overlooked ancestry. It’s a dish for both the mouth and the soul. 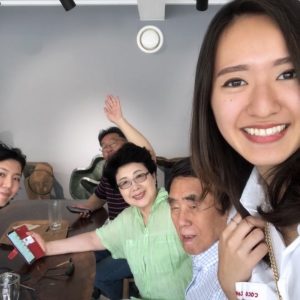 This is my maternal grandparents with my mom and dad. It was taken when we went out to eat Tteokguk! 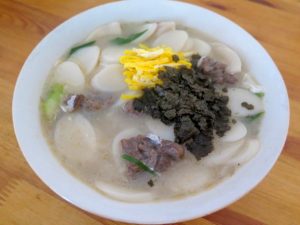 This picture was taken from https://www.maangchi.com/photo/tteokguk-4. This is the beef broth version of the dish.