My name is Alisha Mody, and as a social anthropologist interested in capturing “the spirit—the natives’ views and opinions and utterances”, I will be investigating an important cultural artifact: where we eat (Malinowski 1966, 25). Like Bronisław Malinowski, a world renowned anthropologist and ethnographer, I too share the common goal of using scientific fieldwork in order to “grasp the native’s point of view, his relation to life, to realise his vision of his world” in the hopes that “we shall have some light shed on our own” (Malinowski 1966, 25). The subject of this study is a well-versed, intelligent, and strong woman native to Dar es Salaam, Tanzania whom I like to call Mama Asha. While she is not my birth mother, she quickly became a mother-like figure to me in the short three-weeks that she hosted me, along with several other foreigners, in her home in Dar es Salaam in the Summer of 2016. I was given the privilege of living with her and immersing myself into her culture while I was volunteering at Mwananyamala Government Hospital. As I was out of the house most of the day working ten-hour shifts, the only time I was able to spend with Mama Asha was on her living room floor where I ate breakfast with her early in the morning and dinner late at night. Despite the short interactions we would have daily, we nonetheless formed a powerful bond over these meals we would eat on the floor and led me to begin calling her “Mama”. For this reason, I have decided to conduct a study on Mama Asha’s “dining floor” and how it is able to foster such a loving and welcoming environment for the various strangers that she hosts in her home daily.

As I currently study in Atlanta, Georgia, I am unable to visit Mama Asha in Dar es Salaam to conduct this study through participatory fieldwork. Instead, I will be employing the observational method, which is deemed the least invasive method. I chose this method to minimally integrate myself into the culture I am studying in order to gather observations and data through verbal communication, while also remaining non-intrusive of her daily habits. This will be done by conducting an interview with Mama Asha via phone.

I scheduled an interview with Mama Asha via phone at 9:00 a.m. EST, which was 4:00 p.m. in Dar es Saalam, on Saturday, July 13, 2019. After catching up with her, I explained my study, its relation to the field of social anthropology, and asked if she would allow me to interview her about her “dining floor” and habits. She thanked me for remembering her and said she was thrilled to participate and be the subject of my study. I asked Mama Asha a series of questions while I took extensive and detailed notes on her answers and comments. I began by asking her why she chooses to sit on the floor to eat. She explained that she very well could get a bigger dining table to accommodate all the members in her household, but she specifically chooses to sit on the floor for the people she hosts. She believes that the floor is a more welcoming and relaxed place of eating, which allows people to bond faster than a formal dining table would. Mama Asha expressed, “I consider whoever is eating with me on the floor that day, my family. Many may not enjoy it at first and it is a culture shock for most, but by the end of it they are usually calling me Mama Asha and they start to trust me.” She said she only ever uses her small kitchen table for eating during lunch if she is alone as it is too small to fit her, her husband, and her host kids all at once. However, she made it a point to mention that she would never let anyone older than her sit on the floor out of respect. When her husband’s parents come and visit, they all eat at the table.

She is currently hosting a couple from Scotland and a young man from Canada whom are all in Dar es Salaam for volunteer work. Every morning she prepares a light traditional breakfast for her husband and those she is hosting consisting of breads, chapati (a flatbread tortilla), samosas (a triangular fried snack originating from India stuffed with various fillings), pilau (rice mixed with a variety of spices), hard boiled eggs, and a large steaming pot of chai. She utilizes her kitchen table, which is a small four-seater square wooden breakfast table, in order to roll the chapati dough, stuff her samosas, and prepare other breakfast items. She uses this table to cook and prep breakfast as she does not want to make a mess on the kitchen counter because her host kids use the counter after breakfast to make their sack lunches to-go before they leave for work. For this reason, they all have breakfast and dinner on the floor in the living room family-style. She discussed her daily rituals with me in vivid detail. At about 7 a.m. they all gather on the living room floor for breakfast. She was telling me about the young man from Canada who is “a particular delight to have around at breakfast” as he has a curious mind that is constantly asking about how she prepared certain traditional food items, and Tanzanian culture in general. All meal times on Mama Asha’s “dining floor” seem to be associated with deep discussions and rich cultural exchange of ideas as people from various parts of the world eat with her on her dining floor.

During the day, Mama Asha runs a day-care from her home for children from ages of 4-10 years-old. When they are not running around the yard hula-hooping or playing with the ball, they are sitting on the floor pillows in a circle on her “dining floor” ready and eager for snack time to begin. Mama Asha said, “Its a social hour for them. They all finish their snacks in the first 5 minutes, but they sit for over an hour, talking, laughing, some even fighting, but they still create strong friendships. And the younger ones seem to mature faster as they learn from the older kids.” At night for dinner, her husband and host kids once again sit in a circle on her “dining floor” and they all talk about their day and share their experiences with one another.

While it was difficult and took a while for Mama Asha to verbalize the effect that eating on the floor has on the relationships she forms there, she and I came to a realization during the interview: there is a sense of vulnerability that comes with sitting on a stranger’s floor and eating with them, which creates an immediate connection and a sense of trust. I believe it is also possible to extend this study to include the anthropological concept of “foodscapes”, which addresses the “flow of ingredients and cuisines across the globe, and their local presence” (Crowther 2013, 25). As Crowther explains, across the various culinary sites around the world people are exposed to new foods and eating practices that they are able to engage with and associate with meaning. As Mama Asha hosts and feeds these various strangers of different race, culture, traditions, and backgrounds, she is slowly “homogenizing the world’s food culture” through globalization as these ideas and practices travel away with the strangers into their own cultures (Crowther 2013, 25). The main thing I learned through this study was that the act of strangers coming together and eating on Mama Asha’s “dining floor” changes each person’s perspective of the world, forces them to become more accepting of others, and reduces perceptions of inequality. People who sit on Mama Asha’s floor start to view those of different socioeconomic background, race, and culture as more equal than they might have in different social scenarios.

(Unrelated to this study— below is a photo of Mama Asha and I from my stay with her, a picture of her day-care kids playing, and a picture with my “host siblings”!) 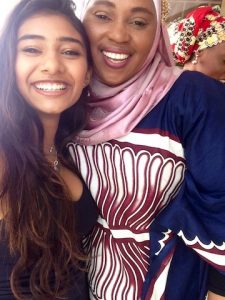 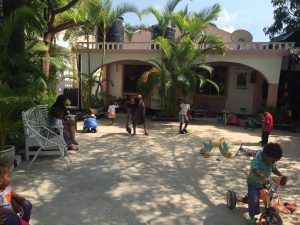 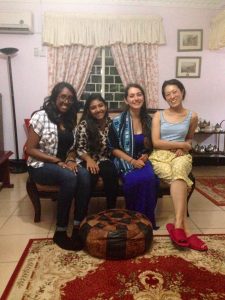 One Reply to “A Dining Floor for Strangers by Alisha Mody”