Noodles, although a humble product, are a loved staple food for many people throughout the globe. With evidence dating back at least 4,000 years, as uncovered by the Lajia archaeological site in northwestern China, the noodle’s cultural history has spanned millennia. However, like any aspect of culture, modifications do still occur. While the unearthed long thin yellow noodles made of broomcorn and foxtail millet may have been one of the first recipes, today the possibilities are endless. With varieties created from durum wheat, rice, buckwheat, or other grains; the ingredients of the noodles themselves are only one factor that can be manipulated by the chef. Then comes the shape, cooking method, sauces, stews, and other accompaniments that make each dish both special and unique.

While most pasta dishes are unique, a common theme in the production and consumption of noodles lies in the location of the cooking. The dish’s hometown often plays just as significant a role in its development as does the mind of the chef who first invented it. Xie Laoban from Chendu serves their Dan Dan noodles with Sichuan pepper, Brazilians top their pastas with feijoada, Japanese eat Tonkotsu ramen in a flavorful pork bone broth, and Ethiopians mix in Berberé. Each of these locations not only incorporate locally sourced and produced ingredients into their pasta dishes, but they have cultural and historical stories associated with the creation of the dish.

Take, for example, the long-life noodle. This dish, one of the most celebrated noodle dishes in China, is eaten on Chinese people’s birthdays. While there are variations to the ritual, often each person at the table will scavenge through their bowl to find the longest noodle and place it in the center for the person of the hour to eat. This is a tradition that goes back hundreds of years. As a result, Chinese noodles, with this variety in particular, have become a cultural symbol for longevity in life. In Italy, pasta serves as a glue to bring people together both in eating and cooking. Ravioli, for example, is a labor of love and very time intensive to make if left to one person. Instead, families join together along large tables to create batches of ravioli that they later eat in good company.

With many differences in the preparation across cultures, one thing for certain is that people love pasta. According to the The Truth About Pasta, Oxfam conducted an independent survey in 2011, where pasta was named the world’s favorite food. Pasta is “sumptuous enough to grace the cover of luxury food magazines, yet accessible enough to be used in nutrition assistance programs and budget recipes, pasta is truly a food that brings people together.” Pasta dishes are simple to make, cheap, and nutritionally wholesome when prepared with fresh vegetables and healthy fats, so it makes perfect sense that noodles are so interwoven into China and Italy’s culinary history.

Being so wide-encompassing, it is difficult to truly define all of China’s and Italy’s noodles. Perhaps, a decent definition would read something like: a preparation of milled grains such as flour or rice mixed with liquids like water and/or eggs to produce a dough that is shaped, cut, and then cooked with other toppings and ingredients to produce a final dish that is best produced and eaten amongst family and friends. This definition aims to be broad enough to overlay all the regional varieties of noodle recipes that are seen in these countries as well as touch on the aspect of eating the noodle and what makes this process so meaningful. The noodle is so much more than just a simple dish of flour, eggs, and water. It is a tool to bring people together, symbolize longevity, harbor cultural flavors, and nourish the body and soul. 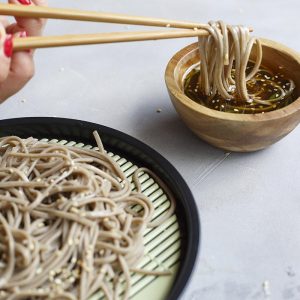 This image of soba dipping noodles represents the endless possibilities of what noodles can be. A noodle is a blank canvas, but still a work of art all to itself. They are delicious enough to be eaten plain or can be transformed into a greater dish when accompanied with other ingredients.