The Identity of the Noodle: Bringing together flavors from around the world

The noodle is an integral part of cuisine around the world. No matter where you are, there is a good chance that you can find a Chinese or Italian restaurant and subsequently have a chance to enjoy some noodles. I remember once when my family visited Alaska on vacation and we spent one night in the small town that was only accessible by boat. Despite this isolation, there was still one Chinese restaurant and one Italian restaurant. This reach of the Chinese and Italian noodles is what makes them such an integral part of their cultures. Around the world, those cultures can be defined from one food item, the noodle.

The reason this item is associated so strongly with Chinese and Italian cultures is because of how strongly it is tied into the history of these great cultures. In Chinese culture the noodle can be traced far back to the Han Dynasty when they were originally classified as “cake”, as detailed in the “Noodles Traditionally and Today” article. The article goes on to detail how the Wei, Jin, Southern, and Northern dynasties created new noodle shapes from the original called Shui yin and bo tuo styles. The shui yin style for example now looked like, “flat noodles shaped like a leek leaf cooking in a pot with boiling water” (Zhang, 2016). This was just the first of many new variations of the noodle which has led to all the different kinds of noodles that exist today. The differences can often be classified by region as the same article details how East China features “Shanghai Noodle in Superior soup”, Southern China features, “Guangzhou Wonton Noodles”, and Central China features “Wuhan hot noodles with sesame paste”. These are just a fraction of the different kinds of noodle that exist within China. Each region has a different environment and thus different resources which illustrates why these noodles are indicative of different regions and the people who cook them. Noodles however reflect more than just regional differences, they also illustrate the cultural background that ties them so tightly into society. One example are the Quishan minced noodles which have also been called sister-in law noodles and ashamed son noodles. These unorthodox names have a story behind them which carries the value of these noodles. The story goes that there was an orphan scholar who was raised by his brother and sister-in law. She was a great cook and made special noodles which “helped him read for fame”. The orphan was successful and as a result the noodles became famous for prosperity as “sister-in law noodles”. Attempting to mimic this success, parents began cooking these noodles for their kids to encourage the same success, however the same results were not achieved and the noodles took on a second name as, “ashamed son noodles”. These stories and names illustrate how the noodles are reflective of the culture and people who cook them. This is just one of many stories as there are many that cover all sorts of topics including friendship, business, weather, and many more. What they all have in common is that they directly reflect the people and history behind the dish.

This reflection of the noodle on region, culture, and people is not unique to China. Italy is another country that is undeniably linked to the dish. Pasta has become such a household item across the world now that it is hard not to find someone who at least knows of a type of pasta. Pasta/ noodles can be dated back to the Etrusco-Roman times where dry pasta was a staple. It was later rediscovered by Marco Polo. Italy is a much smaller country than China but still it has vast regional differences in the dish. The biggest difference is between the north and the south. In the “History of Pasta” article, the author details how Arabic invasions during the middle ages resulted in a heavy Mediterranean influence that is still present to this day. That influence is particularly noticeable in Sicily with ingredients such as cinnamon and raisins. Given its shape as a peninsula, southern Italy has been a strong recipient of various Mediterranean influences from all sides. Meanwhile, in the north the pasta has a very different style. Northern Italy draws from French and German influences which highlights the different resources that are present in the area. These regional differences help to illustrate how pasta reflects on the region and people who cook them. It highlights the rich history of the Italian peninsula and how so many different forces have come together to shape what we know as pasta today. This historical implication is one reason why pasta is so tightly engrained in Italian culture. While pasta can be traced all the way back to the Etrusco-Roman times, one reason that allowed it to become popular all over the world was the age of exploration. The “History of Pasta” article detailed how the high nutritious value and ability to stay good for so long made it the perfect dish for voyagers on long journeys. This dry pasta made its way around the world through these voyagers and helped spread the dish to its high level. Another type of pasta, fresh pasta, soon made its debut and brought a whole new type of noodle to the table. With the introduction of the fresh pasta with sauces, the need for new noodles to hold onto these sauces became apparent. This need was met by all sorts of new noodle shapes featuring ridges, twists, and ribbons to hold the new flavors. In northern Italy, these dishes were typically prepared using eggs and flour while in southern Italy semolina and water were used. Despite these differences the best tasting pasta came from regions that used “fresh local ingredients”. This is what keeps pasta relevant in Italian culture today. In the modern age of mass-produced pasta dishes, it is sometimes difficult to find dishes that reflect the true history behind the dish, with painstaking effort and precision applied to it. This is Italian culture and how the noodle reflects on the people who make it.

Overall through this process I have learned about many different types of noodle and pasta dishes and more importantly the reasoning behind the variations. All these differences make it very difficult to narrow down just one definition of noodles but one that I feel does a good job encompassing all facets of the noodle would be: a food item primarily made of a flour that is used to draw together flavors from around the world so that whatever resources are available can be enjoyed together. I could definitely go on and add more sentences to cover more aspects of the noodle, but I feel that this definition does a good job of expanding beyond the clinical and technical aspect and really embracing this dish as one that brings together flavors and people from all over the world to encourage unity among all. I chose the picture below because I feel that it really illustrates the different types of pasta while showing that they can bring together so many different types of flavors to make the dish unique to the person who is making it. Eating is a social activity and noodles are a social tool that allow people to share dishes and flavors that are unique to them to encourage a more wholesome and holistic view of global cuisine. 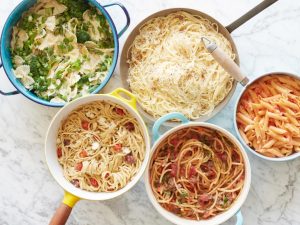 One Reply to “The Identity of the Noodle: Bringing together flavors from around the world”