There is no doubt that the noodle is quite directly used as a means of temporary nourishment for the day. However, through, legends, history, and culture it becomes evident that the idea behind the noodle serves the greater purpose of being a permanent means of well-being, advancement, and success in physical, social, and spiritual aspects in life. Although used as a staple part of diets across the world, their uses are distinct among every region, as are their integral role in shaping their respective cultures. Thus, we come to the conclusion that a single identity cannot be used in reference to noodles. Rather, the definition of noodles and the cultural implications beyond its physical definition is unique among regions and is constantly changing within regions themselves.

The beauty of having such a dish so ancient like noodles is that the dish travels with the culture and civilization through time. In this way, noodles are not a dish consumed in Chinese culture, but rather is a way to demonstrate and maintain the Chinese traditions of the past, while simultaneously being molded to portray changing times. The nomenclature of noodles, the method of consumption used, and when they are made throughout the year have proven to be one of the most enriching ways of telling the history and customs of the country. Looking at simply the nomenclature of dishes involving, the Chinese ideals of respect for elders and parents, desire for children’s success, and camaraderie can be derived, which is still resonated within Chinese families today. For example, the name dutiful son’s noodles used in the place of seafood noodles was derived because of the ancient story of Yi Yin feeding his sick and bedridden mother a soup made with noodles, chicken, pig bones, and seafood (Noodles, Traditionally and Today). The traditional value of respecting elders, which I, myself, have vividly noticed when spending time with my Chinese friends, is thus represented within this dish and serves as a reminder of the etiquette heavily emphasized in Chinese culture today.

Furthermore, noodles were both directly and indirectly the cause of industrialization and development within China and Italy. The yearn to increase noodle varieties and develop better and more efficient techniques to make and create noodles resulted in faster methods of cooking and new devices, ultimately leading to more time to focus elsewhere and in other sectors of society. Therefore, noodles have in a way been a driving force engrained within not only culture but also within government and economics. Whether new developments were intentional or accidental, each carry a story that contributes to the cultural and industrial wealth of the society as well as attributes to the ingenuity and dedication of the people. We can see these new developments in the story behind the accidental creation of the Yi noodles by Yi Bingshou during the Qing dynasty, which served as a framework for the creation of modern day instant noodles by Momofuku Ando hundreds of years later (Noodles, Traditionally and Today). Not only did the invention of instant noodles cause a revolution in eating habits and fast food, but through various settlements and lawsuits, it also sparked competition and regulation in markets which undoubtedly benefited the economy.

The creation of the noodle itself and the time spent consuming it must be truly taken notice of in order to understand the importance of family and friendship within Italian and Chinese households. The foundation of the Mediterranean food pyramid, which is used as the framework of Italian diets, is spending time and enjoying the company of family and friends, emphasizing how important camaraderie is within Italian culture. In his book, Made in Italy, Giorgio Locatelli reminisced about how growing up, spending time with his family involved gathering in the kitchen and making homemade pasta to share with those he cared about. It is apparent that each noodle created served as a celebration of family and life, reflecting the convivial values of Italian culture.

There is no way to truly encompass within a single definition the wide breadth of the taste of a noodle, the adventures the noodle has experienced while traveling across the world, its wisdom gained through the passing of time, the culture it has carried through history. However, I believe an extremely paraphrased and incomplete definition would be something along the lines of: a global, staple food made in a various ways with a variety of ingredients and is used as a vehicle of transporting people of today to the past, a method of bringing the traditions of the past to the present, and a means of celebrating culture and each other in between.

All in all, noodles have served the purpose of fueling people when a country and the civilization depending on it needed fueling, as well as uniting a civilization together when a country needed harmony. From references to various forms of noodles in ancient texts and images in China and Italy as well as its maintenance not only in diets in those aforementioned countries but also in diets around the world, there is no room left to deny how powerful the ever-evolving noodle has been in shaping global culinary culture. As ideas and materials were exchanged around the world, as resources were in surplus, depleted, or introduced, and as wars and invasions took place within history, the noodle was there to hold these occurrences within its grains, whilst altering slightly, in order to forever serve as a reminder of history, culture, and celebration of life.

I have chosen the image below to represent the multi-faceted noodle because it identifies noodles as a global food as it demonstrates them in both their Chinese and Italian varieties. Furthermore, it has shown the development of faster methods of creating noodles, showing just how far and progressed noodles have become in the present day. 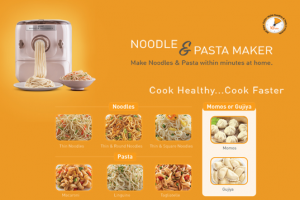 One Reply to “Noodles: A Mode of Transportation by Tanya Rajabi”