I have absolutely no idea where to begin.

The class discussion about the noodle definition quickly concluded that the Oxford and Cambridge dictionaries confine the noodle to such lifeless, one-dimensional qualities that it resembled nothing more than an ingredient, a mere doughy base of meals instead of the gastronomic foundation of cultures. And if something that provides meanings failed to capture a fulfilling essence of the noodle — then how could I? I am not one to circumscribe subjective things within a box of objective definitions, and throughout this class’ progression, I think we have started to comprehend the noodle as something more than a concrete object: an entity.

Like the golden thread, if you will. The noodle winds through the fabric of time, fastening cultures, traditions, countries — humanity — together. A golden thread of frayed ends, without an easily discernible introduction or conclusion (much like this written blog).

Although I still have no idea where to begin — I think history does. History can offer us a delicate start of the thread in Italy, home to the debate of whether it was the Etruscans or Marco Polo (upon his return from China) who brought the noodle to the peninsula. The noodle took form as the well-known Italian appellation “pasta,” from impasto, the blend of dough and water that “waits to be shaped by the expert hands of the pasta maker that ‘feel’ its warmth” (Form and Substance, 10). Such a description animates the pasta with qualities of a living, breathing entity, pliable under whomever holds it. This adaptability is evidenced by the countless pasta variations, each originating from different regions in Italy. From Arab-influenced macaroni in Sicily, to Piedmont’s agnolotti (stuffed pasta pockets), to Sardinia’s fregula (crumb-like pasta) and malloreddus (saffron-infused shells) — the diversity in pasta types and sauces are as abundant and widespread as there are geographic regions (Julia Della Croce’s Classic Italian Cookbook). As “pasta meals really represent the simple pleasures of life,” each type is made from the same simplicity of flour, water, and salt (Truth About Pasta, 20). However, it is the texture that gifts each its unique character. Thin butter or thick tomato sauces would generate a different feeling with, say, long strands of linguine than with soft dumpling-like gnocchi. Yet, all the distinct forms of pasta are created from the same humble origins, and fall under one element — pasta — a unifying form reflective of a unified Italy in the 1800’s. The golden thread of the pasta noodle links the people and mirrors their strengths: adaptable, unique, and firmly united as one.

If we follow history down the trail of cultural gastronomy, we will inevitably arrive at another prominent niche of the noodle: China. The first recorded discovery was during the Han Dynasty; the original form was named bing, or wheat “cake” (Shu Xi’s Rhapsody on Pasta, Knechtges 449). The dough was hand-pulled longer and longer until it resembled the unmistakable strand of the modern noodle. This creation eventually established its place in the warmth of not just the kitchen, but in the people’s hearts. Na Zhang’s Noodles, traditionally and today details the numerous ways “‘human nature’ and ‘worldly common sense’ materialized in the noodles” (Zhang 210). Gravy noodles (打卤面), served during occasions of matrimony or of moving into a new residence, represented a new “flavored” life; “dragon whiskers” noodles (龙须面), served on lunar day in February, embodied the honored creature. The noodle wove its way into the people’s traditions, and also into their traditional values. Adding vegetables and eggs was equivalent to adding the “principle of ‘food diversification,’ and promote health for people” (Zhang 212). Meanwhile, the namesake of “dutiful son’s noodles” (孝子面) is the story of a man who cooked noodles for his sick mother with such efficiency, care, and tenderness that she soon healed, thus integrating the honored core of filial piety into the very nourishment the people consume. The “longevity noodle” (长寿面), typically eaten on birthdays, symbolizes long-life and durability. Interestingly, in the narrative Long-Life Noodles, the dish oversaw not only the hopes and prosperity of one man, but also his despairs as he descends into misfortune and outlives his loved ones (Durack 88-89). For him, longevity noodles morphed into a cursed emblem of his long life. With this, the noodle appears to be so intertwined with the people themselves that it not only manifests within our customs and values, but also within our existence, within each apex and nadir of our lives.

The noodle thus transforms into something more than a mere reflection of humanity — it becomes the golden thread of the human experience.

The noodle, to me, is nicely encompassed in this graphic design.

I took a liking to this image, ambiguous yet full of possibility. The utensils overhead are unclear. The noodles are not in any distinct, easily recognizable form, but this same shapelessness allows the beholder to envision any form of the food that brings them meaning. The lack of color leaves anyone to paint it with whatever preferred shade, much like a page from a coloring book; perhaps yellow like the traditional pasta, white for rice noodles, maybe green to reflect the “nutritional” noodles of our modern progressive times… In the end, the palette is our palate. This ambiguity does not assign a specific culture, custom, people, etc. to the noodle, instead focusing on its connections to us. Therein lies the malleable, abstract nature of the noodle that I think the dictionary definitions lacked.

Perhaps this was not intended, but it also seems like the image resembles a house: the utensils the roof, and the noodle the hearth and heart of the residence — a foundation of the people’s homes and roots.

For me, the noodle is interwoven in my memories.

My memories of the noodle are threaded through my relationships and connections with others: the past memories I nostalgically recall, present experiences that I treasure, and the future curiosities that I await. 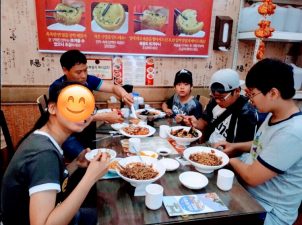 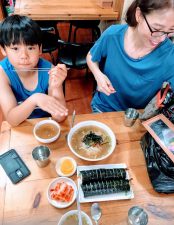 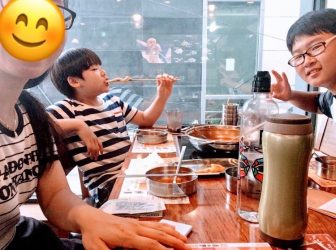 Ghosts of noodles past: a few noodle dishes embodying the tender nostalgia of my life in Korea. Top left: First time with my [host] family at the original Chinatown in Incheon, before exploring gorgeous murals depicting the rich history of the Chinese-Korean fusion, a culture that breathes and thrives among the people, and manifests in the very 짬뽕 (jjamppong, spicy seafood noodles) and 짜장면 (jjajangmyeon, black bean noodles) we devoured. Bottom left: My [host] brothers and I wreaking havoc at an all-you-can-eat ramen and 떡볶이 (tteokbokki, rice cake) hotpot buffet. Top right: My last noodle dish in Korea, 잔치국수 (janchi guksu, wheat noodles in light anchovy broth), with my [host] mom and brother before the tearful trip to the airport. The noodles tasted especially salty that day. Ghost of noodles present (bottom right): nocturnal shenanigans with friends at Pho 24, my home on Buford Highway, open 24/7 for all who crave a warm bowl of pho — even at 2 a.m.

At every period of my life, at every climax, every bottom, and every curve in-between, a variation of the noodle has made its presence.

But perhaps to a historian, the noodle is the intersection of cultural thought and philosophy; perhaps to a chef, the handed-down recipe embeds their family’s values; perhaps to a college student, it means all-nighters with take-out and microwaved ramen.

Its “definition” is as broad and profound as there are people themselves. With each person, with each life — each human experience — the noodle delicately morphs and regenerates with another nuanced meaning.

Thus, the golden thread continues weaving through the kaleidoscopic patchwork of cultures, across the undulating quilt of history and time.

And on a rainy Wednesday night, the noodle weaves its way into the present, where a light-bulb flickers on, and a laptop screen begins flashing with the words: I have absolutely no idea where to begin…

One Reply to “The Present, the Future, and the Past(a)”