The Capuchin Catacombs of Palermo are burial catacombs in Palermo, Sicily in southern Italy. Around eight thousand corpses in varied states of decay inhabit the site. While there exist other historically fascinating catacombs in Europe, Capuchin Catacomb is known for its perfect preservation of bodies — the particularly dry atmosphere allowed for the natural mummification. Such climate also brought about the birth of dry pasta. From the Middle Ages, southern Italy has been the birthplace of different shapes and varieties of dry pasta; made from durum wheat, its firm texture that remains even through the cooking process to give you a crunchy al dente bite which is outstanding.

In Bologna, however, the pasta culture is drastically different. Tortellini, sometimes also described “belly button pasta”, are ring-shaped pasta typically stuffed with a mix of meat, cheese, or a combination of both. Fresh packed tortellini is found in the refrigerated section of the supermarket as it has a much shorter shelf life. Because it’s more expensive, people often assume that fresh pasta is better than dried, but that is not true. The comparison is apples to oranges; they are just different types of pasta, and certain types of pasta are more suited to certain kinds of sauces and cooking methods. While dry pasta was a product of warm breeze from the Mediterranean Sea, northern Italy boasts a vast array of local cheeses. Both identities of Chinese and Italian food come from its diversity by regional differences; Italians place strong emphasis on fresh, local and seasonal ingredients, cooked simply and seasoned well. The “regionality” makes it easy to understand why fresh, local foods are the choice of cooks in both Italy and China. The Alpine regions produce a great number of unique cheeses — the famous Gorgonzola and Asiago cheese come from northern Italy as well.  Because northern Italy is marked by humid summer and harsh winter, its pasta culture revolved around the regionality; instead of dry pasta, local ingredients such as meat and cheese are utilized, so pasta is kept fresh.

Coal has supplied more than 70 percent of China’s energy for the past 50 years and has shown no sign of waning. China first began burning coal for heat, cooking , and smelting steel during the Han dynasty. Usage of high-flame coal single-handedly changed the culinary culture of China — stir frying, in which ingredients are fried in very hot oil while being stirred in wok, emerged as a groundbreaking technique. While minimizing the destruction of nutrients, stir-frying is exceptional at bringing out essence of ingredients. Noodles with various thickness and shapes were experimented, giving birth to an array of new dishes. Near my high school in Taipei was a small store called ‘Shanxi Noodle House’; the texture and feel of these noodles stayed stubbornly in my mind for years. The owner of this place practiced the art form for years to master — noodle dishes were served stir-fried or in broth. My classmates and I would always struggle to choose a dish here, and we would always end up ordering 5 different dishes and sharing. 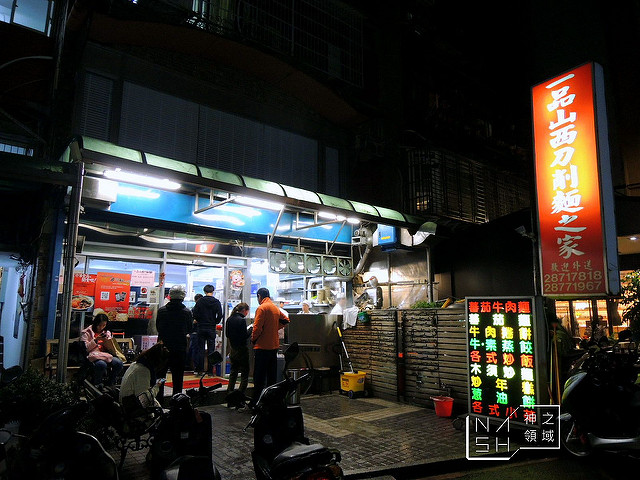 To both Chinese and Italian people, ‘noodle’ is a way of life. Noodle reflects their culture, regions, cities, and people that cook them. Just the way southern Italians had to adopt to their dry weather and invent dry pasta, northern Italians leveraged local produce and sticked to fresh pasta. Shapes of noodles vary according to regions and many cultural regions, not to mention the different sauces and broth that are accompanied. A dish can tell you a lot about the region — but there seems to be one governing principle. Noodle is a comfort dish for a community: ‘Fare una spaghettata’ is an Italian expression literally translated as ‘to eat pasta’, but in reality is a whimsical way of saying “Getting together to eat and having a good time”. ‘无面不欢 (wu mian bu huan),’ similarly, is a saying that can be loosely translated to ‘no satisfaction without noodles.’ To both Chinese and Italian people, noodle is more than just staple food; noodle brings people together and therefore plays such an integral role in the food culture. Noodle symbolizes the communal spirit. Noodle embodies the regional identity. Noodle is a lifestyle in which people mingle together. 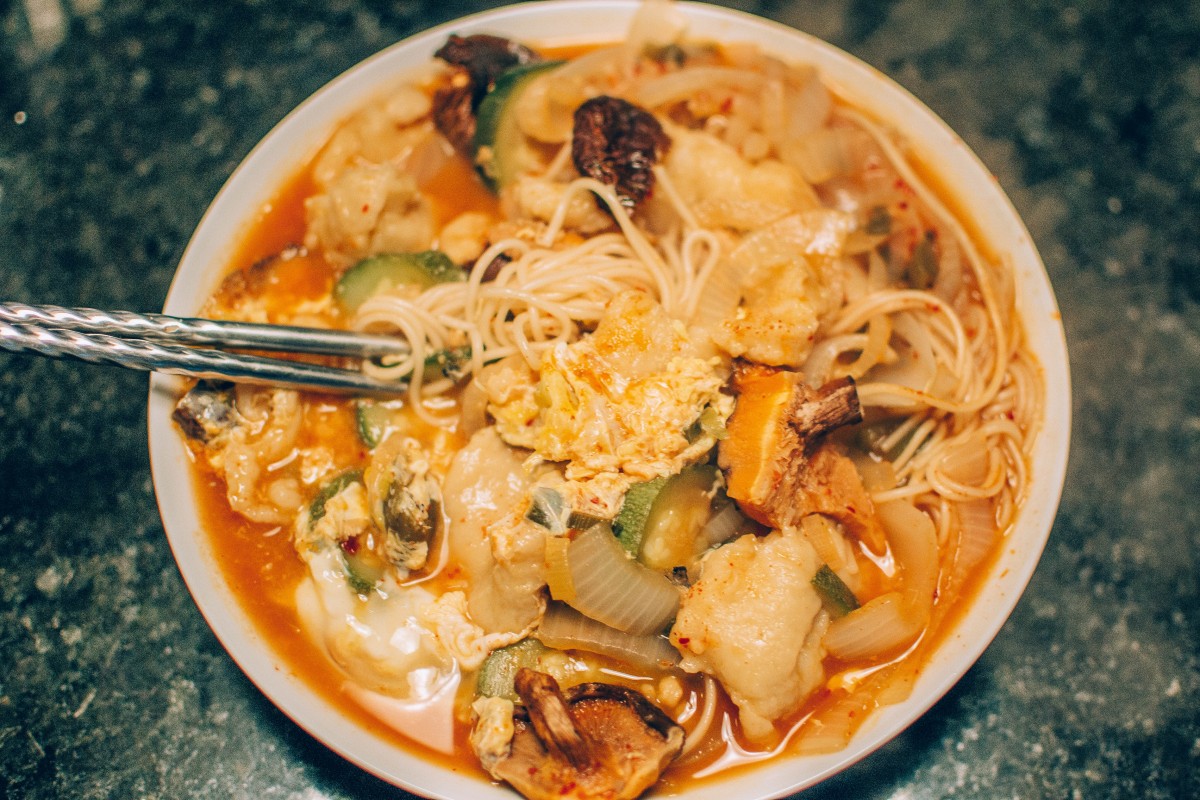 Wikipedia defines noodle as ‘staple food made from unleavened dough which is stretched, extruded, or rolled flat and cut into one of a variety of shapes.’ As an avid cook, I define noodle as a string that connects people to people; I went on my food instagram (@choidiningclub) to see how many noodle dishes I’ve made for my friends. The graphic I designed symbolizes ethnic identities that reside under the name of ‘noodle’ and the communal spirit. Noodle dishes are usually for groups and for togetherness. 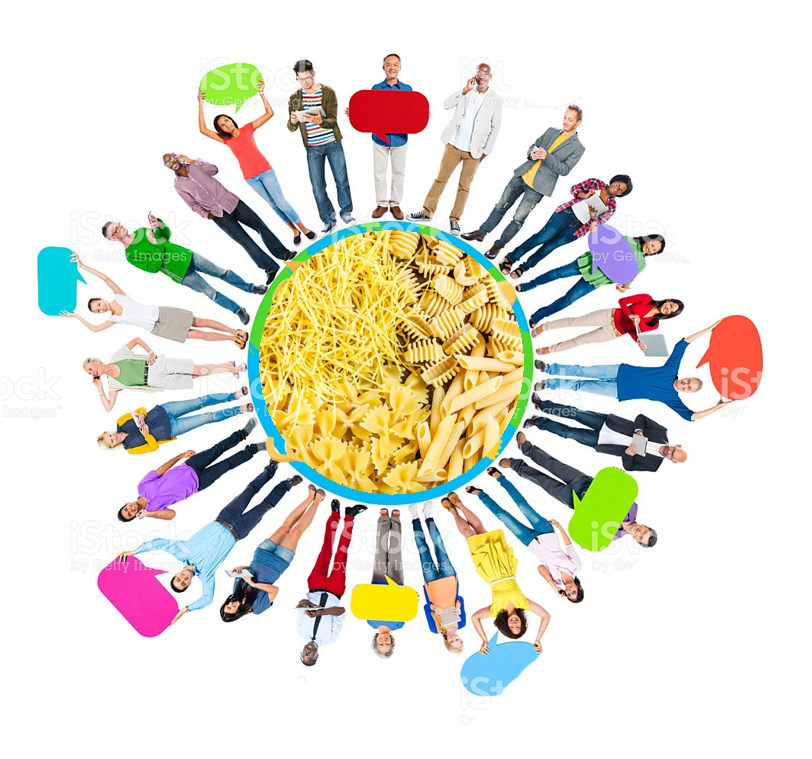 2 Replies to “Nooodle: A String That Connects People to People”