While growing up, travelling was an integral part of what we as a family did. When one adds up all of the hours me, my siblings, and parents spent in planes and airports, travelling to and from our international schools, offices, and family vacations, one can’t help but see the entire travelling process as a home away from home. Now, there’s a certain relaxation that I get from airports and planes, a sense of ease tied to having done the exact same thing countless times before.

However, with travel, as with many other things in life, things can’t be expected to always be smooth sailing. An inevitable part of this constant travelling was the development of several rules that helped our family deal with the countless surprises and stresses that we could be expected to deal with at any time: jetlag, potential flight delays, culture shock, and losing our bags to name a few. A lot of these were practical and sound, built up by my dad from his own personal experience and reinforced through our own insights when travelling as a family.

Pack light, avoiding luggage if you can. Make sure that you have three full sets of clothing in your carry on in case your luggage doesn’t arrive. Stay awake on the flight if you’re arriving at night. Bring refillable water bottles. Avoid drinking tea and coffee served on planes. Each of these rules have specific incidents and memories tied to them that allowed them to be instated into our family’s travelling canon. However, the one rule that has always existed, present even during my earliest memories of travel, is to remember to take the time to eat some food whenever something unexpected or distressing has come up.

Food holds a special space in my family’s heart. One might say it was the true motivation behind the constant travelling that we all did. Amazing explosions of taste and aroma characterize our best memories of the different places we’ve visited. Revisiting these meals automatically cause us to return to these points in our lives, reexperiencing the emotions and feelings that cemented our experience. I’ve included just one of the innumerable dishes that hold a storied place in my head and heart: mee pok dry.

Waking up a child that doesn’t want to be woken up is hard, even in the best of circumstances. Doing so after they’ve had a fitful sleep in their seat on a turbulent flight, one which landed at three in the morning in Singapore, is impossible. So when six-year-old me was faced with the prospect of having to pull my little roller bag out from the plane and into the brightly lit airport, you can only begin to understand the little waves of fury and resentment rolling off my tiny body. This anger caused me to refuse the help that my mother and father both offered, simply because I could not deal with the injustice of having been woken up. The annoyance that I felt only worsened when I realised the folly of my pride as we trudged down the halls of the all-too-bright airport. My bag suddenly felt far too heavy to drag across the carpeted floor and my feet felt like I was dragging them through thick mud. However, I could not turn back on my original refusal and ask my parents for help, because what kind of six-year-old would I be otherwise?

In my self-contained seething and rage, I had failed to notice that we hadn’t made our way to either the train station or the taxi stand. Instead, we had slipped behind one of the service doors at the airport, led by a member of the skeleton-shift service crew. As we made our way through this maze of doors and tiny service hallways, my anger began to wane as curiosity started to get the better of me. By the time the first little grumble from my stomach made itself heard, our guide pulled open a set of double doors and I was hit with this mouth-watering aroma of seafood, fish sauce, vinegar, pork, and chili. In the face of this stressful time, the wisdom behind the rule to get a little food to reorient myself had never seemed smarter. I eagerly sat down at one of the tables in this surprisingly busy employee food court, deep within the bowels of the Singapore airport. My father and his guide walked up to the counter where a stern old man was blanching several batches of mee pok (flat egg noodles) in noodle strainers. As they cooked, he quickly bustled over four bowls, throwing in a small amount of cooked pork mince, a splash of black vinegar and fish sauce, a large lump of sambal (chili sauce), and some oil. The mee pok came flying out of the strainers, tossed into the air once before being dumped on top of this sauce concoction. Then as if that were not enough, several pieces of blanched fish cakes and fish balls were placed on top of the steaming hot noodles, topping it all off. As my father brought the tray with four bowls of noodles and four extra bowls of hot dried fish broth meant for sipping on the side, my anger had completely given way to awe at this entirely new experience. That first bite of mee pok dry is something I will never forget, as the interplay of salty, sweet, umami, and sour flavours came rushing in on a bed of perfectly bouncy egg noodles. My desire to sleep quickly fell to the wayside as me and my family dug into our noodles, solidifying the importance of making a little bit of time to get some food whenever a problem comes up. 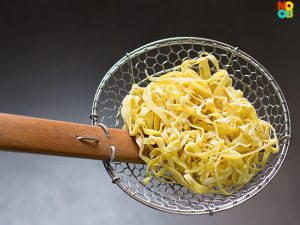