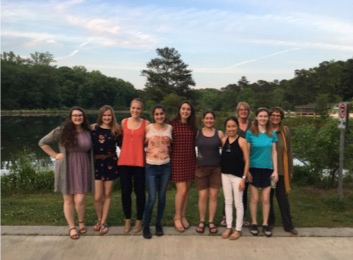 Dr. Lynne Nygaard received her B.A. in Psychology from Barnard College in 1985. She completed her Ph.D. in Cognitive Science at Brown University in 1991. After a Postdoctoral Fellowship in Psychology at Indiana University, she joined the Emory faculty in 1995.

Her research examines the perceptual, cognitive, biological and social underpinnings of human spoken communication. In particular, her research assesses the perceptual and cognitive flexibility found in language users across cognitive and social contexts. Her laboratory uses a variety of methodologies including behavioral assays, eye tracking, linguistic and acoustic analyses and neuroimaging. See the Publications page and Current CV for more information

Dr. Tzeng received her Ph.D. in Psychology from Emory University, following a B.A. in Psychology from Columbia University. Her research explores the cognitive mechanisms that underlie how we understand spoken language. Dr. Tzeng’s work integrates multiple disciplines, including psychology and linguistics, using experimental paradigms to infer cognitive processes from human behavior. Her research addresses two fundamental questions: (1) How do we organize and update representations of speech sounds in memory? and (2) How do we map speech sounds to their meanings?

Kaitlyn Matthews is an Indiana native who is crazy about brains. She received her Bachelor of Science in psychology from Indiana University in May of 2018. Currently, she works full time as a Research Specialist in the lab studying the role of phonological processing and attentional mechanisms in sound symbolic crossmodal correspondences of language. When she is not in the lab you are likely to catch her hanging out with her beloved pup, Stanley.

Motivated by the Big Question of how, as a biological species, humans have language, Dr. Finkelstein returned to school to pursue her second PhD (the first one is in theoretical physics from Georgia Tech). Her doctoral research at Emory concentrated on the involuntary swearing of Tourette’s Syndrome (TS). TS, in which people demonstrate involuntary motor, social, and linguistic behaviors, offers a window to the nexus between human language and the sensorimotor system. Finkelstein has expanded her interest in TS swearing to the production of swearing in the population at large, and she studies it behaviorally and neurophysiologically in collaboration with other faculty and students.

Dr. Revill’s main affiliation is with the Emory Facility for Education and Research in Neuroscience (FERN) where she manages the facility and helps new and experienced users take advantage of the capabilities of fMRI to address a diverse range of research questions. Outside of FERN, her primary research focus is on how listeners understand spoken language, using eyetracking to examine how context (your knowledge of the world around you or the words you have already heard) and load (internal or external factors that demand attention or effort, like a memory task or a noisy environment) affect the time course of spoken word recognition. Collaborations with the Nygaard lab include projects on sound symbolism, how foreign accents can act as a load during spoken language processing, and the neural substrates of voice processing. Dr. Revill has an undergraduate degree in Bioengineering from the University of Illinois and a PhD in Brain & Cognitive Sciences from the University of Rochester.

Kelly McCormick, M.A. is a doctoral candidate studying the cognition of language and cross-sensory mappings. As an undergraduate at the University of California, San Diego, she earned a BSc in Cognitive Science (neuroscience specialization) and minored in Linguistics and Spanish Literature. The aim of her current research is to better understand how sounds trigger meaningful representations in the brain, how information from the different senses combines and interacts, and how the external environment affects cognition. More about Kelly and her projects can be found on her personal website.

Eva Michelle Lewandowski, M.A. is a doctoral candidate hailing from New Jersey. She graduated from Montclair State University with a BA in Psychology (and a minor in Linguistics). She is interested in the relationship between speech, cognition, and social processing.  In particular, her work explores the fundamental links between speech perception and speech production, the flexibility of the speech apparatus, and the social consequences of language use.

Veronica Vazquez Olivieri completed her undergraduate studies at Emory University in Spring 2019. Her honors thesis focused on the Effects of primed speaker knowledge on speech perception. She is currently enrolled in the PhD Psychology program at the University of Chicago.