Oxford College Library exhibit of The Beat Generation & the Counterculture: 1940-1975

Whispers and tentative questions on the provenance of Jack Kerouac’s paint box gave way to critical reflection on the themes and values of the Beat Generation after a recent class visit to Oxford College Library to view an exhibit of The Beat Generation & the Counterculture: 1940-1975 .  Dr. Eric Solomon, Visiting Assistant Professor in English and American Studies (‘17G), asked his Introduction to American Studies students to identify one piece in the exhibit to interrogate after their assigned reading of Kerouac’s On the Road: The Original Scroll.   Solomon said that the Beats Exhibit fit perfectly with the framework of his course.  “They [the students] really get the enjoyment of discovering Kerouac’s paint box, or a draft of Howl that illuminates other Ginsberg pieces we’ve read.  They get the experience of encountering it in a tactile or aural way.”

The Beat Generation & the Counterculture: 1940-1975 went on display in the library’s Fran Elizer Exhibit Gallery in the spring of 2018 drawn primarily from manuscript and photograph collections held at Emory’s Stuart A. Rose Manuscript, Archives, and Rare Book Library. The exhibit maps the journey of the artistic movement’s unique influence on American creative expression and countercultural resistance over the course of three decades. 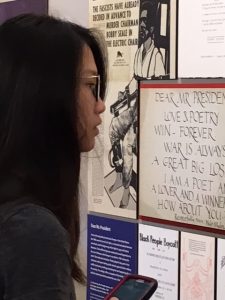 Jessica Fu (left), a freshman pre-business and accounting major from Statesboro, views a poster from the Reimaging Resistance portion of the Beats Exhibit with her cell phone ready to photograph the details of the image for her writing assignment.

Right away, Solomon’s AMST 201QW students found connections between the America the Beats traversed and current cultural conflicts reflected in the exhibits.  Students wrote responses based on one piece in the exhibition that resonated with them most.

Ryan Kwong, a second-year student and pre-business major from San Ramon, grew up in the California Bay Area and immediately connected with a poster captioned, Oakland.   “I never knew Oakland could have been potentially divided up into “black” and “white” areas considering how diverse it is in the Bay Area today.  Growing up, I only heard about this type of segregation occurring in the South, so it was a big surprise to see where I currently live today being possibly segregated back in the 1940s.”

“In ‘The Dream Machine’ exhibit, I was drawn to the recording of Allen Ginsberg’s “Howl” as read by the author himself.”   Elizabeth Beling, a Charlottesville, VA sophomore majoring in sociology and pre-law, focused her writing on the “intersection of unrest and notions of sanity and insanity among the beats.”  She viewed the overall exhibit as “the rallying cry of the countercultural movements of this era [as] pushback against notions of normalcy.” 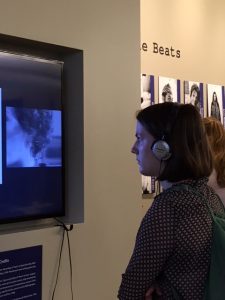 Emily Beling (left)  listens to the original recording of Ginsberg’s Howl read by Ginsberg himself.

Justin Burton, a New York sophomore pursuing a double major in physics and math/computer science, was intrigued by the different paths the Beats took as the counter-culture moved on to different movements.  “Amiri Baraka became a part of the civil rights movements, while Jack Kerouac became reclusive and conservative.  I believe this shows that members of this movement probably disagreed on many things, especially as the counter-culture evolved in the following decades.”

Pre-nursing sophomore Ninika Osuji of Washington, DC was prompted to reflect on the importance of dreams and aspirations, seeing Kerouac’s financial struggles as never limiting him in his quest.  “In the early stages of the road trip, he even denies a small Carnival job where he could’ve paused to make some money before he kept travelling, but instead he kept his eyes on the long-term goal: ‘the road is life.’”

Solomon developed this particular assignment to include something from the Beats due to their intersectional concerns and to allow for critical engagement with the exhibits.  “My pedagogical philosophy incorporates getting students outside the classroom, whether that’s a field trip, field work, or service learning.  I like to find resources for students to do the contextual work so they can engage directly with material and artifacts.”  His recommendation to instructors who are interested in having students use primary sources—“Digital archives are great, but there is something to be said for allowing students to occupy the space of the exhibit or the archive and understand that it’s fun.”  And it was FUN indeed!

What’s the value in exhibits like this to instruction and collaboration?   According to Courtney Baron, Oxford’s Head of Library Teaching and Outreach Services, “These collections make fantastic teaching tools because they foster active learning instruction, appeal to multiple learning styles, and inspire inquiry-based research.  Faculty interested in incorporating primary sources, artifacts, or digital collections into their teaching should view the Rose Library’s assignments portal for sample assignments and class session configurations.  Oxford College librarians can help faculty arrange visits to or from the Rose library to Oxford College for your classes.”  Contact Courtney Baron for more information.